Iconic sportscaster Bob Costas speaks with UT-Austin students in advance of his giving the 2018 Frank Deford Lecture on Sports Journalism.

Since the 1987 launch of WFAN in New York as the first all-sports radio station, sports radio has been a vital part of the sports media landscape. In recent years, changes in the industry, the emergence of new technologies, and the expansion audiences have redefined how we think of the synergy between radio and sports. This symposium will assess the future of sports radio through a discussion of station formats, networks and conglomeration, the growth of podcasting, relationships between hosts and audiences, and questions of identity, culture, and representation.

With that context, CSCM hosted the 2020 McGarr Symposium on Sports and Society: The Future of Sports Radio and Podcasting. The symposium was held as a Zoom webinar on October 22. This discussion will feature five professional (sports) "radio" hosts in dialogue with Eric Ferguson, longtime morning show headliner on Chicago's 101.9 The Mix. Panelists include

David Kaplan is a radio personality who hosts Kap and J. Hood on ESPN 1000 in Chicago in addition to co-hosting Sports Talk Live, a daily sports roundtable discussion show on NBC Sports Chicago. Kaplan has worked in Chicagoland media for some 30 years, hosting several noted drive-time radio shows as well has pre- and post-game broadcast of the Chicago Cubs. After a 21-year career at WGN Radio, Kaplan signed a multi-year deal with ESPN in 2015, where he works with Jonathan Hood on their morning sports-talk show. He is a graduate of Hamline University, where he received a B.A. in English.

Raheel Ramzanali has worked in Houston media since 2007, hosting radio shows 1560 The Game and ESPN Houston. Currently, he is a sports contributor to ABC13, where he hosts the 'No Layups' podcast, and a sports anchor on NTV Houston. In addition to radio and TV, Ramzanali also worked as the stadium reporter for the Houston Roughnecks in the XFL. He graduated with high honors from the School of Journalism in UT-Austin’s Moody College of Communication.

Sarah Spain is an Emmy and Peabody Award-winning radio host, TV personality and writer. She is the host of “Spain and Fitz.” airing weeknights on national ESPN radio, host of ESPN’s “That’s What She Said” podcast, a writer for espnW.com, a regular panelist on “Around The Horn” and “Highly Questionable” and a “SportsCenter” reporter. She won the 2019 Dan Jenkins Medal for Excellence in Sportswriting for her ESPN The Magazine article “Runs n the Family.” She is a graduate of Cornell University.

Tamryn Spruill hosts “The Hard Screen” podcast and works as a freelance journalist and author, covering women’s basketball, with issues of gender, race and sexuality central to her reporting. She has followed the WNBA since its 1996 inception and is writing a book (published by ABRAMS Books) about its exciting history. Spruill’s bylines include The Athletic, The New York Times,  ZORA, Teen Vogue, Bleacher Report, and Swish Hoops, where she also has served as editor-in-chief since 2018 when hired as the first woman to hold that position. Spruill has a B.A. from the University of South Carolina and a Master of Fine Arts degree in creative writing from Goddard College.

Jeff Ward hosts The Jeff Ward Show for the Statesman News Network, a streaming service produced by the Austin American-Statesman newspaper and hosted by their corporate parent Gannett Media/USA Today. Ward hosted a top-rated, afternoon drive-time radio show on AM 590 KLBJ in Austin for over 20 years, being named “Best Afternoon Show” five times by The Austin Chronicle. Ward is a graduate of UT-Austin, where he was a four-year football letterman and two-time All American place kicker, and has been a lecturer in the Moody College's Stan Richards School of Advertising and Public Relations.

Symposium moderator Eric Ferguson is the host of Eric in the Morning on Chicago’s 101.9fm The Mix, having established himself as a fixture on the city’s radio scene. Before Chicago, Ferguson hosted morning shows in Denver, central Florida, and the scenic locations of Rockford, Illinois and Allentown, Pennsylvania.  Eric in the Morning is an entertainment-based, lifestyle and caller-driven show in the Adult Contemporary format that is popular among Chicago’s 25-54 year old demographic. Ferguson is a graduate of the University of Iowa.

Rick Telander and Elizabeth Merrill have been named 2020 award winners by the Dan Jenkins Medal for Excellence in Sportswriting jury.
Telander receives the Lifetime Achievement award while Merrill is recognized for the best sportswriting of the year (2019). The winners will be celebrated in a video compilation under production. They will participate in the 2021 Jenkins Medal dinner and award ceremony when in-person events resume post-coronavirus.
This is the fourth year these national awards have been presented. They are named in honor of Jenkins, the legendary Texas sportswriter, to celebrate the craft and culture of sportswriting he personified through his storied career. 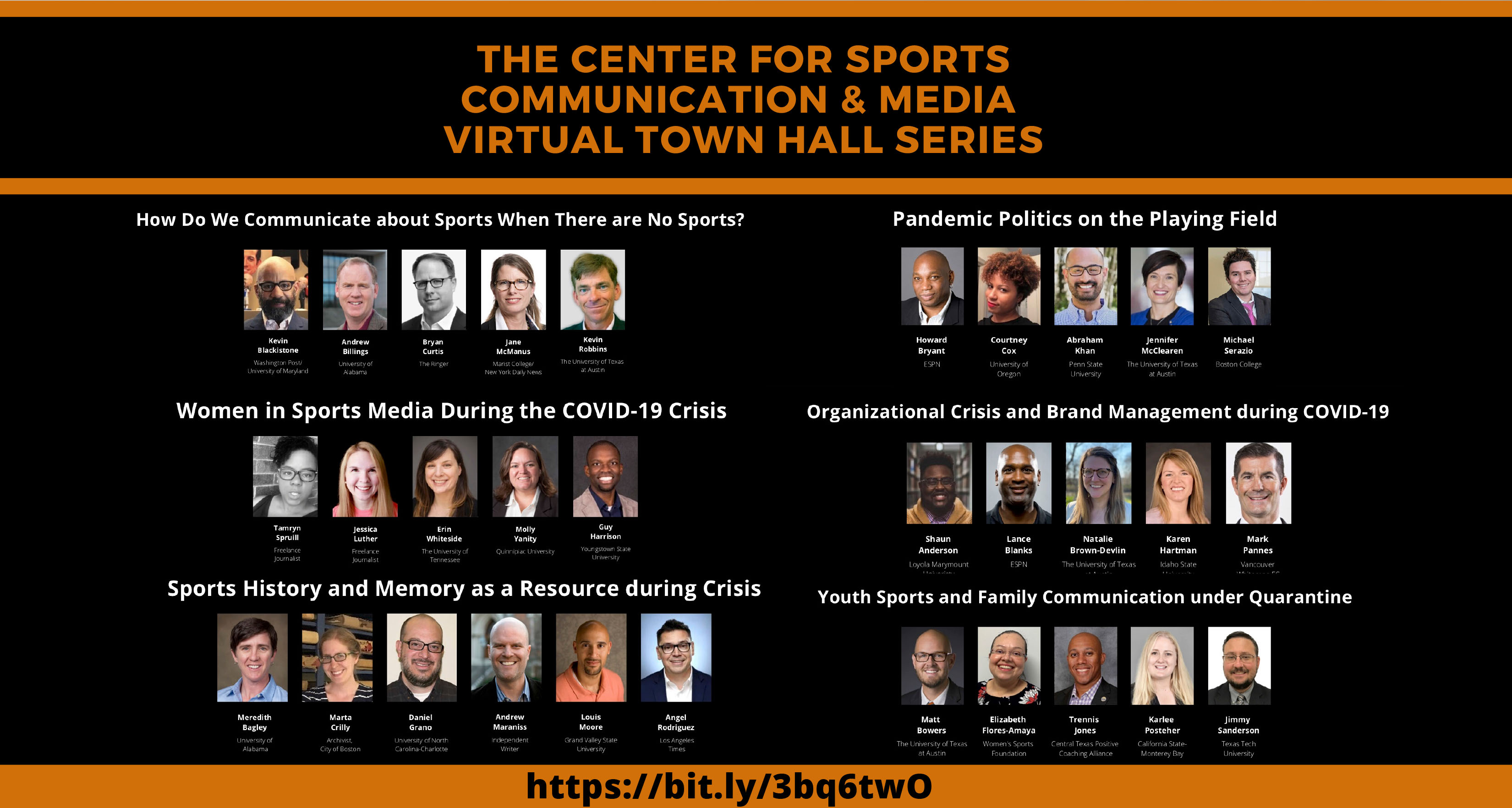 CSCM Director Dr. Michael Butterworth hosted six web-based roundtable discussions on various aspects of (American) sporting culture amidst the coronavirus pandemic. The conversations were recorded in April, May and June, 2020 with noted scholars, practicioners and writers on their respective topics.

The Center for Sports Communication and Media hosts the Frank Deford Lecture in Sports Journalism every April on the UT-Austin campus to hear leading professionals address the pressing cultural issues of the day. Named after the iconic journalist who left substantial bodies of work in print, radio and television at the time of his death in 2017, the Deford Lecture offers Moody College students access to the leading sports journalists of the day.

The Center for Sports Communication and Media hosts the Dan Jenkins Medal for Excellence in Sportswriting as a celebration of the craft and history of sportswriting. Named in honor of the legendary Texan and one of the most accomplished sportwriters of his generation, the Jenkins Medal is awarded annually at a dinner every fall.

IACS
IACSacademic
With #IACS21 happening next week, be sure to check out the conference program and lock in presentation times of you… https://t.co/m5GNwppywu
2 days ago

Center for Sports Communication & Media
UT_CSCM
Nobody: .... UTCSCM: 🎮👉✅ . . . . . UT students who own a PC and have a qualifying League of Legends account are we… https://t.co/HY7hRlgSjp
2 days ago

Mark Pannes
SandyMcFiddish
Exited to launch OTT Sports w/ @mbrought9 Check it out and let us know what you think... https://t.co/B6CG7MHdAv… https://t.co/2KPZr1dDkO
3 days ago

Center for Sports Communication & Media
UT_CSCM
Bernie is ready with his set up, are you?🤘🏽 🎮Registration for the UT Austin League of Legends Challenge is open! W… https://t.co/dJCEHogmBv
3 days ago
View all
Moody College of Communication