The Center for Sports Communication and Media screened the 2017 documentary, Tainted Blood (www.taintedbloodfilm.com), about the previous unspoken blood doping scheme among US cyclists at the 1984 Olympics in Los Angeles at the UT-Austin campus on April 12, 2108. Director Jill Yesko and film subjects Inga Thompson and Dr. John Hoberman participated in a panel discussion afterwards to comment on the issues raised in the film. Journalist and CSCM Fellow Patrick Hruby moderated the conversation. 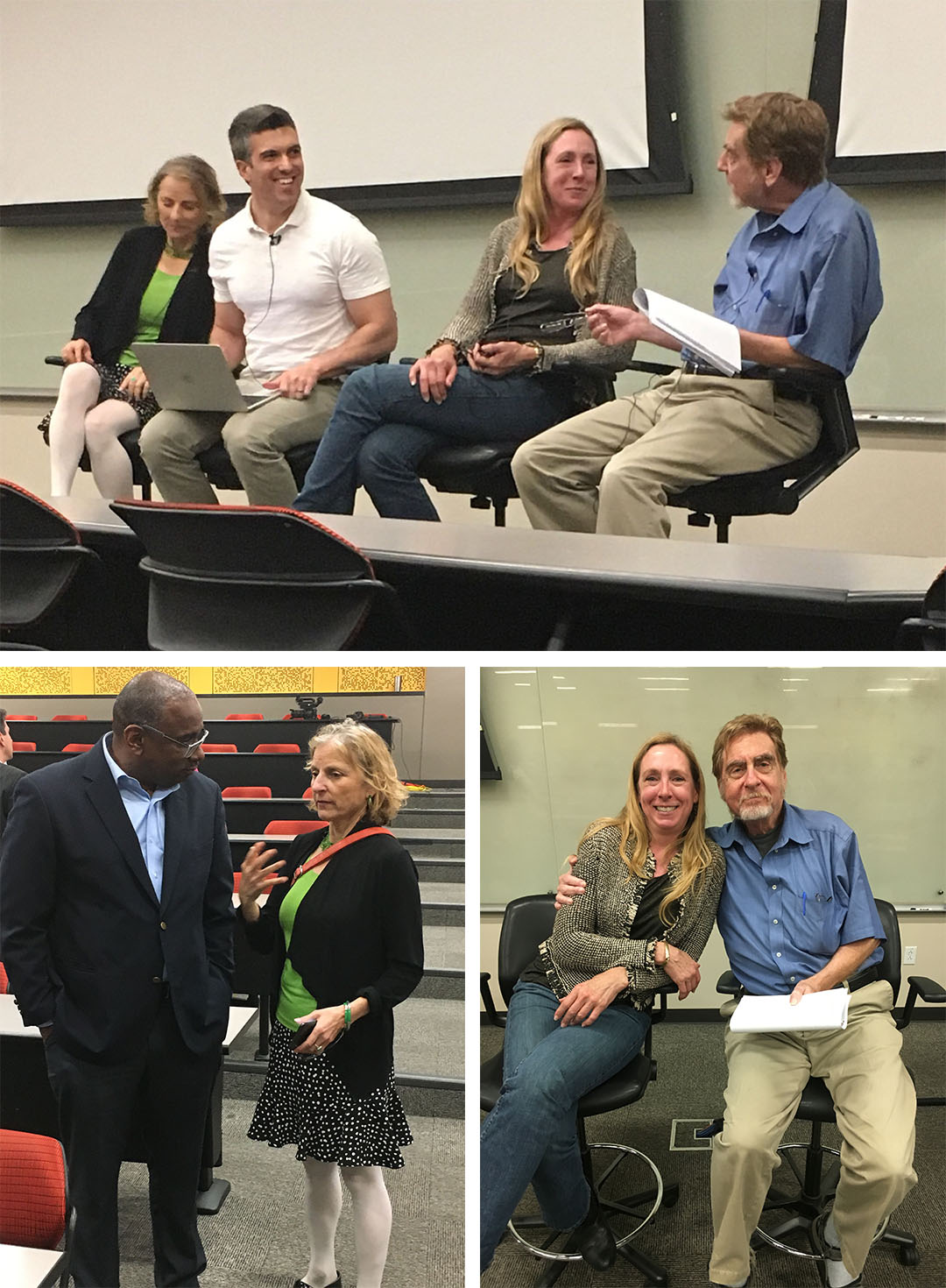 Tainted Blood connects the dots between how the politics and high stakes Olympic sponsorship money makes athletes pawns of their governments. Under President Ronald Reagan, the 1984 Olympics were an important propaganda tool in the Cold War. The pressure to win Olympic medals was extraordinary because the powerhouse Russian and East German teams boycotted the Games. In 1980 the American Olympic squad stayed home because President Jimmy Carter refused to send the team to Moscow.

Tainted Blood tells the story of the blood doping scandal from the point of view of the athletes. Through interviews with 1984 silver medalists Nelson Vails and Dave Grylls along with former world champion and 1984 Olympic team member Inga Thompson, Tainted Blood takes the viewer into the secret world where athletes push themselves to the precipice and are driven by coaches with their own Olympic fueled dreams. 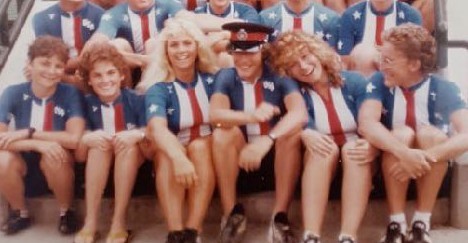 In 1983 I moved to Los Angeles where I raced against many of the athletes who competed in the cycling events at 1984 Olympic Games. As a competitive athlete living in Los Angeles before, during and after the Games, I had a first-hand seat to how that Olympics transformed the city and ramped up the pressure on American athletes to win gold medals in the name of the United States.

Even before the 1984 Olympics, the pressure on cyclists to win at all costs was evident. A fellow cyclist confessed he was using steroids and told me that I was naive to think that wasn’t the case with others. Just before the Olympics, Cindy Olavarri, a promising cyclist who qualified for the first-ever women’s Olympic road race, mysteriously withdrew from the team citing “mononucleosis.” It was later revealed she had tested positive for steroids.

In the months leading up to the Olympics you couldn’t read a newspaper or watch a television commercial that didn’t admonish Team USA to win. Today we take this kind of hype for granted, but the 1984 Los Angeles Games were the first so-called corporate Olympics, meaning that athletes, coaches and sports federations now had to appease big money sponsors like Coca Cola and United Airlines.

Even with all the hype, I attended the Games and cheered until I was hoarse as American cyclists won medals. When I read about the blood doping scandal in the months following the Olympics, I felt sick to my stomach. I knew some of these athletes—cycling then, as now, is a small world. It was a betrayal that I took personally.

I retired from racing in 1988 to attend graduate school. In the 1990s I worked as a newspaper reporter and contributing editor for Women’s Sports & Fitness magazine and other sports publications. But the blood doping story was always in the back of my mind. From time to time I would tell younger cyclist about it and they would shrug their shoulders. The story meant nothing to them.

The Lance Armstrong doping scandal changed the public discussion about doping. Suddenly the whole world was focused on doping in cycling. I knew the time was right to tell the 1984 blood doping story. In 2014 I began making Tainted Blood. What I thought would be a straightforward project quickly hit a major roadblock. The United States Olympic Committee (USOC) and the International Olympic Committee (IOC) refused to allow me to license Olympic footage. While they didn’t give a reason, I strongly suspect that they didn’t want any negative press regarding the 1984 blood doping.

The USOC and the IOC are powerful entities who exert iron fisted control over the Olympic logo and Olympic trademarks. It was a David and Goliath situation. To get around this—how do you make a movie about the Olympics without Olympic footage?—I scoured photo archives and chased down photographers for still from the 1984 Games.

I reached out to all of the cyclists who blood doped at the 1984 Games (some had died while others were unable to be located) to include them in the film. Not one of the cyclists who blood doped agreed to participate! This told me I was onto something important. If they had nothing to hide, why not tell their side of the story? I was disappointed that Eddie Borysewicz, the Polish-born, charismatic coach of the 1984 team agreed then withdrew his participation in the film.

As a journalist I know the importance of providing balance to a story. I did not want Tainted Blood to be a lopsided film. To give voice to those who declined to participate I included on-the-record quotes throughout the film.

Filming continued for two years. My interviews took me from the Snake River Valley in eastern Oregon to the packed streets of Manhattan. After a year and a half of post production, Tainted Blood premiered June 19, 2017 before a crowd of more than 100 people at Baltimore’s Handle Bar Cafe. Tainted Blood had its international premier at the Rueda Film Festival in Barcelona, Spain in October of 2017 and is streaming on Amazon.

While I received some support from crowdfunding, Tainted Blood was made with my own funds. As a first-time filmmaker I learned by doing. I hired professional crews and other professionals who helped create a film that I am immensely proud of. I’m also proud to be a member of a select group of women who make sports documentaries. While we may be small in number, we are mighty.

(pictured on the far left in the women's cycling team picture)

In 2017 the world was rocked by the news that Russian government had been carrying out a massive state-sponsored doping program that involved nearly all of their Olympic athletes and resulted in 49 Olympic athletes being stripped of their medals. From 2011 to 2015, more than a thousand Russian competitors in various sports, including summer, winter, and Paralympic sports, benefited from this doping cover up.

Alarmingly, many of the 1984 Olympic cyclists were transfused with other people’s blood—this at a time when AIDS was a deadly, and little understood disease. Some of the athletes became so ill from the transfusions they ran spiking fevers.

“I think blood doping is cheating,” Dickson recalls. “These athletes were coerced into doing it. I doubt that anyone would have done it on their own.”

The coaches and athletes claimed that because there was no official rule against the blood doping (blood doping was officially banned months after the 1984 Olympics), they were not not technically at fault—even though the head coach had been specifically told not to blood dope.

The stigma of having doped at the Olympics continues to haunt these athletes. One cyclist who blood doped hid his silver medal in a drawer for years because he was too ashamed to look at it. Thirty years after the blood doping, the athletes still refuse to talk about the incident out of embarrassment and the feeling that they have been singled out for censure.

With the profusion of doping scandals in all sports along with the threat of future Olympic boycotts, Tainted Blood gives viewers a highly personal and behind the scenes looks at why athletes dope and why consequences of their doping haunt athletes for the rest of their lives.