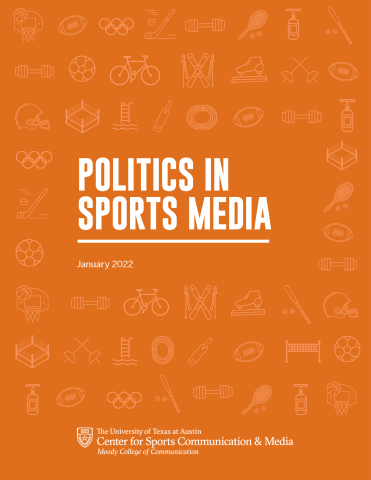 The Center for Sports Communication & Media (CSCM) at The University of Texas at Austin is proud to announce its first annual report, “Politics in Sports Media.” This comprehensive study of sports media content in the United States captures a range of audience perceptions and details critical issues in sports media.

The report’s research team includes 16 faculty members and graduate students, mostly in the Moody College of Communication. The team was led by Dr. Natalie Brown-Devlin, Dr. Jennifer McClearen, and CSCM director, Dr. Michael L. Butterworth. “Politics in Sports Media” defines “politics” broadly to include references to campaigns, elected officials, and legislation as well as matters of power, resources, and equity. The relationship between sports and politics is neither new nor temporary and CSCM plans to issue this report each January. Highlights for 2022 include:

Highlights from the 2022 Report

Athletes and Sharing of Political Beliefs

Survey participants for the 2022 Politics in Sports Media report were asked why they did or did not feel athletes should share their beliefs publicly on sports media platforms. Their open-ended responses were used to generate word clouds by party identification. The word cloud generated from Democrats’ responses featured keywords such as “freedom,” “beliefs,” “interested,” and “human,” which highlights the fact that they were, generally, more supportive of athletes using their public platform to share their thoughts on political subjects that interested them. The word cloud generated from Republicans’ responses featured keywords, such as“entertainers,” “play,” “game,” and “paid,” which highlights the fact that they generally preferred that athletes separate their personal beliefs from the playing of the sport, preferring that political beliefs and sports remain separate.

Some of the participants offered their own comments.

From a Democratic respondent: “Athletes often have a far-reaching platform and can do a lot of good by stating their opinions. Their willingness to speak up can encourage others to do the same, creating an active electorate.”

From a Republican participant: “Absolutely not. Sporting events are an enjoyable distraction from all of the negativity which includes politics. Give the fans a break.”