Rick Telander and Elizabeth Merrill have been named 2020 award winners by the Dan Jenkins Medal for Excellence in Sportswriting jury.

Telander receives the Lifetime Achievement award while Merrill is recognized for the best sportswriting of the year (2019). The winners will be celebrated in a video compilation under production. They will participate in the 2021 Jenkins Medal dinner and award ceremony when in-person events resume post-coronavirus.

This is the fourth year these national awards have been presented. They are named in honor of Jenkins, the legendary Texas sportswriter, to celebrate the craft and culture of sportswriting he personified through his storied career.

Telander is a senior sports columnist for the Chicago Sun-Times, where he has written since 1995. He started his career as a Special Contributor at Sports Illustrated in 1973, later becoming Senior Writer in 1981, working as college football beat reporter. There he reported on football program scandals at the University of Miami, University of Oklahoma and Southern Methodist University, among others. His 1988 profile on South Carolina’s Tommy Chaikin, chronicling the dangers of steroid use, “The Nightmare of Steroids,” is a defining piece of his work from that era. Telander’s 1990 book The Hundred-Yard Lie addressed the problems in college football and is among nine books he has published. He is a graduate of Northwestern University, where he was an all-Big Ten cornerback for the football team.

"No matter what the publication or form, Rick Telander has always written from a place of total authenticity, and with the spirit of inquiry that is the heart of all great journalism," said Jenkins Medal Co-chair Sally Jenkins, who is a longtime sportswriter herself and the daughter of Dan.

Merrill receives the 2020 Jenkins Medal for Best Sportswriting award, a citation for Whatever Happened to Villanova Basketball Star Shelly Pennefather? ‘So I Made This Deal with God’, published by ESPN. Merrill profiled Pennyfather, the dominant 1987 woman’s basketball player at Villanova University, who would go on to accept a calling to live as a cloistered nun. The article documents the reunion of her family and friends, seeing her for the first time since entering the Monastery of the Poor Clares, at her 25-year jubilee celebration.

Merrill is a Senior Writer at ESPN, working in their features/enterprise unit. She wrote previously at the Omaha Herald-World and Kansas City Star. She is a graduate of the University of Nebraska at Omaha.

“The Center for Sports Communication & Media proudly presents this year’s Jenkins Medal awards to recipients who embody the characteristics that made Dan Jenkins a sportswriting legend. Lifetime achievement winner Rick Telander has combined his own experiences as an athlete with his love of literature to bring sports stories to life with clarity and nuance. His writing on college athletics is essential, and his reporting on steroids and corruption continue to be relevant. He has made a national impact while remaining a Chicago fixture, playing an instrumental role in the transformation of sports journalism and television.

Annual award winner Elizabeth Merrill has crafted a uniquely memorable profile in her story about Shelly Pennefather. The feature is beautifully structured around the themes of spirituality, family, and purpose, and the language brings readers into the lives of Pennefather and those who love her. Perhaps most remarkable is Merrill’s ability to find insight in the life of a central character with whom she could not speak. It is a spectacular piece of reporting and writing.” 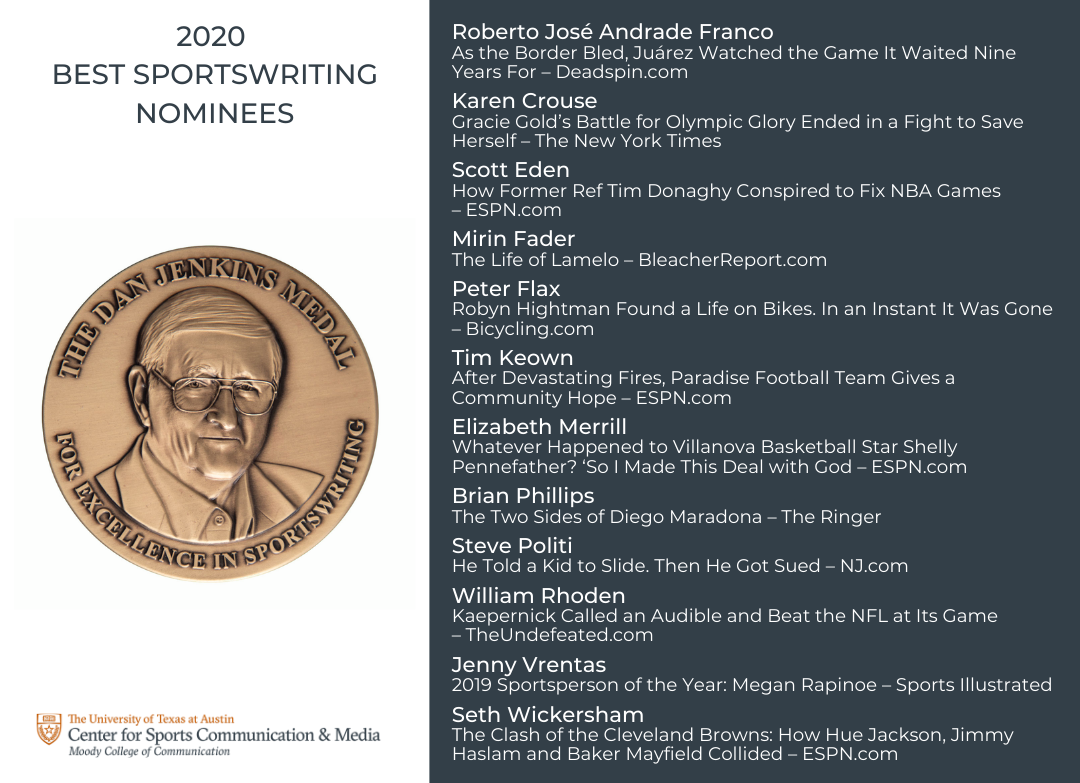