After 11 years as dean of The University of Texas at Austin Moody College of Communication, Dean Roderick P. Hart announced he will step down effective Aug. 31, 2015.

"There is more work to be done, of course, and for that we need a new dean with fresh ideas," Hart said. "That dean will lead a college with selective, and popular, undergraduate majors, thriving graduate programs and academic departments that compete for the best talent available anywhere. Our new dean will inherit a superior faculty, wise administrators, a dedicated and gifted staff and a group of alums and friends who care about the Moody College intensely."

"A favorite with students, faculty, staff and alumni, Dean Hart will go down in the college’s history as a pivotal leader," Powers and Fenves wrote in an announcement to the campus community. "Rod has been not only a steady hand in a time of rapidly changing media environments and economic challenge, but an active leader who has transformed the college for the better." 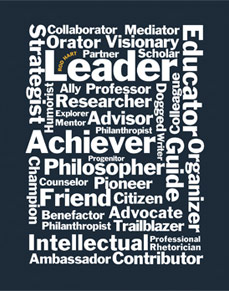 As dean, Hart has overseen numerous academic and fundraising initiatives, including the construction of the Belo Center for New Media, the renovation of the Jesse H. Jones Complex, and the $50 million donation from the Moody Foundation, which will result in the largest endowment for the study of communication of any public university in the nation.

He established the Denius-Sams Gaming Academy, the Texas Program in Sports and Media, the UT3D Program, the New Agendas Conferences, and the Center for Health Communication. He also helped establish the KUT Public Media Studios in the Belo Center and the creation of the all-music NPR station KUTX 98.9.

In addition to serving as dean, Hart has served as professor in the Department of Communication Studies since 1979. He also served as founding director of the Annette Strauss Institute for Civic Life from 2000 to 2012 and founding director of the Senior Fellows Honors Program from 1987 to 1995. With a research focus in politics and the mass media, Hart has written 12 books — most recently "Political Tone: How Leaders Talk and Why." He is also the author of DICTION 7.0, a computer program designed to analyze language patterns.

To honor Dean Hart, the Moody College seeks to create the Roderick P. Hart Student Achievement Awards – a $1 million permanent endowment to honor the two things Hart prizes most – our students and their intellectual accomplishments.

The Hart Awards will celebrate exceptional student work and provide three awards annually in each department—one for undergraduates, master’s students, and doctoral students. Additionally, the awards will provide stipends to graduate students assisting with long-term research projects in civic engagement.