About the Moody Gift 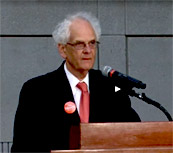 On Oct. 21, 2013, the Moody Foundation of Galveston announced a $50 million commitment to establish the Moody College of Communication at The University of Texas at Austin.

This legacy gift for current and future generations of Texans resulted in the largest endowment for the study of communication of any public university in the nation. It ensures that for generations, Moody College can recruit the best professors, best administration and best undergraduate and graduate students.

The gift enabled the Moody College to compete with the top universities in the nation—both public and private—and positioned The University of Texas at Austin as the premiere university in the nation for communication scholarship and education.

The Moodys of Galveston have established one of the most prosperous entrepreneurial and philanthropic legacies in the country.

The Impact of the Gift

The Moody College of Communication is poised to become the national and international leader for the study of communication.