Parshuram Hotkar just received his doctoral degree from The University of Texas. He studies operations management and is known as Parshu.

A pair of simple syllables, released upon respiration, comprise perhaps the most significant fact and descriptive detail of his life. These sounds are his name, a word that until he came to the Michael and Tami Lang Stuttering Institute, he, like many other people who stutter, refused to say. 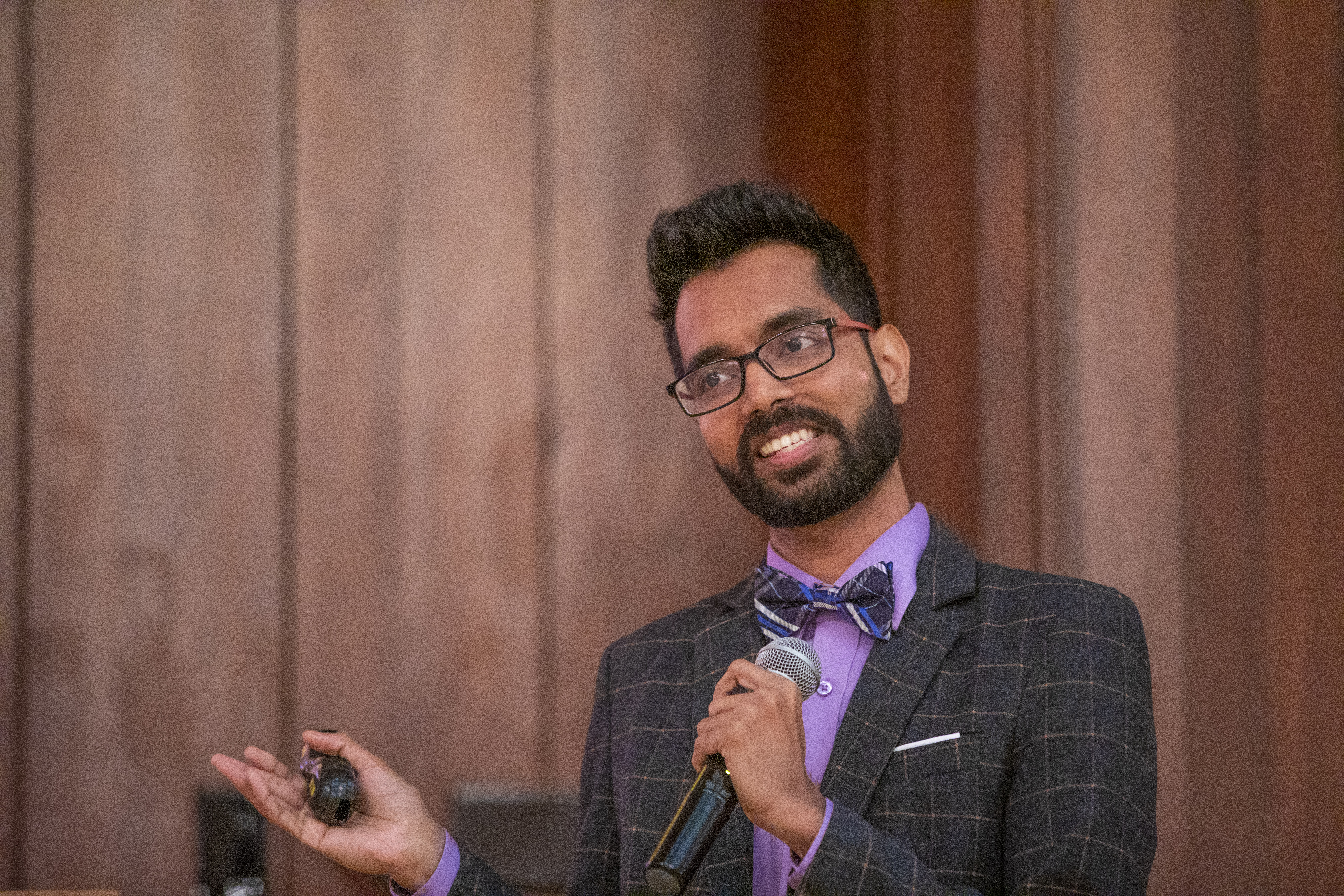 Parshu is one of the millions of Americans who live with a stutter, a neurophysiological communication difference that involuntarily interrupts the forward flow of speech. In the moments between planning their words and saying their words, people who stutter encounter unpredictable starts and stops. Though the etiology is not psychological, many develop fearful anticipation of their next repeated sound or prolonged syllable.

Even the simple act of ordering a meal can become a struggle between acceptance and avoidance.

The Lang Stuttering Institute is a theory-proven resource for people who stutter. Thanks to a landmark gift from Michael and Tami Lang in 2014, the institute was founded to eliminate geographical and financial barriers to evidence-based healthcare, and in the five years since has advanced global knowledge about the onset and persistence of stuttering, treated at no cost more than 1,000 clients, from preschool children to retired adults, and trained students and professional practitioners in its modernized methods.

“Stuttering, if left untreated, can become a prison. Everyone has experienced fears of failure, rejection and ridicule, but for the person who stutters these fears are magnified,” institute founder Courtney Byrd said. “When they learn that communication transcends fluency, their focus shifts from worrying about how people will perceive them because of their stutter to focusing on how they want to be remembered.

“And, through that critical shift, they are empowered to speak freely.”

Byrd joined the Moody College faculty in 2006. Her early work as a communication sciences and disorders researcher revealed the need to treat the person and not the disfluency. Her vision to enhance treatment and practitioner training formed into the endowed institute and its signature programming.

Communication Excellence and Camp Dream.Speak.Live. rely on evidence-based, holistic treatment, and these individualized therapeutic models move beyond standard medical practice, which induces what Byrd refers to as “false fluency.” 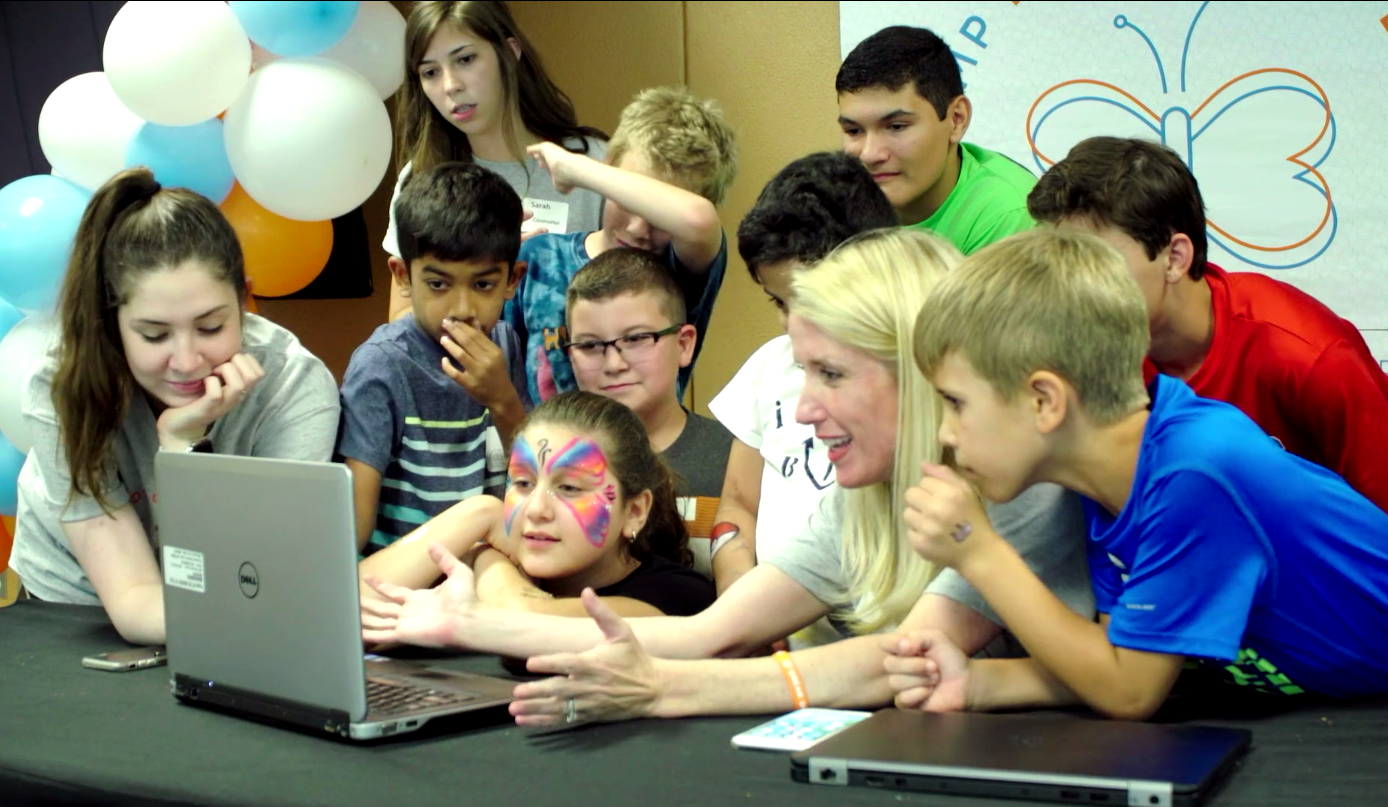 The Lang Stuttering Institute is distinct from all other non-profit stuttering organizations in that it is affiliated within a university, and this setting fosters innovative research, quantifiable outcomes and timely translation of theory into groundbreaking practice.

Children, teenagers and adults who stutter receive free, daily treatment through the Communication Excellence program, which focuses on core communication competencies, such as maintaining eye contact, particularly during moments of stuttering, using voice and gestures to emphasize meaning, and engaging listeners with positive demeanor. Participants also build resiliency through mindfulness, self-compassion and advocacy.

Camp Dream.Speak.Live. is the institute’s annual free, intensive therapy program for children who stutter. As they learn that what they say is more important than their stutter, children demonstrate measurable and lasting improvements in building relationships, overall communication ability and leadership skills. They also develop a more positive view toward their quality of life.

“There are conflicting perspectives, even across academic literature, as to why children are bullied,” Byrd said. “Are they targets because they are socially reticent? Or is their disposition an outcome of being bullied?

“Our aim is to help every child who stutters realize their potential, and our longitudinal data demonstrate they are significantly less likely to be stigmatized.”

Stuttering is a speech disfluency which is still largely misunderstood by the public and speech therapists alike. Education and awareness are essential, and Byrd’s intention is to establish institute protocol as scientifically-grounded best practice for the stuttering community worldwide.

The institute is working with UT System institutions to standardize curriculum related to stuttering assessment and treatment. Additionally, Camp Dream.Speak.Live. and Communication Excellence programs have been manualized and replicated across the state, nation and world.

“Lang Stuttering Institute programs and the related results cannot be solely captured by statistical significance. The experience is life-changing, no matter the culture, the language or the location,” said Kurt Eggers, president of the European Clinical Specialization in Fluency Disorders and president-elect of the International Fluency Association.

Global faculty affiliates have helped facilitate institute programming in Belgium, Ireland and the Netherlands. Future Camp Dream.Speak.Live. programs are confirmed for Portugal, Greece, Malta and then the next stop for Byrd is Israel.

Vivian is a young teenager who has participated in both Communication Excellence and Camp Dream.Speak.Live. When she first moved to Austin, still adjusting to English along with her native German, Vivian was misdiagnosed as having a learning disability and spent two years in a specialized classroom. The school’s therapeutic accommodation also required that she not be called on during class which resulted in further negative attention and teasing from classmates.

“The first time in my life I ever felt like I could be myself, like there was nothing wrong with me, was at the Lang Stuttering Institute,” Vivian said. 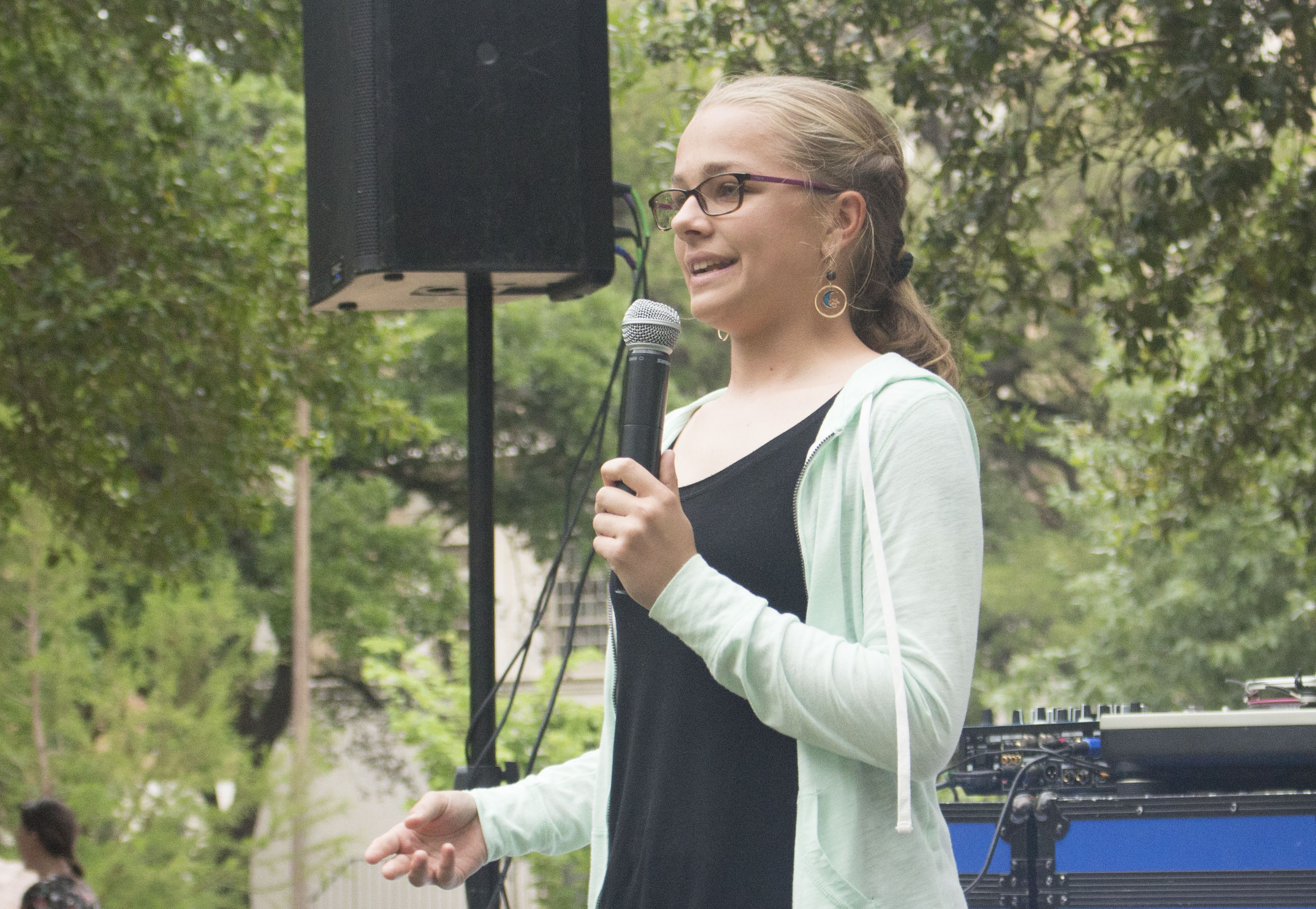 A 2016 research study produced by the institute showed that less than 1 percent of practicing professionals in the United States self-identify as a willing service provider or specialist with regard to stuttering, its nature and treatment. But nearly all practicing clinicians report they have someone who stutters on their caseload.

The majority of accredited undergraduate programs allow students to graduate with minimal to no exposure to stuttering, and they go on to treat individuals with antiquated fluency strategies. Methods to control stuttering are difficult to maintain outside of the clinical environment, and failed attempts at fluency then only promote distrust of their natural voice.

Prior to finding the Lang Stuttering Institute, Vivian and her family experienced a variety of treatment settings. They paid out of pocket for private practice therapy and also sought help from school district speech therapists.

“The lack of expertise in stuttering is disillusioning. There were many assumptions, and I saw my daughter retreat within herself,” said Constanze, Vivian’s mom. “Once we got Vivian into the institute, it was like a light switch turned on. Her smile was different. My daughter finally felt heard, and she hasn’t stopped talking since.” 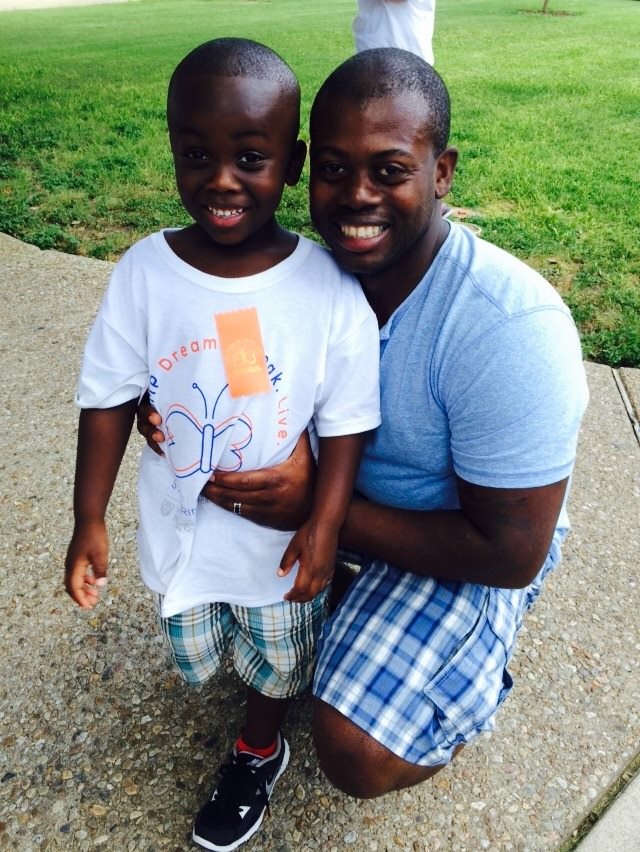 “I would have given my life to have this when I was a child. Because of the Lang Stuttering Institute, my son will never know the struggles I did." – Stephen Washington, Jr.

Stephen III attended Camp Dream.Speak.Live. He and his father remain engaged by creating uplifting video messages to be shared with others who stutter.

The institute treated 100 children and adults in its first year of operations; more than 300 were served in 2018-19. The waitlist has nearly tripled and continues to grow globally.

Limited to Byrd, one full-time clinical fellow, one part-time speech-language pathologist and a part-time program administrator, the institute maximizes its resources and reach with university graduate and undergraduate students, as well as volunteer speech-language pathologists. Student practitioner training and a comprehensive list of volunteers are both a means to serve the greatest number of people in need and also more skillfully equip clinicians.

“There’s something to be said about a grassroots effort,” Byrd said. “We’ve expanded not because we have a large team, but because the people who come through our doors are inspired to tell others about their experiences.”

The institute’s body of work, its focus and impact resonate even with those who do not stutter. Last spring, the Dealey Family Foundation stepped forward with a financial gift to expand the institute’s footprint.

“I became very impressed with the work the institute is doing for the greater good, for these clients who are being profoundly affected in a very positive way to overcome the difficulties sociologically, mentally and as individuals growing up in a society that communicates so much,” said Joe Dealey, Jr., chairman and president of the foundation.

In pursuit of his Ph.D., Parshu’s daily life includes conversations with future managers and fellow researchers, as well as classroom lectures.

After one semester in the Communication Excellence program, Parshu instructed a business school course. His students signed a thank you card at the end of the term, writing that he was one of the most amazing instructors they had experienced.

Parshu also participated in a research paper presentation and is now navigating the process of applying for a faculty position.

“The Lang Stuttering Institute changed my life,” Parshu said. “My stuttering does not stop me from engaging in the most basic to the most complex of exchanges. Wherever I go, I carry what I learned at the institute. My goal is to make Dr. Byrd and everyone at the institute proud.

“Now, I not only say my name, but I seek opportunities to say it.”