The first Pride March happened in New York City in 1970, to commemorate the Stonewall Riots that happened a year earlier, when police raided a Greenwich Village bar called the Stonewall Inn and dragged out many of the patrons. Six days of riots and protests ensued. Many consider it the start of the gay rights movement.

The march at that time was called Christopher Street Liberation Day, in recognition of the street where the Stonewall Inn was located. June didn’t get officially dubbed Pride Month until 2000, by President Bill Clinton, who called it “Gay and Lesbian Pride Month.” In 2011, President Barack Obama made the title more inclusive, changing it to “Lesbian, Gay, Bisexual, and Transgender Pride Month.” No matter the name, the spirit has remained the same: freedom, equality and the ability to be who you are and love who you want.

In honor of Pride Month, we talked to several Moody College faculty, who shared their personal stories and what pride means to them. Here’s what they had to say: 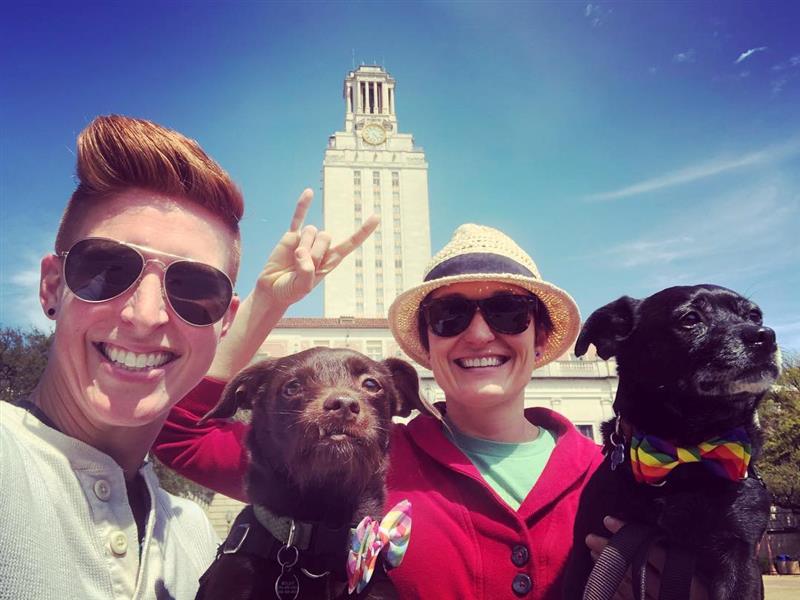 Kate Osmond and Jenn McClearen met in 2007 in graduate school in the small town of Brattleboro, Vermont. They said they still go back today to eat Ben & Jerry’s and visit the cows. McClearen’s book "Fighting Visibility" addresses LGBTQ athletes. She said Pride Month is an opportunity to celebrate these communities despite mounting challenges. “This past year has been tough for LGBTQIA+ folks because so many states are passing laws that threaten our rights and freedoms,” she said. McClearen loves the quote from trans activist Chris Moiser: “Thriving is a form of resistance." "Pride month is an avenue for showing how their communities are thriving while resisting, she said.

Osmond and McClearen said it’s important to amplify LGBTQIA+ and diverse identities year-round. “While Pride is all about celebrating LGBTQIA+ love and joy, it’s important to commemorate the origins of pride and those who fought for rights and equality,” said Osmond. "Pride honors events like the Stonewall Riots, and others, often led by QTPOC (queer and trans people of color) and it’s critical that those who laid the groundwork for today’s festive atmosphere are credited and celebrated, too.”

For LGBTQIA+ students who may be having difficulty finding their community on campus, Osmond and McClearen encourage them to keep looking. UT and Austin are big places and there’s a good chance that others are out there seeking a similar community, they said. “You may have to build it yourself but it’s possible." 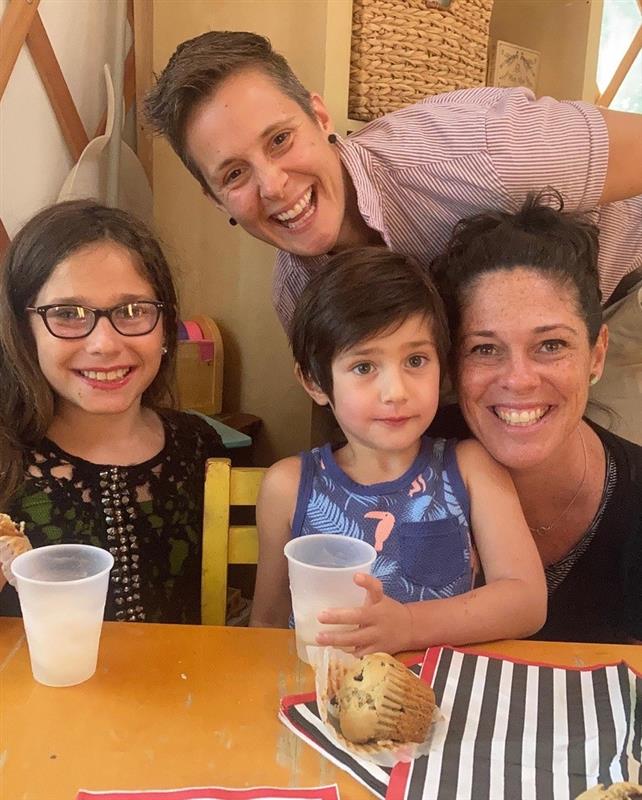 Professor Erica Ciszek is from Plainville, Connecticut. For them, coming out is not a one-time thing, it happens every day. “I have 'come out' several times in my life in major ways, and nearly every day I 'come out' in micro-ways. At the doctor’s office, grocery store, and my child’s school. I come out about my sexuality and I come out about my gender identity.” They said coming out is a form of disclosure and transparency that requires trust.

For Pride Month, Ciszek wants people to do their homework, read queer media, listen to queer blogs and follow queer influencers. At Moody, they teaches public relations and their research and teaching are closely tied to commitments to advocacy and social change. “There is a growing body of research in queer media, but there is a dearth of research on trans media and communication. More scholarly attention is needed to the work of gender diverse producers.”

They said there are many different queer communities on and around campus. “One of the perks of being in Austin is that I can show up to testify at the Capitol on legislation that impacts LGBTQ people.” 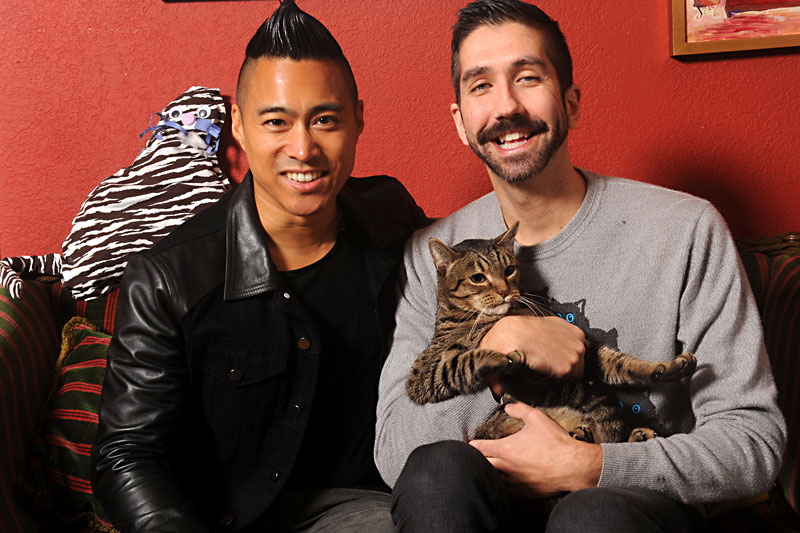 PJ Raval and Curran Nault first met through mutual friends at a number of queer community events in Austin. But their relationship really took off in Galveston while collaborating on PJ's queer documentary, “Before You Know It”. “We’ve now been together for over a decade, raising our cat kids, and staying creative, community-driven, and crazy queer too,” PJ said.

When thinking about Pride Month, PJ and Curran harken back to the Stonewall Riots at its roots and what that stood for: resistance to oppression. But they said Pride month is also about good times, about holding onto queer joy in a society that says queer people are supposed to be ashamed and miserable. “My hope is that Pride month reminds us of our radical roots and our freaky fringes, and encourages us to keep on resisting injustice, wherever we see it."

As creatives, they encourage people to support a wide array of LGBTQIA+ stories, to fully reflect an ever-changing and diverse community. "It's equally important to make sure we are also telling our own stories, from within our communities," they said.

Both PJ and Curran acknowledge how difficult it can sometimes feel to build community but encouraged students to explore all the amazing queer organizations, events, classes and space on campus, including visiting the Gender and Sexuality Center, which has all sorts of information and events for students. "If you haven't found your people yet, don't worry, you're not doing something wrong," they said.

While Pride month is an amazing time for celebration, it's just that — a month. "The implication that we can commemorate and contemplate for a certain period of time and then move on to the next thing. Of course, oppression doesn't take a rest," they said.

They encouraged the queer community to be vulnerable all year round, especially in the current political climate. But above all, they said, enjoy it. "It's summertime after all, and queers have always been good at finding fun, even in the hardest of times. We all could use some lightness and laughs right now. So, pursue your pleasures, get to dancing and to living, and keep on queering it up!"