Created by the 2016 class under the guidance of Spector and other industry veterans, “Roots of Sarkos” debuted at a release party on campus so users could play the game and meet the team of creators at the Denius-Sams Gaming Academy lab on the fourth floor of the CMA building. The multiplayer-only game is available for download on Windows platform here.

“Roots of Sarkos” is a networked, asymmetric platformer with an emphasis on cooperation between two players. One player guides the game, and the other takes action while both players work together in what the students equate to a digital equivalent of a trust-fall. In the end, both players must rely on each other’s strengths and abilities to escape the mysterious floating islands that are known as Sarkos. 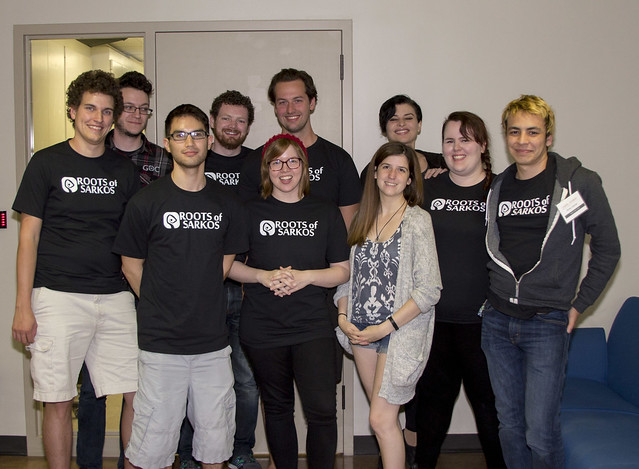 The Denius-Sams Gaming Academy in the Moody College of Communication is an intensive, nine-month game development program focusing on leadership and production. Students in the academy learn the unique challenges that face video game studios by working to create their own game, with each student serving as creative director, producer or discipline lead during the production process.

“The ‘Roots of Sarkos’ game is the result of many hours of hard work on the part of the DSGA’s 20 participants,” said Warren Spector, program director. “The team members committed themselves to creating a game that would stand out as unique not only among games developed for academic reasons but among games developed for commercial release by professional developers—and they succeeded!”

“The core of the game is ‘asymmetric gameplay’ – where two players with different information and in-game abilities must cooperate to achieve a common goal. Very few games have attempted this, and the success of ‘Roots of Sarkos’ speaks volumes about the dedication and talent of the program participants,” said Spector.

Spector (M.A., Radio-Television-Film ’80) is a 30-year veteran of the video game industry and has worked on more than 20 production teams as designer, director and producer. He is best known for his work on the “Ultima,” “System Shock,” “Deus Ex” and “Disney Epic Mickey” game series.

“The DSGA is a program like no other,” said Sandro Kvlividze, a game designer from Georgia and one of six international participants in this year’s program. “It gave me real, applicable leadership skills which would otherwise take years to develop. And that gives me an unfair advantage over other developers. Working on the ‘Roots of Sarkos’ game gave me the canvas necessary to apply and refine those skills.”

The Denius-Sams Gaming Academy was made possible by contributions from the Cain Foundation and Paul and Susan Sams.