In Honor of Outstanding Teaching

Early April 7, a trumpet could be heard belting the brass notes of “The Eyes of Texas” in the halls of the CMA building in the Moody College of Communication.

The occasion was a surprise to Associate Professor Courtney Byrd, who couldn’t hide her emotion as members of The University of Texas at Austin campus community including the Longhorn Band, Cowboys, Blazers, and Orange Jackets walked into the middle of her morning class unexpectedly with her three boys and husband in tow. 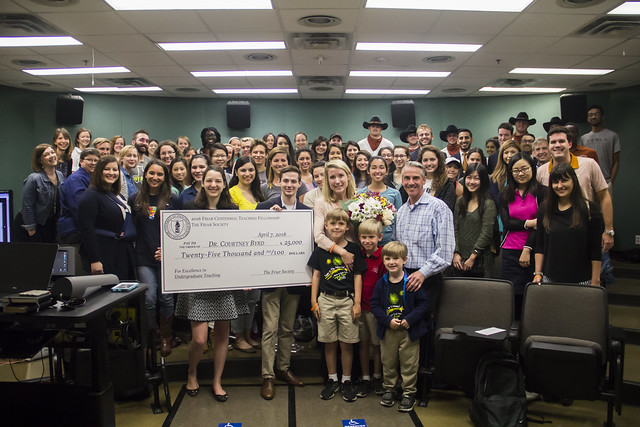 Presented with flowers, balloons, a plaque and check in a room filled with about 65 in attendance, Byrd was honored with the 2016 Friar Centennial Teaching Fellowship, a highly prestigious award reserved for one outstanding undergraduate professor each year.

In receiving the award at an official ceremony April 9, Byrd said today is always an opportunity to make things better tomorrow in anyone's life, including your own.

“People who stutter spend so much time not going into certain situations because they’re afraid of how people will view them because of the way they talk,” said Byrd, who is also director of the Michael and Tami Lang Stuttering Institute in Moody College. “Similarly, what I see with my students is they’re afraid to do research because they’re afraid they might fail. I want them to know that finding your life’s purpose is typically on the other side of fear.”

In addition, four Moody College students were inducted into the Friar Society as part of the ceremonies on April 9, which is the oldest honor society on campus and dedicated to recognizing students who have made lasting and significant contributions to UT Austin. They include Radio-Television-Film graduate student Autumn Caviness, School of Journalism/Plan II senior Jori Epstein, Communication Studies senior Veronica Rivera, and Communication Studies senior Danielle Lauren Smith.

Since 1995, the extremely competitive award has been given to three other Moody College faculty members— Professor John A. Daly, Associate Professor Sharon Jarvis and Professor Charles Ramirez Berg.

View the video of Byrd being surprised in class April 7 at the Alcalde.