As Hurricane Harvey raged along the Texas coast, Houston resident and Moody College of Communication alumna Holly Hartman (B.S. ’93) was struck by reports of individuals from across the region who traveled to Houston to help aid rescue efforts.

Hartman, a journalism teacher and yearbook and newspaper adviser at Memorial High School in Spring Branch ISD, read online about the “Cajun Navy”—a group of thousands of volunteers who rescued flood victims using their bass boats. The Cajun Navy had been using a walkie-talkie-type app called Zello to communicate and coordinate rescue efforts.

“We will never really know how many people were saved specifically through calls made on Zello, but I know it has to be in the hundreds, if not thousands.”

Hartman decided to download the app and began listening to dispatches from the Cajun Navy, including petitions for help fielding and logging rescue requests. 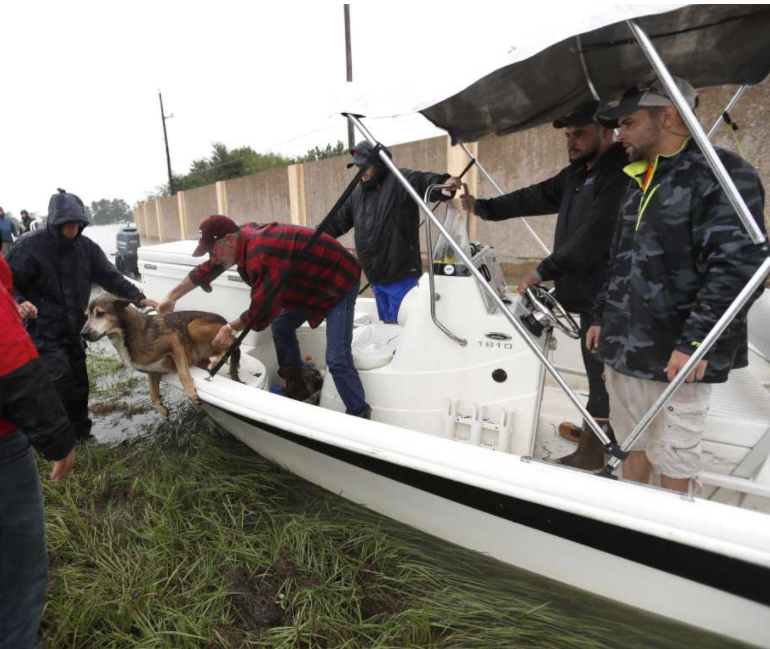 Photo: Karen Warren, Houston Chronicle. Joe Henley tries to get his dog, Bubba, out of the boat of Josh Mtanyos, a Cajun Navy volunteer, just north of 1960, Tuesday, Aug. 29.

Hartman accepted, sat down at her dining room table in Houston and opened her laptop computer. After a two-minute online training session, she was receiving calls from flood victims across the city desperate for help. At 12:30 a.m. on Aug. 30, Hartman began acting as an emergency dispatcher—thus beginning one of the longest and most difficult nights of her life.

Hartman detailed the harrowing experience and the role of social technology in rescue efforts in a column published this week in the Houston Chronicle.

“I truly believe that without the Zello app and the use of Facebook during Harvey—and of course, the first responders and the civilian rescuers who risked their lives to save others—the deaths could have numbered in the thousands, like they did in Katrina,” Hartman said. “We will never really know how many people were saved specifically through calls made on Zello, but I know it has to be in the hundreds, if not thousands.”

“I will tell my students that all of them are capable of doing something similar if and when that kind of opportunity presents itself,” she said. “The real heroes are the men and women in the boats and the actual dispatchers who were on the app for days on end talking directly to the boats.”