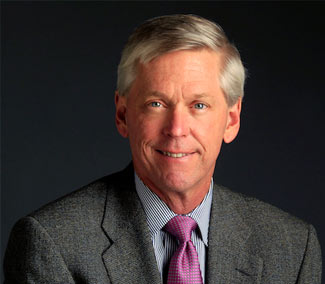 Any investigative journalist knows the Freedom of Information Act (FOIA) is an essential key to unlocking data and documents that can separate fact from fiction in their stories. Based on the belief that individuals should know what their government is doing, the FOIA was signed into law on July 4, 1966 and was expanded in 1974 following the Watergate scandal.

One group supporting the law includes the Freedom of Information Foundation of Texas (FOIFT), which strives to ensure that government business is conducted in public and protects the liberties of free speech and press guaranteed by the First Amendment.

As part of their mission, the foundation honors those who uphold its highest standards with the James Madison Award. This year’s honor goes to Dallas Morning News Publisher and A. H. Belo Corporation CEO Jim Moroney, an ardent benfactor of the Moody College of Communication.

The award will be presented Sept. 14 at the John Henry Faulk Awards Luncheon during the foundation’s state conference in Austin.

“The health of our democracy is contingent on protecting the freedom of the press,” said Jay Bernhardt, dean of Moody College. “As a stalwart supporter of this fundamental right, Jim embodies the qualities we seek to cultivate in our students. He is an excellent role model and mentor to future journalists and media executives and teaches them how to ensure that public institutions are held accountable for their actions.”

Paul Watler, past president of the FOIFT and chair of the foundation’s James Madison Award committee, said that Moroney practices the idea that newspapers in America are the most important check against governmental misconduct and overreach.

“Moroney fights to keep newspapers relevant and economically viable despite the challenges of profound technological change and disfavor among high-level elected officials,” said Watler. “Jim has kept the faith, in good times and bad, that newspapers serve the public best by maintaining their independent voice and adhering to the values of the First Amendment.”

Moroney is the chairman, president and CEO of A. H. Belo Corporation, a position he has held since September 2013. He’s also served as publisher and CEO of The Dallas Morning News since June 2001.

“Frankly, with people around the world, who for years and decades have been living under regimes and governments that deny them basic liberties and that suppress organized opposition by preventing a free flow of information, the need to defend freedom of information has been necessary in the past, is necessary today, and sadly, but importantly, will be necessary in the future,” said Moroney.

In 1993, Moroney was named president and general manager of KOTV in Tulsa and in 1997 was promoted to president of Television Group, assuming responsibility for the operations of all of Belo’s television stations in 15 markets across the United States. In 1998, he was named executive vice president of Belo, overseeing finance, treasury and investor relations. Moroney was president of Belo Interactive, Inc. from its formation in May 1999 until June 2001.

He presently serves on the boards of The Associated Press, the News Media Alliance, The Dallas Foundation, the State Fair of Texas, the advisory council of Moody College, and the Bishop's Finance Council of the Diocese of Dallas.

Since 1987, the FOI Foundation’s James Madison Award has honored journalists, attorneys, elected officials and vigilant citizens who protect the public’s right to know.

In addition to Moroney, former Assistant Director of the School of Journalism Wanda “Fluffy” Cash won the award in 2016 for her decades of advocacy for journalists’ access to public information.