'It is not just a job or a project, it’s about caring about people.' 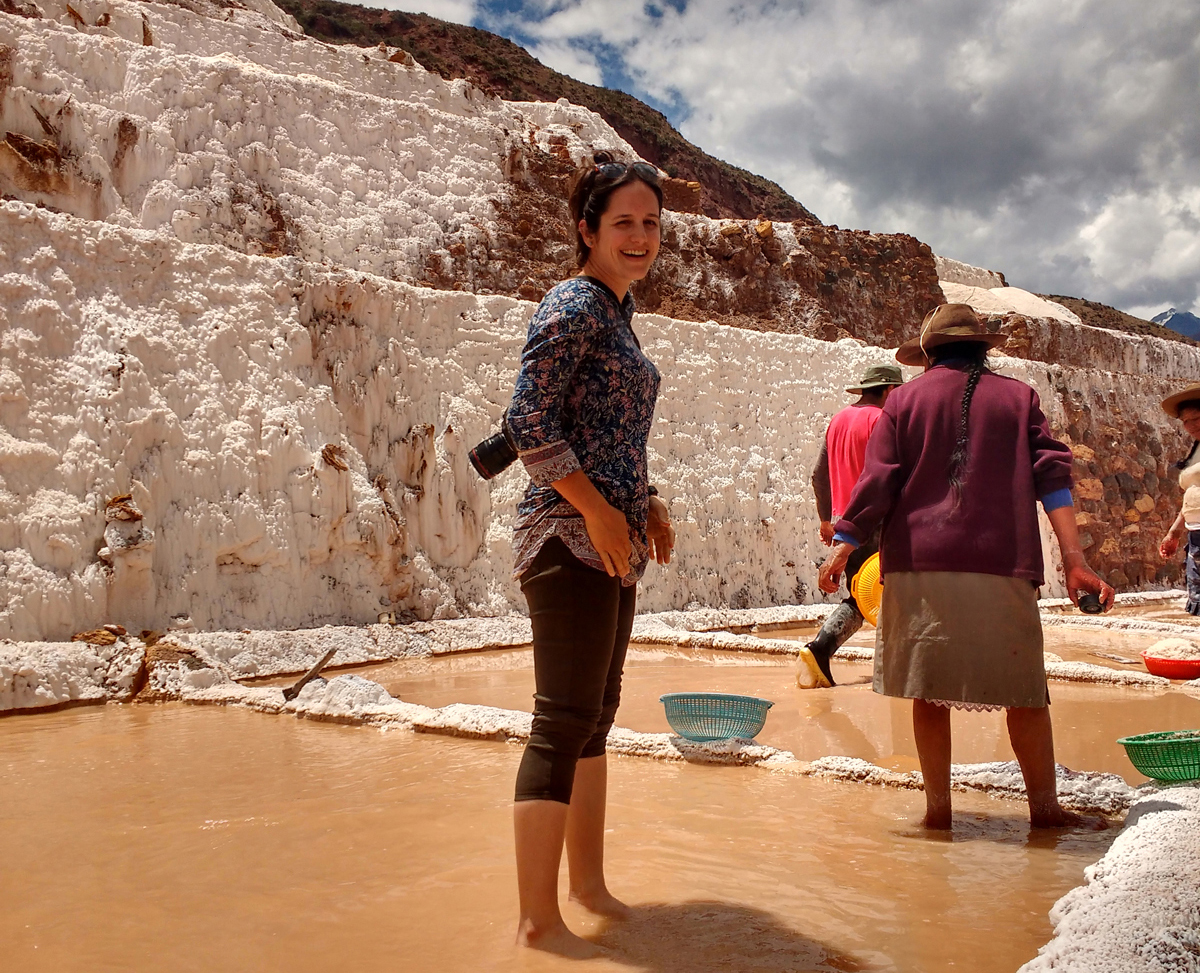 Photojournalist Danielle Villasana graduated from Moody College with a degree in journalism in 2013. In her time at UT, she learned many skills that have served her in her career today: curiosity, thoughtfulness, good ethics and a yearning to make a difference.

For the past 10 years, Villasana’s work has taken her throughout Latin America, as she’s told the stories of people whose stories don’t often get told, following trans women as they flee violence in their home countries for asylum in America. Her goal is to educate people about the dangers these women face, with the hope that her photographs will raise awareness about the issue.

Villasana’s latest series, “Abre Camino,” centers in San Pedro Sula, Honduras, documenting trans women who are relegated to sex work, endure sexual assault and face hardships as they prepare to migrate north. This year, she received an Alexia grant to finish the project and show what life is like for the women once they make it to America and the instability, discrimination and barriers they face as they try to make a new home for themselves.

While taking some down time in Texas this summer, Villasana chatted with us about her work — the challenges, the rewards, what she learned at UT and what advice she has for student journalists. Read what she had to say.

This article has been edited for clarity and length.

When did you decide to explore this topic and why?

It actually started over 10 years ago when I was a student at UT. I had a class with Donna DeCesare and was documenting LGBTQIA+ families in Texas. At the time, the south was home to the largest number of LGBTQ families, but of course, the legislation in the south is not as welcoming as other cities or states and certainly not the culture. I found that really interesting. For my school project, I photographed LGBTQ families in Austin and Houston. Shortly thereafter, I went to Argentina on a Helen M. Powell fellowship through UT. Argentina had just passed the most progressive set of gender identity laws. I wanted to look at how those laws were affecting trans folks. The following year, during my last semester in UT, I was doing a study abroad in Peru and explored what it was like for trans women there. I completed that after about three years and wanted to look at how these same factors are pushing women to flee their homes in Central America.

The statistics in Latin America for trans women are just appalling. It leads the world in trans homicides at nearly 80%, and most trans women don’t live past 35 years old. Trans women throughout the world are relegated to sex work because of transphobia and lack of access to jobs and education. From that come lots of issues, violence from police and partners, disease. It creates a snowball effect for women.

How did you identify and meet the trans women for this series? How do you build trust with them?

I get this question a lot. Most of the women I met in my work, I just literally would walk up to them on the street, briefly introduce myself, not take up too much of their time, give my business card and number, tell them who I am and what I’m doing, ask them if they are interested and want to meet up. In both Lima and Honduras, local journalists helped identify many of the areas where transgender women live and work. Reaching out to NGOs is another way to connect with women.

As with any relationship, you have to invest time. That is first and foremost, spending a lot of time with people. Also, being open myself, not holding back about who I am, being fully transparent about my intentions. Because I follow women for a long time, I try to continually have conversations around consent. It is not just a job or a project, it’s about caring about people.

Your work takes you to many dangerous places. How do you confront that and stay safe?

There definitely were scary situations. I’ve been picked up by cops when they are rounding up people on the street. I had a very hairy interaction with guys who got out of the truck with guns. In all those situations, I was overtired and not thinking straight and made mistakes. What I learned was, when I am out late photographing women on the street until the early morning, hire a driver so if something does happen I can get in the car and drive away. Also, being aware of your surroundings, not flashing the camera all the time, take it out to take pictures then put it back in my bag. I check in with people all the time, share my live location, all the safety mechanisms anyone would do in a dangerous situation.

What is the most difficult thing about telling these stories? Is there one in particular that felt especially hard for you?

I think the hardest thing is you get really close to people, and a lot of bad things happen to people you care about. For example, a woman I was following in Lima for a few years eventually passed away from AIDS and TB. It was something I knew happened to the community, but as with close friends or loved ones, you think it’ll never happen to you. She passed away, and that was very jarring and painful. When you spend so much time with someone and covering an issue you care about an are invested in, at the end of the day these are real people with real lives. These women want a better life for themselves. They want to be loved and accepted, and that’s not what they get from society. It’s hard to be a witness to that. But it further motivates me about why it’s important to raise awareness and tell their stories. I am so grateful to all the women who have shared their lives with me. It takes courage, especially when it makes them more susceptible to exposure.

What do you hope your work accomplishes?

I think a lot of hate comes from a lack of education or misunderstanding. With this work, my ultimate goal is to raise awareness about this issue but also to educate people. For example, with my series “A Light Inside,” I published a photo book to distribute to universities and health care centers in Lima. I would have liked to reach thousands of universities and health care centers but even one health care center where someone thanks you for teaching them something about the transgender community they didn’t know is rewarding. Even with people who are so open and willing to learn, oftentimes they don’t know about an issue until they are exposed to it. There was a doctor in one of the hospitals where a couple of the women I was following received treatment, and he was great. He listened a lot. He would tell me, “I had no idea that this issue was happening right here in my backyard.” He was really proactive in trying to address it and opened the first hospital consultation area for trans women, so when they go to this hospital there’s a separate area where they don’t have to be around other patients who can be discriminatory or offensive. The staff are educated about how to use pronouns correctly. It eliminates a lot of apprehension and distrust of the health care sector.

Once I finish my current project, I would love to create a small, easily portable resource guide with information, resources and testimonials that would act as a source of information for trans women as they migrate to the U.S. Because they are fleeing, they often leave unprepared and aren’t informed of the resources for them along the road. It’s incredibly overwhelming to navigate the process. This would act as a guide that they can carry with them.

What is one thing you wish people knew or could understand about the women in your series?

I wish that people would accept people’s gender identity. Not only that, but I wish that people would accept everyone and not limit people’s employment or educational opportunities based on who they are. I wish that people would understand that a lot of the women that are fleeing Central America, their lives are in danger. These aren’t decisions they made overnight. It’s something they’ve considered over and over again. Very few people want to leave what they know, even if it is for something like a better life in the U.S. And most of the time, when women reach the U.S., they still face a lot of challenges and instability. They aren’t able to secure employment and navigating the migration process is really complicated. It’s not a decision people make easily.

What is something you learned at UT that you have taken with you during your career? And what advice do you have for UT photojournalists?

I think one thing important lesson I learned at UT was about ethics and how important they are — far more important than getting the picture. Our job is all about bringing truth to people and building relationships based on trust, so ethics have to guide you first and foremost. You are going to photograph thousands and thousands of moments in your life. You can always learn how to be a better photographer. That’s the easy part. But building ethical relationships and being an ethical journalist requires a strong foundation, learning and unlearning, checking in with yourself and creating work that is ethical and doesn’t perpetuate stereotypes and adds something new and different to the narrative.

I would recommend student think about ethics, and the power they hold as visual storytellers. From that, everything is going to flow naturally and easily. Then, you know you are on a that is paved with much more than good intentions.

Stepping Up to the Plate
‘There is Truth, and It’s Out There to Find'