The most recent release by filmmaker Steve Mims, lecturer in the Department of Radio-Television-Film, explores a controversial investigation, trial, conviction and appeals process that allegedly led to the death of an innocent man. The film is a documentary named "Incendiary: The Willingham Case," which received the 2011 Innocence Network Journalism Award at the annual Innocence Network Conference in Kansas City, Mo.

The Innocence Network is an affiliation of organizations dedicated to providing pro-bono legal and investigative services to individuals seeking to prove innocence of crimes for which they have been convicted and working to redress the causes of wrongful convictions. 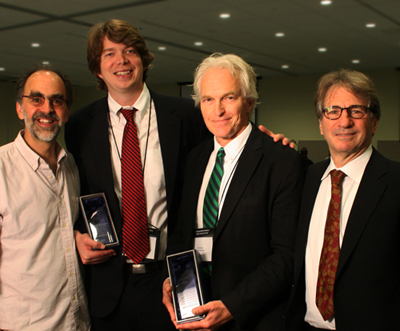 The journalism award annually honors the "investigative reporter or reporters whose work best brings to life the process of identifying and exonerating wrongfully convicted individuals." An independent panel of investigative journalists is assembled each year to review the nominees, and determine who among them best embodies excellence in investigative reporting.

"Co-director Joe Bailey Jr. and I never set out to make an anti-death penalty film, since we felt that's a polarizing issue," said Mims. "Instead, we focused on science, law and politics – elements of the story we could back up with facts. In the end, the facts speak for themselves, and Willingham clearly suffered from shoddy science and poor treatment in the legal system. Then, after his execution, that act became a political issue."

"Incendiary" documents the story of Cameron Todd Willingham, whose three daughters died in a Corsicana, Texas house fire. Convicted largely on what is now considered antiquated methods of arson investigation, Willingham was sentenced to death for the murder of his children. Despite criticism of the prosecution's scientific evidence, he was executed in 2004. Subsequent investigations of the case landed the Willingham issue in a national spotlight made brighter and more intense by the presidential campaign of Texas Gov. Rick Perry. The film focuses on science available to the criminal justice system and how its interpretation may be determined by jurisdiction, politics and personalities.

Mims said the idea for the film was born from a debate with co-director Joe Bailey Jr., a student at the time, about clemency in Texas and whether the legal system provided adequate reviews of death penalty cases. Mims suggested that Bailey read David Grann's extensive article in the New Yorker on the Willingham saga, and the resulting conversation led the pair to begin interviewing those involved. Two years later, after canvassing the state for interviews from Harlingen to Corsicana, the film reached its final cut.

"The big issue for us was that it happened in the past tense, but what made it contemporary was the arson evidence," said Mims.

Mims said that the procedural and scientific analyses of arson investigation since the events took place in 1991 have changed greatly, and that the Willingham investigation, which was initiated by the Innocence Project's 2006 complaint with the Texas Forensic Science Commission and subsequently covered in the film, has led fire science professionals to re-examine several other cases of individuals convicted of past arson crimes.

"Incendiary" premiered in March at the 2011 South by Southwest Film Festival and won the 2011 Louis Black Award. The film had a limited theatrical release in the fall of 2011 in Austin, Dallas, Iowa City, New York, Washington, D.C. and Los Angeles.

For more information and to rent or purchase the film, visit www.incendiarymovie.com.

Steve Mims, a lecturer in the Department of Radio-Television-Film, started filming movies when he was only 12. By the end of his high school career, Mims had already shot everything from animations and westerns to scary movies and swashbuckling adventures.

A graduate of the UT Master of Fine Arts program in film and media production in 1987, Mims has taught at UT since 1989. His award-winning short films have screened widely in festivals and on television.  The New York Times' Vincent Canby referred to his film "Aunt Hallie" as "a treasure...which belongs on everybody's list of the top ten funniest films ever made."

Mims' 1999 feature film "The Perfect Specimen" premiered at the South by Southwest (SXSW) Film Festival and on Showtime. His short film "Southfork Pilgrims," a profile of rabid fans of the television series "Dallas," was commissioned as an exhibit at the Bob Bullock Texas State History Museum in 2008. Mims' music videos include work for Webb Wilder, Stephen Bruton, Los Straitjackets, the Austin Lounge Lizards, and Billy Joe Shaver and have aired on More Music, TNN, CMT, GAC, CMT Europe, M2 and MTV.

Anne Hornaday of The Washington Post wrote, "Nonfiction filmmaking at its most classic. Crime, punishment, morality and hardball politics make for an explosive narrative mix all their own."

"Alarming viewing for anyone who cares about the American justice system," wrote Sheri Linden of the Los Angeles Times.

Art Levine of The Huffington Post called the film, "A gripping, visually stunning indictment of a miscarriage of justice as great as that chronicled in Errol Morris's groundbreaking 'The Thin Blue Line.'"