In a recent story about Donald Trump’s lead in the polls, NBC Nightly News reporter Katy Tur referred to Trump’s “emotional appeals to angry Republicans.” Of all the analysis and speculation by political pundits, the reporter’s comment proved to be one of the most insightful to Renita Coleman, associate professor in the School of Journalism.

Coleman claims political analysts and voters underestimate the impact of people’s feelings on voting decisions, and that voters use emotions more than logical reasoning when making judgments about whom to elect as leaders. 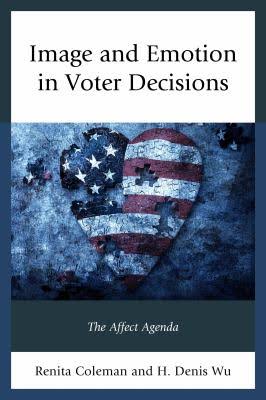 This is the topic of her recent book, “Image and Emotion in Voter Decisions: The Affect Agenda,” co-authored by H. Denis Wu of Boston University. Together, they studied the last three U.S. presidential elections, finding that emotions were at least as important—and sometimes more important—than voter assessment of a candidate’s character.

The pair also found that the way a candidate makes voters feel—specifically, angry, afraid, hopeful or proud—is driven by the way media portray a candidate. We sat down with Coleman to learn more about her research and the current presidential primaries.

What parallels do you see between the findings in your book and the current Republican and Democratic primaries?There are many. Besides the obvious role of emotion in this campaign, there is also the connection between Hillary Clinton’s continuing troubles with her emails and the public’s trust. Being trustworthy is essential to our criteria for electing someone to carry out our wishes as a nation. This is not a superficial thing to base your vote on.  It’s important that our elected officials do their best to honestly and with integrity represent the will of the people.

How is Trump making emotional appeals to stay in the lead in the Republican primaries?
Unlike most of the time when a candidate makes voters feel anger, Trump is making voters feel anger not at him, but at others. It’s as if he senses that when voters’ anger subsides, their rational decision-making will kick in, so it’s necessary to keep their emotions running high by throwing out another bombshell. For example, his remark about Hillary Clinton starting the birther movement coming on the heels of Ben Carson catching up to him in the polls.

How is the media portraying Trump and is this hurting or helping him?
The only bad coverage is no coverage, in this case. I think covering his statements, no matter how outrageous, on legitimate issues like immigration is necessary. But antics like giving out another candidate’s cell phone number or having someone pull his hair to prove it’s real is just political theater. It keeps him in the news more than other candidates and crowds out real issues.

How would you explain Bernie Sanders’ rise in the polls on leading Democratic candidate Hillary Clinton in the polls?
I think Hillary Clinton’s problem stems from another topic, related to emotion that we studied in this book, which is character traits. Specifically in this case, people feel they can’t trust Clinton, and that’s she’s not honest. The email server issue is one big reason. Our research was on both the emotions of voters and their assessments of a candidate’s character traits, including honesty. We found that character traits are more important to voters than a candidate’s stance on issues. And that isn’t necessarily a bad thing. No one can predict what issues will come up during a president’s tenure, so it’s impossible to get their positions on all potential issues in advance. But choosing a president based on character isn’t a bad way to pick a leader. Honesty and intelligence should bode well for carrying out the charge of representing the people. We want leaders who care about others and are moral. I’m less concerned about voters using character traits to elect a leader than I am about them relying solely on their emotional reactions.

How will current media portrayals of Sanders and Clinton help or hurt them?
Here I think it’s important to point out that the media alone are not solely responsible for how the candidates are portrayed. One of the big features of the research in this book is that we looked at not just what journalists wrote about the candidates, but how they were portrayed in pictures and video. Visuals are not crafted by journalists the way stories are. Video clips and photos of candidates are often the result of highly staged events, with impressions managed, candidates coiffed and clothes, and nonverbal behavior coached. Journalists can’t control how the candidates present themselves, only which images they select to use. And no one has found any systematic bias in terms of news media consistently selecting good or bad video and photos of a particular candidate. In fact, we found that journalists were more balanced in their written coverage than they were in the visuals, but that the visuals for all candidates were far more positive than negative. Also, visuals are far more effective at sending information about character traits and emotions than words are. So, the expressions and gestures the candidates themselves make are very revealing.

Do you have any predictions for what to expect next in the primaries?
No. The research we do isn’t aimed at being able to predict elections. It’s aimed at understanding the kinds of things that voters use when making decisions, and how media coverage affects that.  A couple of interesting things we found are that when it comes to the media’s influence on people’s emotions and attitudes about the candidates character traits, having more education actually had a protective effect; that is, the more educated were less susceptible to the media’s influence. It also seems that being highly partisan helps inoculate people against the media’s influence. We found that strong Republicans were not swayed by the media’s portrayal of Democratic candidates, and strong Democrats were not influenced by media portrayals of Republican in all four years we studied. However, Independents in 2008 and 2012 were swayed by media coverage for both candidates.

The next major event will be the first Democratic debate of the season. The debate is scheduled Tuesday, Oct. 13 on CNN at 7:30 p.m. central standard time.