Having the heart to listen

With the curiosity of a philosophy major, and the compassion of an elementary school teacher, Elizabeth Carrow-Woolfolk also had the eyes to see into the heart of the matter.

As a young speech pathologist in San Antonio at Our Lady of the Lake University, Woolfolk started working with a 3-year-old who needed help to prepare for preschool. 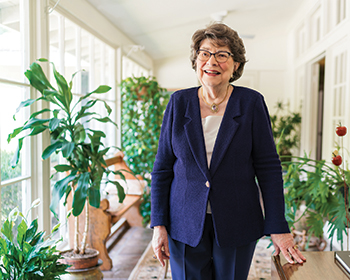 “He would imitate only, just repeated what he heard. He couldn’t speak meaningful language,” Woolfolk said. “Most people would say he would never understand a word, and that he might be autistic. But I saw a spark that made me think otherwise.”

During treatment sessions, seemingly simple things became significant points. He learned picture by picture, with repetition, and gradually he commanded more words and word combinations. One day Woolfolk told her student goodbye, and he responded by saying, “Goodbye, teacher.”

“His response, ‘Goodbye teacher,’ indicated that he had broken a barrier. He knew that words have meaning and could be used to communicate,” Woolfolk said.

This child, who later attended junior college, spurred Woolfolk to try to understand the use of language better.

For more than 50 years, Woolfolk worked with children and adults to help them overcome barriers related to language, reading and learning disorders. She forged a trail as a researcher, university professor and administrator. After earning her master’s in educational psychology at The University of Texas, she became one of the few female Ph.D. students studying speech pathology at Northwestern University.

Her service to The University of Texas continued by being a department chairperson and a board member of the college. Today, Woolfolk’s generosity will enable the Department of Communication Sciences & Disorders at the Moody College of Communication to establish a comprehensive database dedicated to answering and understanding language disorders across a lifespan. The work will ultimately improve diagnostic accuracy and treatment for children and adults.

“This is poised to make a lasting contribution to the field of communication sciences and disorders,” said Rajinder Koul, the department chair.  “(Woolfolk’s) life and legacy is something we want to nurture at UT Austin.”

Woolfolk focused her treatment on a lifelong dedication to understand what her patients could comprehend and say. She developed a system of tests in order to get a handle on what the children understood and expressed. Her primary contribution to the profession of speech pathology has been the development of standardized measuring instruments that describe the comprehension and expression of language. These tests are based on a theory that considers a multi-facet description of language as the basis for language assessment.

“Language has so many aspects,” Woolfolk said. “We’re beginning to understand that none of these problems occur in isolation. One of the most exciting things that we’re doing at The University of Texas is try to understand how all the aspects are related.”

Woolfolk’s vision is to develop a database that stores information, sees patterns and develops profiles for groups with similar combinations of language, cognitive and neurological impairment.

“The essence of life is communication. Just imagine not being able to speak in a way you can be understood,” Woolfolk said. “With a language problem, individuals often look normal, but they are difficult to understand or express themselves – and children are made fun of, they get bullied. It’s a subtle thing.

“The wonderful thing is we can change it. We can take a child who has serious problems in communication and teach that child to be ready for school.”