A Fresh Take on The Caped Crusader 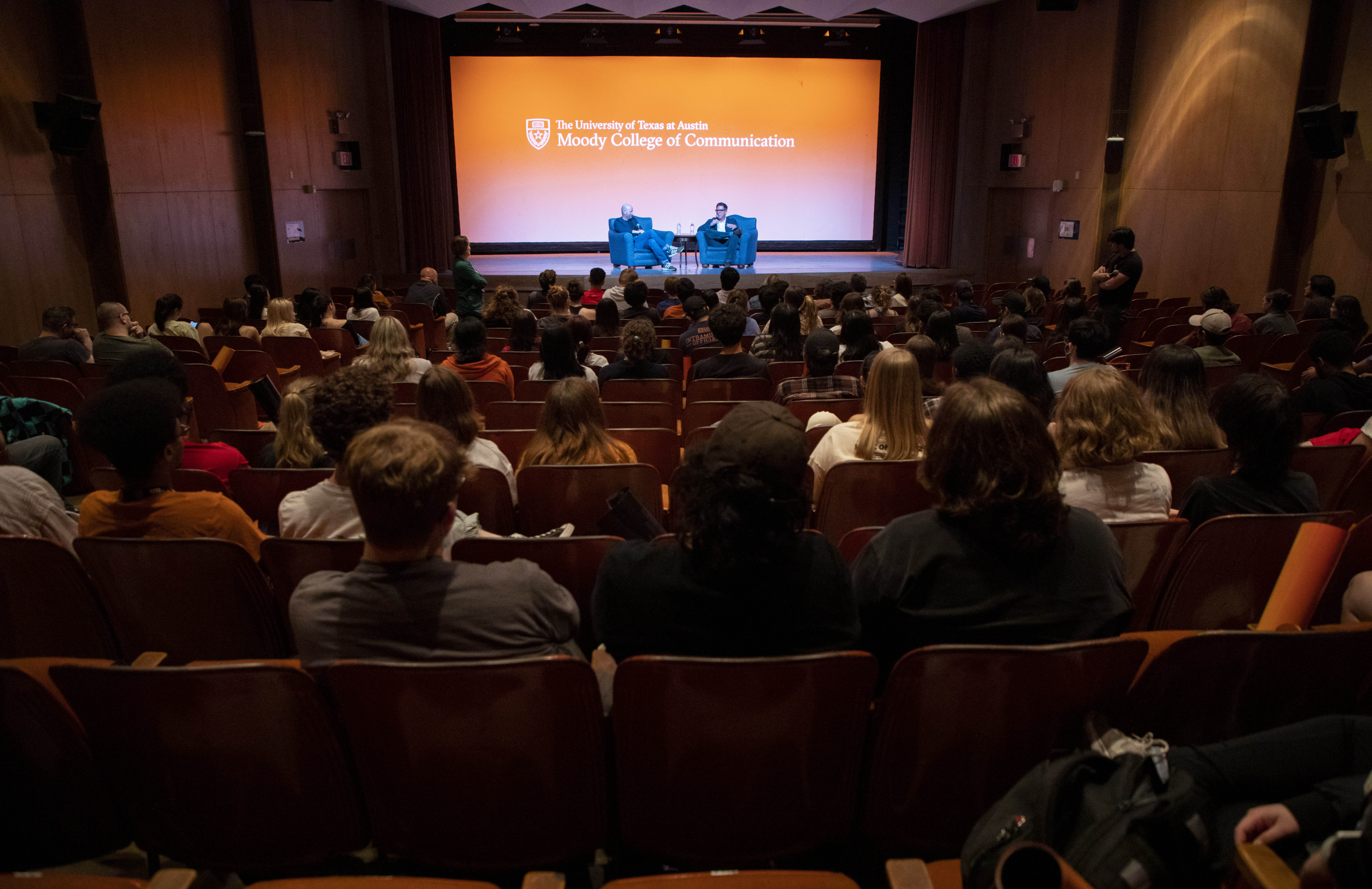 The Batman franchise has been around for 80 years, with dozens of movies. So how do you make something so classic and revered seem new? The idea seemed daunting to executive producer Dylan Clark and director Matt Reeves when they set out to create “The Batman” in 2019 just before the pandemic. They were facing 80 years of allegiances and the pressure to create something that would captivate audiences. And nothing seems to do that more than a serial killer movie, Clark said. For those who haven’t seen "The Batman" yet, picture the broody Robert Pattinson working alongside cops to try to solve a series of murders of high-profile Gotham officials and coming eye-to-eye against the Riddler. Add in a budding romance with Zoë Kravitz as Catwoman and a soundtrack that includes Kurt Cobain’s “Something in the Way” (Reeves used the song as inspiration when he wrote the screenplay and paid Warner Bros. a ton of money to use it), and it’s a can’t miss.

Clark, whose son also happens to be a Moody College junior, gave a special screening of the movie this month and stuck around after for a Q&A. Here’s what he had to say (edited for length). 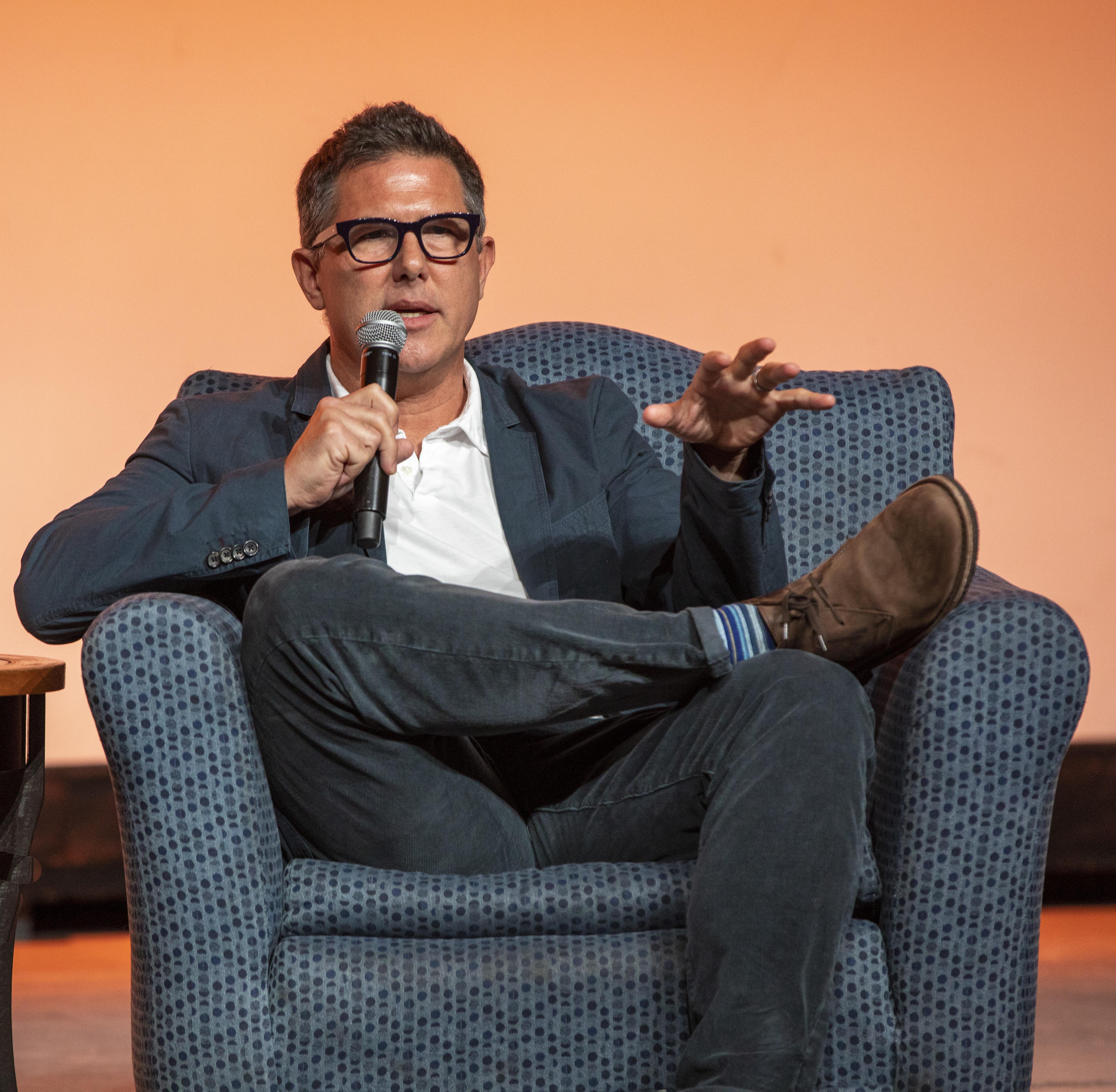 Before we get to talking about The Batman, I wanted to have you recount for students your specific (career) trajectory.

Dylan: I am an only child. My young parents had no idea that by giving a television set and access to the Z Channel that I would just obsessively consume movies. And very diverse movies. And that led to a real love of that form. It really wasn’t until college, later, that I really got into story. I was a political history major. I think I wanted to do something to try to change the world like a lot of young people did, and I didn’t see film as that path to doing it. I went to D.C. to work for Senator Feinstein for about three years, and then I had that moment that many of you will have around your mid 20s when you say, ‘I like what I studied, I like that I got this job.’ But I did a gut check and realized I wanted to do something a little bit more creative. And here I am. It’s been incredible. I was a studio executive. I wrote a terrible screenplay with some friends. I worked for producers. I’ve worked for a television writer. And it wasn’t until I was around 40 years old that I decided I wanted to go out and be a producer. That was the best decision I ever made because navigating the needs of a studio and trying to figure out how to make money out of the product, that was a great learning experience, and it gave me an ability to meet a lot of different types of filmmakers. I got to oversee all these great movies and really learn from some amazing people. But when you’re out there on your own and having to create it from scratch, that is an entirely different beast. And you guys know that you film students. It is so hard. It’s a great thing, though, to be able to dig down deep and figure out what kind of stories you want to tell. I’m glad I studied history. I’m glad I worked for a U.S. Senator, and then I’m also glad that I had this opportunity in my life to step back and go, “I can change it.” And I think you guys live in a time where you can do that kind of thing.

Let’s get to the film itself. I wanted to approach the film from two separate aspects: the noir but also the epic scale of the film like the Batman.

Dylan: When you take on Batman, you are taking on 80 years of character that people have obsessed about and have seen other great film makers make and other actors portray as the Batman and yet you get asked to do this, you have to do it and you’re excited to do it and then you are terrified to do it because you have to, first, how do you do this differently? How do you make it feel fresh and get a new audience excited for this? You really have to dig deep to find that new angle on it. What’s great about the underlying material is it is noir. Batman, imperfect, alone, fueled by vengeance and having a lot to learn about himself. And that paired with the world’s greatest detective angle gave us the opportunity to do something back to the noir roots but also something really emotional. The theatrical moviegoing experience — sitting in this theater, in horribly old seats, your backs are killing — is a good experience. There is nothing that compares to this big screen and an audience with an epic movie. And for us, we spent a lot of time trying to dial in the character, everything is about the emotional character journey. One of the things we wanted to be able to convey was a Gotham City that felt consistent when you see other Batman movies. We wanted to make one cohesive looking thing that made it feel epic and real. And then of course Greig Fraser, who just won an Academy Award for “Dune,” also an epic movie, he had a very specific way he wanted to shoot this movie, which is on Alexis 65 widescreen, give it the cinema that we felt like it deserved. 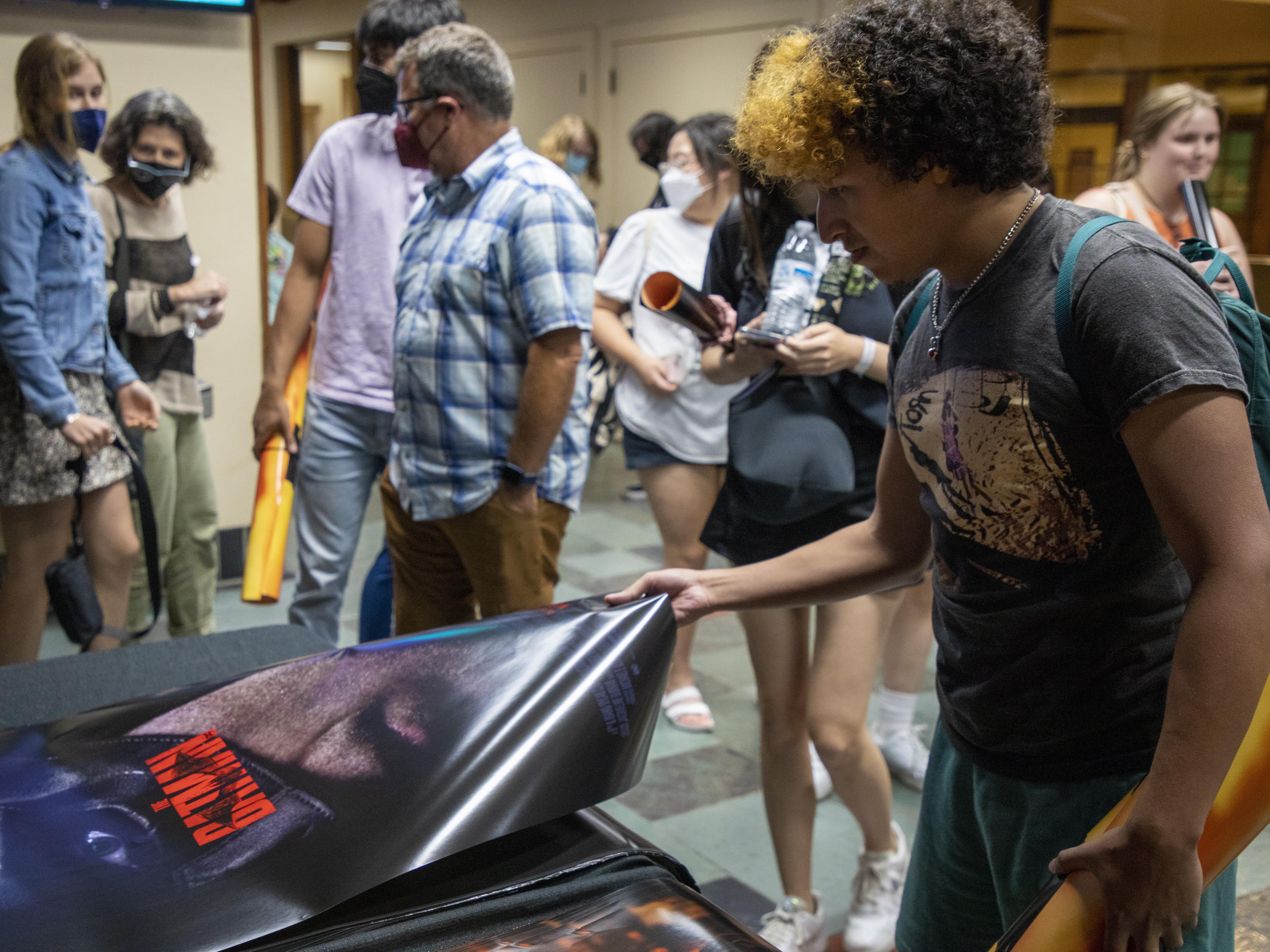 During the actual production process, as well as the post-production process of the film, what was the extent of your involvement? Did you leave it mostly up to Matt Reeves and his team? Or what sort of influence did you have in the process of making the movie?

Dylan: There are a lot of different ways you can do it as a producer. I like the creative aspects of it so typically when I get involved in a project, I’m there from the beginning stages of brainstorming the story to the last days of the release and marketing. So, I do everything with Matt. He has the harder part, which is he has to sit in a room by himself and come up with brilliant words and writes them down, and he gives them to me, and I go, “What is this? This doesn’t make any sense.” I am the worst editor of all time, but we have a nice dynamic, at least I think so.

Every time I watch a movie, especially this short, I always wonder how much actual footage did you guys have? What was the process of getting it down to three hours?

Dylan: It’s 2:56. (laughter). We screened a movie that was longer than three hours. We screened a movie that was shorter. And we arrived at this. Everything was about, to us, really earning the emotional story for this character. And at some point, as you see, the detective story is going, and it’s evolved, but then it becomes, wait a minute, is this guy (the Riddler) leading me (Batman) to the end of this arc? Does he know things about me that I don’t? Is he going to tell me things about my family’s legacy? Have I been living a lie? Who am I? Is vengeance the right way? Grapple, grapple, grapple. Emotional, emotional, emotional. It's a long journey.

Movies of this caliber receive so much attention for such a long time before they come out. I, myself, was so excited for The Batman to come out. I am kind of curious, from the perspective of someone who is working on a film like this, how hard is it to contain everything, to make sure what you all want be a surprise and part of the viewing experience?

Dylan: There’s a playbook that studios do. That’s three trailers, and you know what they are, and the audience can kind of see that. We had the luxury of shooting for 35 days before we shot down, and that gave us an ability to see what we had and whether it was working or not. It was a great silver lining. We thought, “This is actually really good.” When you are making a movie, if anybody calls you from the set of their movie and says their movie is good, they’re lying to you. Because each day you’re looking at this, and you’re like, ‘Oh my God, we are dead. This is our last movie. This thing sucks. We’re gonna die.’ Every movie I ever make I feel that way. That’s the truth. But after 35 days looking at it, I thought, “Wait a minute, we’re actually doing an OK job.” This summer, there was this thing called Fandom that Warner Bros. was creating that was sort of was a competitor of Comicon. We thought, maybe we can do a teaser. And then we realized we had enough to do a trailer. We said, we’re going to put out a trailer. That first trailer was the flag plant and then it was, how do we build an audience? (Batman) is actually an old man’s movie. How do we get young guys interested? And how do we get women interested? Batman doesn’t typically appeal to women. Zoë was a big help. 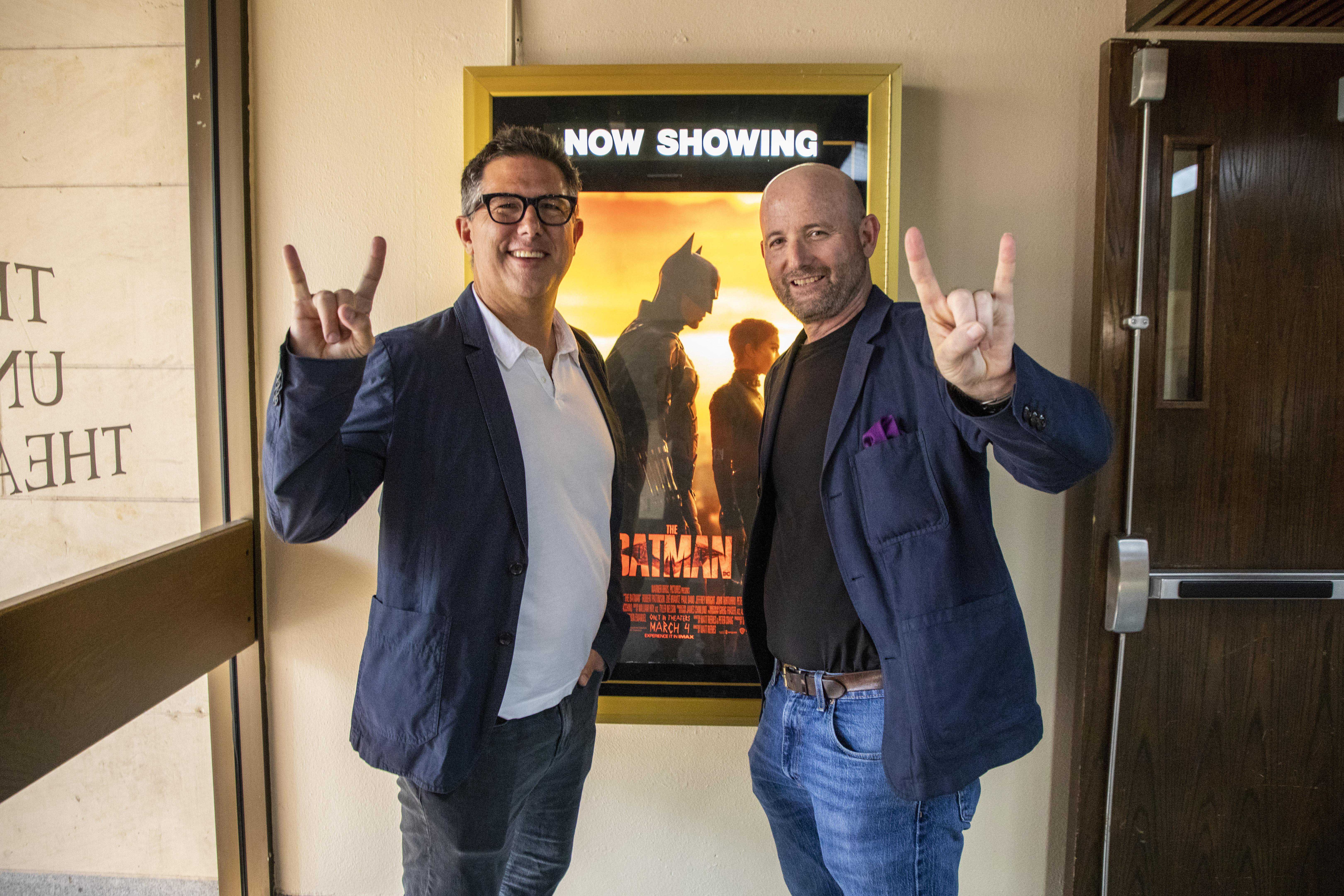 I know this movie uses the superhero movie more as a backdrop and is more of a detective story. How did that lead into your new target audience and get people to be interested in something new, while also being a movie that would essentially sell itself?

Dylan: Noirs don’t make any money. But it’s a noir. That’s a curse. The truth is noir is a great tradition of characters and you can use this neo noir backdrop and push it further with the comic stuff. So, (Batman) is a superhero of some kind, clearly. But he’s a human. He doesn’t have superhuman strength. Once you figure out this story is a story of a detective trying to figure out who’s killing these elected officials, it’s this push pull between really making the journey emotional and that story work. It’s not a ton of action in this movie, but you want to build entertaining moments. And one of the things we just felt certain was an audience likes a good serial killer murder mystery and make it scary. That’s entertaining. And I think we were proven right. It’s a pretty scary movie. We wanted to depict a real world, an authentic world, but we really wanted to grip the audience and keep them on the edge of their seats.

If you had to think about a formula, for lack of a better word, what would be the formula that’s informed your journey thus far to such a great success in production?

Dylan: There’s definitely no formula to any of this. I would say: you want to show up. Once you show up, you want to work really hard. And you want to have a good attitude. If you can do those three things. It’s weird, but a lot of people just don’t show up. And then if they do show up, they don’t really work. And then, if they do that, they are oftentimes grumpy. Don’t do any of that. Show up, work really hard and just be normal and smile. If you can do those three things, people will invite you back.