The video began with Mark explaining that she had to sprint to the University Co-Op at the last minute to purchase a “blue book”—a specialized booklet required for her “World Cinema History”  exam taught by Radio-Television-Film’s Caroline Frick.

“Just about every college student experiences some type of ‘fail’ moment when they take their first exam and that sticks with you for the rest of your life!”

As this was her first exam, Mark was unaware that blue books are required by many instructors.

Then, she learned that finals are often taken in classrooms other than where they meet throughout the semester—and that she was in the wrong classroom and building.

The two-minute video, which Mark immediately posted on Twitter, detailed this and other misadventures she underwent to find and take her first final.

“I think a lot of people have had very similar experiences so it’s easy to relate to the video,” Mark said. “The timing of the video really helped…it came out when a ton of students were about to take finals so it was a relevant topic.”

Mark said the video seems to appeal anyone who's gone through this stressful rite of passage.

“Just about every college student experiences some type of ‘fail’ moment when they take their first exam and that sticks with you for the rest of your life!” Mark said. “I heard from so many adults who had the same experiences with forgetting a blue book—I think it’s so funny that things are still the same.”

Since going viral, Mark’s Twitter followers have increased from 700 to more than 31,000 and had 11 interviews with state and national television outlets, newspapers and other organizations including CNN, Inside Edition and Buzzfeed. 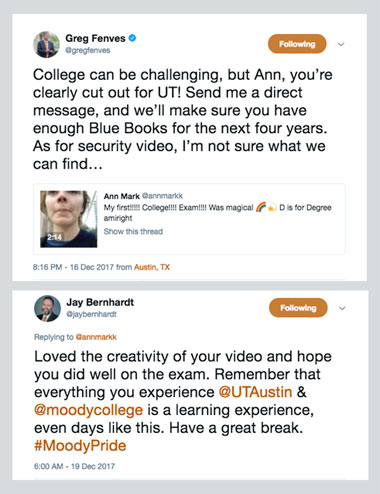 “The candidness of the video really moved it along,” she said. “Since I filmed the video while I was so flustered, with the shot going straight up my nostrils literally as I walked home from the exam. The whole thing came off as more authentic than it would have if I had waited until later.”

Leaders from The University of Texas at Austin have also taken notice, including President Gregory Fenves and Moody College Dean Jay Bernhardt:

While not all responses have been positive, Mark said she's glad she was able to laugh it off.

"I think one thing people liked about the video was that I laughed at myself and the stupid mistakes I made. Everyone needs to do that sometimes. Instead of just getting more stressed about the situation, it’s so much better to laugh it off.”

Mark said the episode has inspired her to start her own YouTube channel with more original comedy content.