Michael Mackert, assistant professor in the Department of Advertising and Public Relations, was teaching an undergraduate Web-based course in health communication this spring when he asked the class to pitch ideas on advertising projects to promote health.

Among all the ideas launched during the vigorous discussion, one particular concept irked and intrigued Mackert the moment a student suggested it: text messaging while driving. 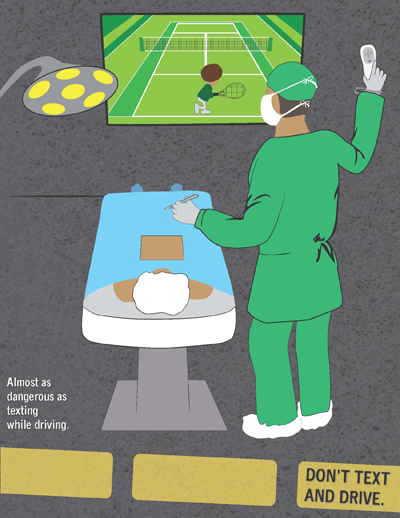 "Our goal for any of these campaigns is the theory and study of a message and why it has the effect it does – and the subject of this one is a pet peeve of mine," said Mackert. "People are 20 times more likely to get into an accident when they text and drive but the challenge is how we get them to realize and care about that."

Mackert recruited three students to begin research on the subject through the undergraduate mentor program within the College of Communication, otherwise known as the student enrichment fund: seniors Chelsea Vermeire, Dat Le and Alex Peltzman. Graduate student Kiley Hoggins acted as research lead with Mackert as the advisor of the project.

"She was a fantastic leader and manager of the project," said Mackert. "Out of all the student enrichment projects I've done, this one was the most hands-off – Kiley and the undergrads did a great job."

The first step of the project was to view how similar campaigns approached the problem.

"They all used an appeal to fear to one degree or another," said Mackert. "We wanted to break that mold – people just assume they're better at texting and driving than the average person."

Originally, the group focused on how to make children a vessel of changing the behavior of drivers but the concept, execution and procurement of children made the idea appear convoluted and difficult to research.

Instead, the group decided to directly focus the message to college students and younger adults, but with the understanding that fear-based advertising of car crashes due to texting were not only clichéd but might not have positive long-term effects on behavior.

The team created new ads from different approaches in order to prepare the campaigns for research and ultimately record which methods of advertising work most effectively. One strategy is for ads to use an appeal to humor by using ridiculous examples of multitasking such as someone riding a mechanical bull while eating hot soup and comparing it to texting while driving.

Another multitasking advertisement developed by the group is of a person playing Nintendo Wii while performing surgery that makes the same texting and driving comparison.

A different strategy is for an ad to subtly point out hypocrisy. Mackert said while most people watch others text and drive and admonish the behavior, those who judge others still might participate in the same poor behavior themselves.

"In a drawing, we put someone in a cab and made the visual of the person in the back seat looking forward at the cab driver who is texting while driving," said Mackert. "The realization might make a person feel less justified to do it themselves next time."

With the preliminary ads developed and in place, the team's next step forward is figuring out best practices on how to test effectiveness and then test and compare results. Assistant Professor Lucy Atkinson, whose primary area of research focuses on the intersection of politics and consumer behavior in young people, will assist in the collection and analysis of data on the project.

"Our goal was to finish making the ads by the end of (spring) semester," said Mackert. "Once we are done with the data collection by the end of the fall semester, we can see how well it performed."

Allison Lazard, a new Ph.D. student in the program, will also assist in how the visuals affect people and if the messages conveyed are effective.

"If it works, we'd like to hand it off to anyone who'd want to use it," said Mackert. "If nothing else, our students will learn some valuable skills."

The Next Generation of Innovators
Finding the Voice of a Generation