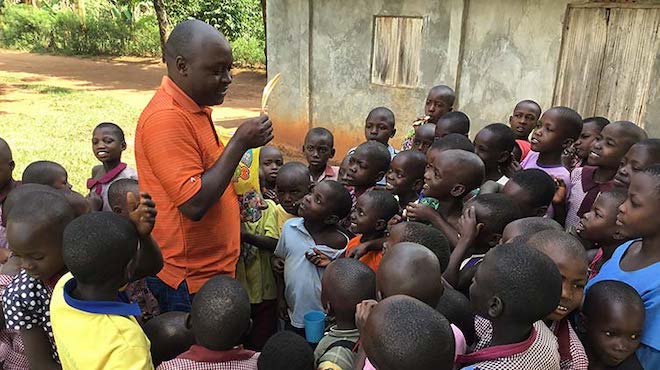 Born in Uganda, Fred Jenga gained a unique perspective of the critical importance of communication, education and kindness. Speaking five languages in a nation of 43 dialects, Jenga possessed a literal appreciation of communication while he advanced his education with its applied importance.

He was raised Catholic in the 84 percent Christian nation and chose to dedicate his life as a priest in the Roman Catholic Church. To be ordained and practice, candidates must be trained in philosophy and theology.

In addition to earning undergraduate degrees in those subjects at universities in Rome and Nairobi, Jenga took courses in journalism and communication studies. He received his Ph.D. from the Department of Communication Studies within the Moody College of Communication in December 2020.

After ordination, Jenga served in Rwanda, Kenya, Tanzania, and Uganda, and helped launch programs to rebuild communities in several areas including public health issues such as HIV, which is often swirling in misinformation and stigmatized by the community.

“We brought in support groups and volunteers in counseling and nursing that could provide psychosocial assistance and in treating it as a virus,” Jenga said. “The first group, we had eight people show up, but by the time I went to the U.S., it had gone up to 150 and grown enough to take on other issues such as orphans who were left behind.”

Jenga was also a media spokesperson in radio and television for a Catholic agency, which spread messages to improve family life in the areas of communication, domestic violence, parenting, education, health and safety, among others. 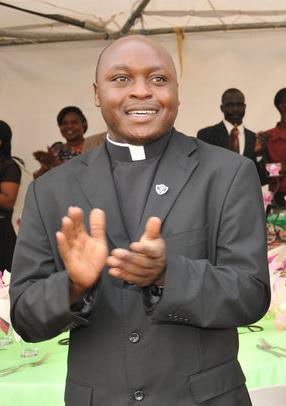 “I saw firsthand the impact of media through those programs,” Jenga said. “I asked if I could get some additional training in this area so besides doing church things, I could do advocacy community-related programs that help everybody.”

Jenga next earned a master’s degree in mass communication in Uganda and then joined a communication studies program at San Francisco State University. After graduating at the top of his class, Jenga looked at Ph.D. programs in places such as Purdue and Northwestern but said UT Austin just felt right.

“I received emails from real people instead of generic ones, and it’s one of the top programs in the world,” Jenga said. “I was offered some financial support and also from having grown up on the equator, having plenty of sun was big for me.”

As a youth performing outreach work, Jenga personally witnessed the fallout and rebuilding of Rwanda following the country’s extreme genocide in 1994. Upon arriving to the Forty Acres, he chose the track in rhetoric and language in the Department of Communication Studies and studied the complex fabrics of religion and politics.

“I’ve researched the U.S. criminal justice system and ways that it can be reimagined from an African’s perspective,” Jenga said. “I’ve looked at the socioeconomic marginalization of rural people in Uganda and biopolitics—the politics of us versus them. I studied how groups can construct a message that is able to convince people to join a cause that leads to the death of so many people, how it functions, and how communities can be protected from it.”

Along with part-time work at Holy Cross Catholic Church in downtown Austin, Jenga served as both a teaching assistant and research assistant with professors Barry Brummett, Madeline Maxwell and Rene Dailey. He took courses taught by Joshua Gunn, Rod Hart, Jurgen Streeck, Scott Stroud and Jeff Treem and worked with Jennifer Jones Barbour in trying to connect the ideas in her class on philanthropy to the philanthropic work he is engaged with in Africa. He cited a special kinship with Brummett, who acted as an academic advisor and friend.

With both the titles of father and doctor in hand, Jenga returned to Uganda and has a teaching job offer in Nairobi, Kenya, at a local university. He plans to continue penning op-eds for several major publications, and to organize community-related efforts in places such as churches, schools and orphanages.

“It’s very important to have a bit of structure while you’re growing up with family, well-functioning schools and communities to give you a certain orientation so you can function,” Jenga said. “If you don’t have any kinds of boundaries, it’s like a river that has lost its banks—it just keeps going and floating in all kinds of different directions.”

With all the issues facing poor communities in Africa, Jenga said the most important root to improving all of them is education.

“I use my platform to be an advocate for other people and access to a good, strong education has just opened so many doors for me. We want young kids to be able to read well, write, have social skills and express themselves so they can be empowered to succeed at other levels,” Jenga said. “Then, I want them to gain a skill of some sort and with these ingredients built into it, we can prepare them to be able to go anywhere to build a life and succeed.”