For 26 years, former dean and Moody College of Communication Department of Communication Studies Professor Roderick P. Hart collected letters to the editors of local newspapers in 12 mid-sized American cities dated from 1948 to 2012 to see what the American people were saying about politics. After many starts and stops, Hart’s book, “Civic Hope: How Ordinary Americans Keep Democracy Alive,” was released March 22 by Cambridge University Press. 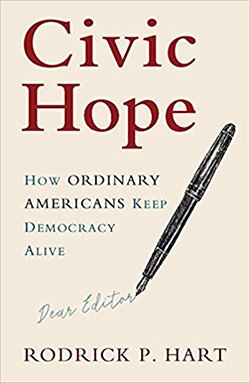 Letters to the editor are a humble act that feature the willingness of participatory democracy as citizens frame their arguments through rhetoric. Hart’s 356-page book highlights those who write and read the letters and why they are often equal parts compelling and irritating and how the tone of the letters have changed over time. The book encapsulates a history of how Americans feel about the government that rules over them and is based on an analysis of more than 10,000 letters, revealing the reasons for people’s attitudes in proper context.

Ultimately, the book is a rebuke against the gloom surrounding current political conversation and acts as a reminder that grassroots civil discourse remains an extremely effective indicator of public opinion and empowerment. We caught up with Hart to learn more about his 13th book.

What compelled you to write this book?

Nobody had ever really produced a comprehensive summary of what everyday Americans think about their government. Doing so intrigued me. I quickly found that letters to the editor were the only source available, so I sampled what their authors had to say between 1948 and the present. I read 10,000 letters in the process!

It’s easy to be cynical about politics. Based on your research, has this gotten better or worse through time?

Letter writers are constitutionally grumpy but they’re also hopeful. They tend to feel that just one better candidate or one more piece of legislation or one new city office will fix things. They’re wrong, of course, but they keep on trying. I love their resilience.

"..letter writers have continued to battle it out with one another and that, really, is what a democracy requires: People nagging one another to solve problems."

With the decline of the newspaper industry, is there a decline in the quality of rhetoric and debate within the citizenry?

What can you say about the current state of political language and how do you explain how we got here?

I found that people who write letters these days are less likely to mention “national touchstones” than they once were, things like freedom of speech or one-person-one-vote or individual liberties. Raised in the television era, they talk more today about candidates’ personalities or how they perform under the klieg lights. That’s a worrisome trend, in my opinion.

How has social media led to a more complicated public discourse?
People who write letters to the editor are quite different from those who offer online commentary. Letter writers sign their names to their letters and often provide their addresses as well. Being anonymous, online commenters tend to be nastier, less responsible. Letter writers live some-where, in some specific place, so they treat one another better.

Has polarization increased and if so, do writers have a more difficult time explaining what their opponents think now more than in past decades?

Democracy, that is, requires effort and only occasional smiling. God bless letter writers, each and every one of them

Yes, letter writers are less able—or less willing—to summarize what their opponents are saying than they used to be. Instead, they pound away at other writers’ motives or their foolishness. That’s a real problem.  A democracy, after all, depends on people understanding what other people are saying and then respectfully disagreeing. Civility means “I get your point but you’re just plain wrong.”

How can citizens feel like they are a part of the decision-making process in government?

There‘s no shortage of opportunities for getting involved. My surveys and interviews of letter writers show that they really care how they are governed. At the end of the day, a democracy depends on volunteers, on people pitching in because nobody else is doing so. That’s why I love letter writers: They refuse to be shrinking violets.

Is there anything else you’d like to add?
There’s an important difference between optimism and hope. Optimistic people always have a smile on their faces; they know things will get better. Hopeful people, in contrast, are often upset with the way things are but know that, with effort, things can improve. Democracy, that is, requires effort and only occasional smiling. God bless letter writers, each and every one of them.