Changing the world for people who stutter

The Arthur M. Blank Center for Stuttering Education and Research will expand the vision and work of Dr. Courtney Byrd. 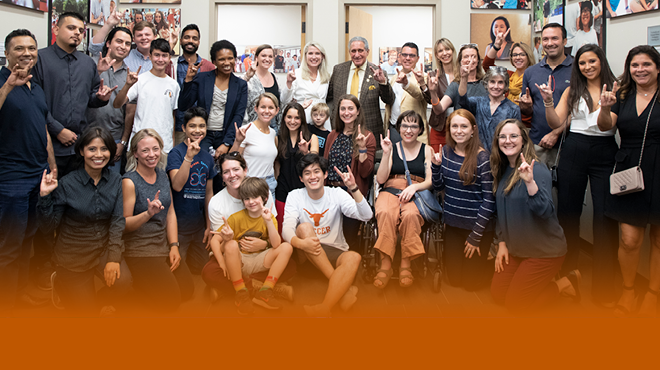 The Arthur M. Blank Family Foundation, through the awarding of a $20 million legacy grant, is establishing the Arthur M. Blank Center for Stuttering Education and Research, which will be an overarching center to expand the vision and work of Dr. Courtney Byrd, who founded and directs the Michael and Tami Lang Stuttering Institute, the Dr. Jennifer and Emanuel Bodner Developmental Stuttering Laboratory and the Dealey Family Foundation Stuttering Clinic in the Moody College of Communication at The University of Texas at Austin.

The Blank Center, founded and led by Byrd, will advance understanding about the nature and effective treatment of stuttering, scale evidence-based programming to treat children, teenagers and adults worldwide, and create a pipeline of expert clinicians and researchers to make quality care accessible to all people.

“The moment I met Dr. Byrd, I was immediately struck by her intellect and her life-long commitment to advancing the field of stuttering, which she translated into extraordinary proposals that captured her vision to meaningfully impact the stuttering community in the United States and beyond,” Blank said. “Through her impressive research and dedicated practice towards stuttering, I know she will change the world in this area and help as many human beings as she possibly can. She is the perfect person to lead the charge because she’s hard-wired now in her beliefs, and you see it in her results, the participants, the clinical work that she’s doing, the research, the education, all of which we will be connected to through the establishment of this center.”

Blank is the co-founder of The Home Depot and owner of the Atlanta Falcons, Atlanta United, Mercedes-Benz Stadium, PGA Tour Superstore, and three guest ranches in Paradise Valley, Montana.

His values-driven business model creates and grows organizations for the betterment of the people they serve. Blank believes that customer needs, when creatively addressed, transform into a viable public service. Likewise, the Blank Family Foundation seeks innovative solutions that enable young people, families and communities to achieve results beyond what seems possible.

These philosophies of dedicating resources, time and energy to produce lasting human value are now aligning with Byrd’s intention to provide access to quality care to every race, class and ethnicity.

“Moody College is the only academic institution in the nation where there is such significant infrastructure and support for stuttering research and treatment, and this legacy grant will further set Moody apart as a leader in this underserved, often misunderstood area,” said Jay Bernhardt, Dean of Moody College.

Over the 10-year life of the legacy grant, the Blank Center will achieve an increase in the number of persons served annually, as well as students and clinicians trained to serve people who stutter. During the next decade, satellite centers will be established nationally, and Byrd’s signature intensive treatment program, Camp Dream. Speak. Live., will be launched in 10 new countries.

“This example is one that speaks to the power of what it means to be a top research university,” UT Austin President Jay Hartzell said. “And just hearing Dr. Byrd’s own story about the kinds of interventions and treatments she was exposed to and doing as a student, grad student and then now how the thinking has changed, it gives you a sense of the power of research, the power of using data, the power of learning what the best practices should be in a difficult field like stuttering.”

Byrd’s treatment model targets core communication competencies, such as maintaining eye contact, particularly during moments of stuttering, using voice and gestures to emphasize meaning, and engaging listeners with positive demeanor. Also critical to the treatment is mindfulness, acceptance and self-compassion, as well as learning how to share that you are a person who stutters, in a way that minimizes stereotype threat, and stuttering on purpose to promote desensitization to stuttering.

“What makes Dr. Byrd’s work so special is the holistic approach. The focus is not on the stuttering, but on the whole person and how they fit and feel in their families, communities and schools,” Bernhardt said.

Stuttering has genetically been part of Blank’s family for several generations. He, too, is a person who stutters who previously attempted treatment to improve fluency.

“Defining communication by how fluent you are doesn’t get at the freedom -- the freeing of the inner person, the inner soul, the inner spirit, the inner mind, the intellect of what each person has to say and feel,” Blank said.

Byrd, her clinical treatment team and undergraduate- and graduate-level researchers have served more than 1,500 children, teenagers and adults who stutter. Their quantitative and qualitative outcomes indicate: Increased communication competence and confidence across general speaking situations and situations unique to their everyday life; increased positive perception in their ability to establish peer-to-peer relationships; increased ability to understand, educate and advocate for themselves and others who stutter; increased societal insight and acceptance of stuttering; increased mindfulness, resilience, self-compassion and hope for their future; and increased quality of life.

“Our focus is on the person, not on the stuttering,” Byrd said. “We’re teaching people as young as 3 years of age to adults over the age of 90, you can communicate effectively, and you can do so even if you continue to stutter.”

Stuttering is a neurophysiological communication difference that involuntarily interrupts the forward flow of speech. In the moments between planning their words and saying their words, people who stutter encounter unpredictable starts and stops.

Widespread scarcity in stuttering research and education are crucial hurdles that must be overcome to adequately address the treatment needs of the stuttering community on a national and global scale.

Historically, speech-language pathologists were schooled to not even say the word “stuttering” in clinical settings, and as recently as this last year, Dr. Courtney Byrd published research to demonstrate that clinicians still avoid use of this word with children and parents. Byrd believes this avoidance can contribute to shame, frustration, anger and even depression surrounding stuttering.

Many people who stutter report their clinical treatment experiences as being focused primarily on fluency, and then they find themselves disillusioned because of their limited outcomes.

“In my own clinical training I was taught to focus treatment on eliminating stuttering,” Byrd said. “But as I’ve listened more to people who stutter and personally attempted to address fluency, I’ve learned that we’re missing the mark.”

Stuttering is a difference in speech which is still largely misunderstood by the public and speech-language pathologists alike. Education and awareness are essential, and Byrd’s intention is to establish holistic, empathetic protocol as scientifically-grounded best practice throughout every community.

A 2016 research study produced by the Lang Stuttering Institute showed that less than 1 percent of speech-language pathologists in the United States self-identify as a willing service provider or specialist with regard to stuttering, its nature and treatment. But nearly all practicing clinicians report they have someone who stutters on their caseload.

The majority of accredited undergraduate and graduate programs allow students to graduate with minimal to no training in stuttering, and they go on to provide substandard care.

The institute has generated new knowledge that supports shifting from controlled fluency to empowering people of all ages to speak confidently, communicate effectively, and advocate meaningfully.

Though the etiology is not psychological, many people who stutter develop a fearful anticipation of their next repeated sound or prolonged syllable. Stereotypes, stigmas and shame persist in a way that people who stutter often withdraw from or completely avoid social, academic and vocational activities that require significant speaking efficacy.

While traditional treatment for stuttering is focused on fluency, Byrd pioneered a scientifically-grounded, whole-person therapeutic approach that helps children, teenagers and adults grow as confident, effective communicators. Treatment targets core communication competencies, such as maintaining eye contact, particularly during moments of stuttering, using voice and gestures to emphasize meaning, and engaging listeners with positive demeanor. Also critical to the treatment is learning how to advocate through self-disclosure and desensitization to stuttering by stuttering on purpose, also known as voluntary stuttering. Mindfulness, acceptance and self-compassion are also key to Byrd’s approach.

“When the adults we work with encounter the children who have participated in our program, it’s very emotional for them because they see that the children have a sense of freedom about communicating that is not restricted by their stuttering. And, they wish they would have had that opportunity to view their own speech differently as a child, but instead they spent most of their lives trying to conform to a way of talking that was not attainable. That is precisely why we have our young children and adults work together in groups. By observing these children, something shifts in the adults, and they realize, ‘What am I waiting for? Why am I letting stuttering stop me from living my life?’”

Byrd, her clinical treatment team and undergraduate- and graduate-level researchers have served more than 1,500 children, teenagers and adults who stutter. Their quantitative and qualitative outcomes indicate: Increased communication competence and confidence across general speaking situations and situations unique to their everyday life; increased positive perception in their ability to establish peer-to-peer relationships; increased ability to understand, educate and advocate for themselves and others who stutter; increased societal insight and acceptance of stuttering; increased mindfulness, resilience, self-compassion and hope for their future; and increased quality of life.

“I envision a world where conformity is no longer the measure of success, where differences are embraced, and when people reflect upon communication, at the core of their reflection is the understanding that it’s ok to stutter because fundamentally it is ok to be different,” Byrd said.

Civic duty to exercise your voice
2020 Friends of the College