John Moore first honed his instincts as a visual reporter from 1985-90 at The University of Texas, where he earned a radio-television-film degree while also working for 11 semesters at The Daily Texan. 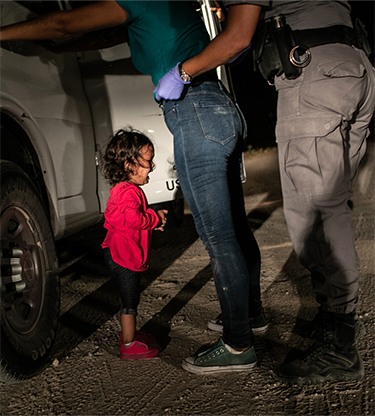 He’s since photographed in 65 countries, on six continents, developing a specialty for breaking and spot news photography. His ability to tell stories through pictures, to explain with images, has been honored with a Pulitzer Prize and numerous other awards.

“The better the picture is, the more interesting the photograph is, the more I can draw people into the story,” said Moore, a senior staff photographer and special correspondent for Getty Images.

Since 2008, Moore has focused on border and immigration reporting.

His summer 2018 photograph, “Crying Girl on the Border,” depicted a Honduran toddler and her mother in the custody of border officials. The photograph, taken in the dark of night, stands out for its framing and color, as well as its intimacy and empathy.

The photograph was named World Press Photo of the Year on April 11.

“I still believe that what we do matters. That is a big motivation for me,” Moore said.

Moore recently visited Moody College and generously answered questions about his career and lessons learned along the way. 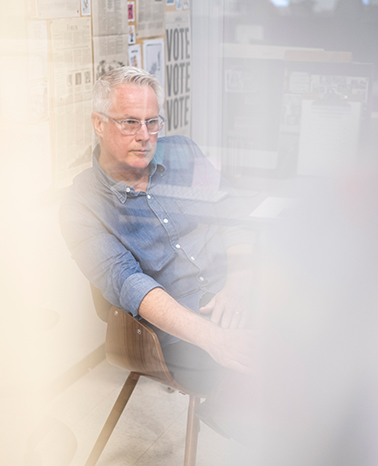 How do you approach your work as both a visual reporter and storyteller? Photojournalism is of course, yes, about photography, but I take the journalism part of that word very seriously. The better the picture is, the more interesting the photograph is, the more I can draw people into the story.

More often than not, it’s not a single image that defines a story – it’s a series of images.

How do you visually discern a setting to capture the story and not just a captivating image? Because I’ve been photographing immigration issues now for more than 10 years, I know the story is complex. It can’t be simplified into one particular angle. There are many sides to the story, and I want to humanize a broad story as much as possible without simplifying it.

I bring my prior experiences with me to hopefully make photographs that are not cliché, but rather educate people. Yes, it’s good to have fresh eyes when you come into a story, but there’s also a danger sometimes when people parachute into a story that they have not covered before that that story becomes over simplified.

I want to make it simple enough to get people’s attention, but then bring them into the complexities and hopefully educate people more.

Did you have to learn that skill over time? About 10 years ago, I was photographing people being evicted from their homes during the foreclosure crisis. The sheriff’s deputies in this county where I was photographing in Colorado had given me access to go in with them when they were evicting people. On one occasion I photographed the gun in the holster of a deputy. I photographed it in a dramatic way, with the gun up close, and people carrying out belongings in the background. It really made it look like these law enforcement officers were forcing people from their homes.

Afterwards, when I tried to go back and photograph again with the deputies, they were upset. The said, “No, you made us look terrible. We were just following the court order, we weren’t nasty to people.” And I realized that I had been unfair in my photographs.

So, yes there are times when I realize that my pictures did not do justice to the story I had covered. It misrepresented the situation. I understood why they were upset. I try to be more careful that the story is accurately reflected in my pictures.

Having that self-awareness about your own work is important to grow in this field. We can’t always believe that what we’ve done is perfect.

What character qualities have helped you along the way? Persistence really matters in this profession. There are many people who are pleased to give you no for an answer when you ask for access. Usually there are far fewer people who have the power to say yes. It’s important for us as journalists to discover who can say yes, and make sure we ask that person for access. We have to find ways to get into situations which other journalists may not have been able to get into. Sometimes that involves hearing a bunch of “nos” first.

If we know there’s a story there, we shouldn’t give up. There’s always a different approach to get access to a difficult story.

How do you develop trust with those you are photographing? I think this profession helps us develop interpersonal skills in talking with other human beings in ways (they) feel important and validated. When others believe that you value them, then they are much more likely to allow you into their lives, even if that happens to be a difficult moment for them.

If they believe you are faithfully trying to tell their story, or photograph their story, they let you in the door.

Figuring that out very quickly is a part of what we get better at over time. When you start in this business, that’s kind of a mystery. Over time you develop the skills to establish trust quickly, otherwise the moment is gone.