The nationally-ranked Department of Communication Sciences & Disorders at the Moody College of Communication is a leader in research, educational programming and evidence-based clinical services.

Students engage with award-winning faculty to make discoveries that define current clinical practice in the fields of speech-language pathology and audiology. They use on-campus laboratories to investigate new ways to expand the mind’s potential to formulate, absorb and express ideas.

Spencer Smith and Rosemary Lester-Smith joined the faculty in Fall 2018. Their research offers a window into the department’s creative methods for translating theories into life-changing practice.

Make the choice to cherish your voice 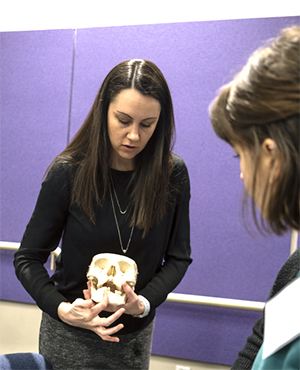 Rosemary Lester-Smith grew up as a classically trained opera singer. Now she studies them.

Lester-Smith started taking classical voice lessons when she was in middle school and continued taking private lessons through college. As an undergraduate student at the University of New Mexico, she first considered studying education until her mother suggested speech pathology.

After taking a communication disorders course, she made her decision and continued her path as a speech-language pathologist.

"Having this singing background and this fascination with this human instrument that we have, I was interested in how people developed voice disorders," said Lester-Smith, a certified speech-language pathologist who has worked in multiple clinical settings.

Her research focuses on a neurological disorder called essential voice tremor, which is related to the movement disorder, essential tremor.

The disorder causes shakiness throughout the body and can affect voice mechanisms, such as breathing. It can also affect the larynx, which houses the vocal folds, as well as the mouth and throat. The voice sounds shaky, which makes people withdraw from communication.

Lester-Smith is opening a voice lab at UT and aims to develop the tools that can be used to improve the diagnosis of essential voice tremor and help stabilize it.

"My research is really geared to understand this disorder and treat it behaviorally,” Lester-Smith said.

The lab will provide comprehensive voice assessments for expert voice users, such as singers, and individuals with disordered speech. Researchers will assess breathing, visualize the vibration of the vocal folds through endoscopy and do an acoustical analysis.

"By getting involved in this field, you impact not only the individuals and their families, you impact their ability to go out into the community and to their jobs and communicate with everyone around them," Lester-Smith said. "It's an individualized effect on communication that becomes widespread in the whole community."

This is your brain on music 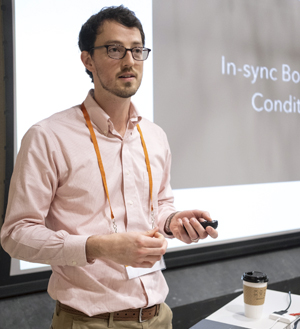 Music exists for a purpose. Long ago, it organized and bonded primitive societies to survive. Specific sounds and notes gathered people for activities like hunting or farming.

Today, music has the power to even shape the brain.

"Music is a really interesting because we can learn a lot about how the brain changes by participating in this form of art," said Spencer Smith, who is working to open the Texas Auditory Neuroscience Lab at UT.

Smith is an auditory scientist, and his research focuses on how sound can shape the brain. More specifically, his research suggests music can develop the brain's neuroplasticity, which is its ability to reorganize itself. By engaging with an instrument though muscle movement, hearing feedback and making adjustments on the fly, musicians are also shaping their brains and enhancing function.

"The most interesting thing isn't necessarily that music shapes the brain, but that the brain is shaped by some sort of external stimulus," Smith said. "We might be able to harness that ability and translate it into different skills that are clinically applicable."

He wants to help patients -- no matter how old -- who have difficulty hearing in noisy environments train their brains to be able to focus on certain sounds, and music is one lens that can be looked through to make that happen. Individuals with hearing loss, for example, could use engagement therapies to improve hearing function.

From working at the research lab at Northwestern University, where he was a postdoctoral fellow, Smith witnessed the positive results when individuals are involved in musical training, especially children. When they are put into music lessons from an early age, their cognitive functions tend to improve.

"Music tends to improve skills that we know are to be important, such as reading level and all sorts of cognitive functions," Smith said.