Neal Spelce (B.A., B.J., B.F.A ’58) has been a media legend in Central Texas and beyond for more than 50 years in the fields of journalism, public relations and media. After earning degrees in journalism, speech and radio/television from The University of Texas at Austin, Spelce worked as a broadcast journalist for KTBC-TV, where he became known for his heroic live coverage of the UT tower shootings on campus Aug. 1, 1966. 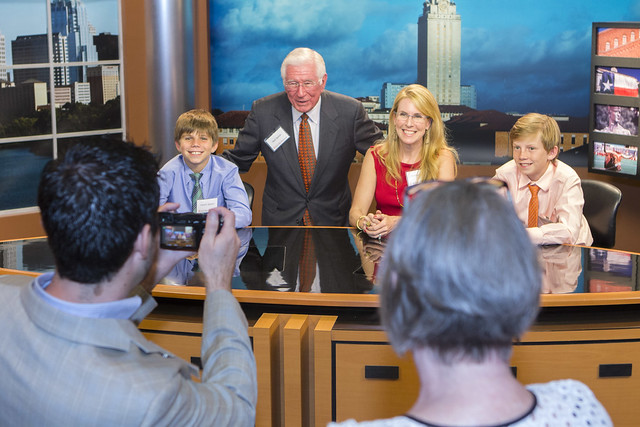 During his career, Spelce earned numerous community and industry honors including top awards from the Society of Professional Journalists, the Public Relations Society of America and the National Headliners Clubs highest award for consistently outstanding television news coverage.

Speakers at the event included Catherine Robb, attorney and granddaughter of Lyndon B. and Lady Bird Johnson;  Robin Rather, CEO of Collective Strength and daughter of journalist Dan Rather; Moody College Dean Jay Bernhardt and Assistant Dean Mike Wilson; and School of Journalism Director R. B. Brenner. Spelce also delivered remarks as he accepted the honor.

“By honoring his legacy in one of our most important classrooms, we know that Neal Spelce will continue to inspire students for generations to come.”
- Dean Jay M. Bernhardt

“I’m thrilled to be able to recognize Neal’s accomplishments and public service by officially dedicating this room the Neal Spelce Broadcast Journalism Studio,” said Bernhardt. “By honoring his legacy in one of our most important classrooms, we know that Neal Spelce will continue to inspire students for generations to come.”