S. Craig Watkins has invested most of the past decade in observing, researching and analyzing digital behaviors among young populations. His findings have produced three books and a concept for learning that emphasizes intellectual, design thinking and creative energy over technology and digital devices. 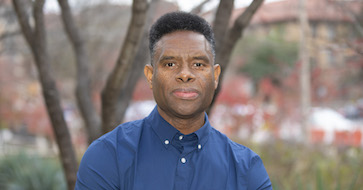 Part of an interdisciplinary team of researchers commissioned by the MacArthur Foundation, Watkins was imbedded for more than a year within a high school, and they observed both the perils and possibilities associated with how technology is being incorporated in the classrooms. Interviews with students, teachers and parents allowed them to re-think what learning means in a tech-driven society, resulting in the release of The Digital Edge last December.

“One of our takeaways from (The Digital Edge) is that schools as they are built really aren’t designed to prepare kids for the world they’re transitioning into,” Watkins said. “I left that work thinking if schools aren’t adequately preparing them for the innovation economy, where do they go to learn?”

Released in May, Don’t Knock the Hustle analyzes how young creatives are cobbling together resources to navigate an age of uncertainty.

Watkins, who joined The University of Texas faculty in 1995, suggests that future readiness – the ability to think creatively, practice lifelong learning and grapple with uncharted problems – will become the primary skill of tomorrow’s economy.

“There’s a sense of empowerment, but also certainly a sense of anxiety as well. Jobs that lead to a stable future and upward mobility are becoming more and more difficult to find and maintain,” Watkins said. “It requires you to be flexible, creative. Requires you to develop this sense of agency and empowerment and be in charge of your own career path.”

How did you develop your specific research interest? Our job as researchers is to try to find what we call voids, those unanswered questions or things we haven’t necessarily gained more clarification on, or even thought to ask.

For me the focus was trying to figure out what is distinct about this period that we live in. How are the things we associate with media and technology being turned upside down? When I grew up, it was primarily being driven by corporate media, and they produced the content. Really starting in the early 2000s with MySpace, Facebook, YouTube and later Twitter and Instagram, things changed.

Content started being created from the bottom up, and young people were creating more content, telling more stories. The notion of media, do-it-yourself media, user-generated media – I just became fascinated with that because it’s such a radical departure from the media that we previously experienced.

What motivates you to keep asking questions, to remain curious? As researchers and professors, it can be personal experiences that open up your thought process which then introduces you to interesting questions.

For me, being on a college campus and seeing how students have changed, their relationship to technology, more and more tech coming into the classroom, having a young daughter and watching her grow up in this age of smart phones and mobile media – all of those things came together to motivate me to pursue those interests.

How has technology affected learning behaviors? What we argue in The Digital Edge is schools tend to think that just the mere acquisition of technology is a marker of progress. We found technology-rich classrooms that are curriculum poor.

Based on research we’ve done, if I were designing a classroom today for middle school or high school, I wouldn’t necessarily put the emphasis on computers, smart phones or tablets, I would put the emphasis on helping young people to think critically, and to think in innovative and creative ways, by designing exercises that allow them to express the kind of agency that uses technology as a tool but not necessarily as a deliverer of learning that focuses on design thinking, data literacy and creative problem solving and storytelling.

How has technology affected the job market and career paths? The biggest technological change is the drive toward the automation of work. For young creatives, I look at how they are trying to navigate what economists call the age of precarity, an uncertain economy.

They must confront this idea that a career path doesn’t automatically lead to upward mobility even though you have a college degree. In this sense, they are more focused on thinking about being entrepreneurial, not necessarily to make money, but in this sense of expanding work opportunities, when the world of work as we know it is changing rapidly.

There’s a sense of empowerment, but also certainly a sense of anxiety as well. Jobs that lead to a stable future and upward mobility are becoming more and more difficult to find and maintain. It requires you to be flexible, creative. Requires you to develop this sense of agency and empowerment and be in charge of your own career path.

How will the knowledge you generated writing these two books influence your work and leadership at the Institute for Media Innovation? Algorithms and artificial intelligence are more prominent in our lives. It’s getting to the point that they are and continue to shape virtually everything we do. My goal is to help the institute conduct research that better understands the social and ethical implications of AI and supports the creation of a more diverse and inclusive community among those who are investing in the design and building of our smart future.