On Digital Disruption and Innovation

The School of Journalism is in the midst of its centennial this year and will launch the next 100 years with new chair R.B. Brenner, a former Washington Post editor and award-winning journalist.

Brenner joins UT Austin after serving as deputy director of journalism at Stanford, holds a bachelor’s from Oberlin College, began his career at the Winston-Salem Journal in North Carolina, and worked as a reporter and editor at newspapers in California and Florida before joining The Washington Post.

As part of a team that won the 2008 Pulitzer Prize for Breaking News Reporting through coverage of the 2007 shootings at Virginia Tech, Brenner is used to managing newsrooms and forming partnerships. He will take over from Glenn Frankel, who plans to write full-time following a four-year tenure as chair.

Returning to the Forty Acres, Brenner previously taught as a visiting lecturer in the School of Journalism in the spring of 2009.  Following changes made to the curriculum in 2010, Brenner doesn’t foresee any immediate revisions to course offerings or degree plans.

“I like the metaphor of ‘the house is well-built,’ and so you want to keep looking inside the rooms to make sure they’re as strong,” said Brenner. “Now it’s time to look at collaborations across other departments and in other colleges at UT to see what else we can discover.”

“I like the metaphor of ‘the house is well-built,’ and so you want to keep looking inside the rooms to make sure they’re as strong,” said Brenner. “Now it’s time to look at collaborations across other departments and in other colleges at UT to see what else we can discover.”

In the wake of layoffs and unreliable profit margins due to the digital disruption of journalism in media, Brenner said he thinks the industry has found firmer footing and that innovations will lead to greater opportunities for those who are well trained and literate in technology.

“Teamwork between reporters, digital journalists, Web developers, programmers, and designers are really leading to some polished pieces of work,” said Brenner. “I think you’ll also see more personalization of news that caters to the unique individual.” 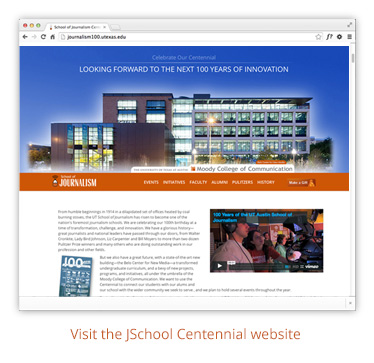 According to Brenner, the greatest challenge aspiring journalists face is the demand for them to be experts at a whole suite of skills. These include writing, shooting and editing video and audio, taking pictures, analyzing data, using social media, working in teams, and mastering the tenets of how to tell a good story.

“As we move even faster and in this type of environment, it’s somewhat overwhelming,” said Brenner. “We need to make sure critical thinking skills are still being addressed and that journalism remains in the best interest of democracy.”

Brenner begins his role as chair in August. For more coverage on the School of Journalism's year-long celebration including information on upcoming events, visit the centennial website.