Dr. Stephanie Grasso is an Assistant Professor pursuing research in the Department of Speech, Language, and Hearing Sciences at The University of Texas at Austin. She joined the faculty within Moody College in Fall 2020 as part of a cluster hiring initiative focusing on “Diversity in Cognitive Functioning in Late Life” and is the director of the Multilingual Aphasia and Dementia Research Lab.

In this role, Grasso works to bridge disciplines across campus and spark the interprofessional collaborations necessary to understand, effectively treat, and intervene against cognitive aging and dementias in diverse populations. 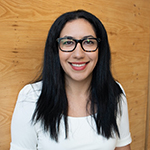 Grasso’s research focuses on bilingual adults with aphasia, a condition that hinders language comprehension and production. Aphasia can be caused by stroke, traumatic brain injury, tumor or neurodegenerative disease, and Grasso relies on neuroimaging to better investigate how brain integrity may predict an individual’s ability to respond to speech and language intervention.

More specifically, Grasso studies primary progressive aphasia, which is caused by neurodegenerative disease. What begins as a “gradual onset of difficulty with communication” continues to get worse until persons “are not able to rely on verbal communication as their primary modality of communication,” Grasso said.

Aphasia is highly variable; each individual demonstrates different patterns of difficulty. Expanding the research participant pool to include bilingual speakers and those from historically marginalized populations strengthens understanding of speech and language processes, while also mitigating clinical bias.

“When you examine only one language of a bilingual speaker, you are really not seeing the full picture,” Grasso said.

While the number of bilingual speakers is increasing, the United States has historically been a monolingual majority, which has paled the academic literature that guides assessment and clinical practice in this area. Yet for the bilingual speaker, there is a need to maintain communication abilities in both languages, and treatment resources should be available that support the integrity of each.

Many bilinguals with aphasia do not have access to bilingual intervention, due, in part, to a shortage of bilingual speech-language pathologists to treat these individuals.

Most importantly, diversity in research assures that no one feels hopeless in their search for treatment due to their cultural or linguistic background. “A major source of my curiosity,” Grasso said, “comes from the disconnect that I’ve observed between the available evidence and the needs of the community. It’s important that my research be applicable to the broader population and guides clinical decision-making in culturally and linguistically diverse populations.”

Grasso recalls a recent participant whose dominant language was Spanish and spoke Spanish the majority of the time yet was receiving treatment in only English. “When the participant met our team for the first time, their sense of relief was palpable. They were so reassured to find a place where there was an understanding of their relatively rare disorder and a team of professionals who could speak with them in their native language and understand their cultural background,” Grasso said.

In the long term, the primary way to reduce this mismatch is to train future speech-language pathologists in culturally-humble methodology -- even if the trainees are not bilingual themselves.

In this way, speech-language pathologists will be able to best support bilingual patients, whether that means referring the patient elsewhere or working with an interpreter or translator to meet the patient where they are.

A Collaborative Approach to Care

Aphasia is an acquired language impairment that may impact a person’s ability to comprehend and produce language. Individuals may have difficulty findings words, comprehending what is said or speaking in correct and complete sentences. The disorder can be accompanied by a sense of loss, with regard to both a person’s sense of place in the communicative world and the skills that once allowed them to participate in it.

Treatment focuses on capitalizing upon strengths in cognitive-linguistic processes in order to support communication, while also educating individuals with aphasia on how to use strategies and tools that can be used in different communicative contexts.

In this case especially, a team-based approach to care is essential to maximizing cognitive and behavioral outcomes.

A speech-language pathologist specializing in primary progressive aphasia, like Grasso, works in tandem with other health professionals such as neuropsychologists and neurologists, among others. Grasso recently received a Texas Global Faculty Research Seed Grant entitled, “Rehabilitating Communication in Bilingual Speakers with Language-Prominent Dementia.” To that end, she is collaborating with Dr. Maya L. Henry (UT Austin) and Dr. Miguel Angel Santos-Santos (faculty neurologist) at Sant Pau Biomedical Research Center in Barcelona, Spain in order to investigate the effects of a behavioral speech-language intervention tailored for Spanish-Catalan bilingual speakers with primary progressive aphasia.

“Interdisciplinary research is key to making notable scientific discoveries, especially in areas of research that have been historically understudied,” Grasso said. “The interventions we provide are delivered via teletherapy which has allowed us to reach individuals across the globe. This has been especially powerful during the pandemic where individuals who are isolated can still access treatment.”

Patterns of the bilingual experience vary depending upon the individual and the broader societal context, such as how often the language is used and the age of first exposure. Grasso is interested in this variability because comparing the characteristics of bilingual speakers with aphasia in different parts of the world will provide a strong foundation for understanding the general and specific effects of bilingualism, including how they might influence the presentation of different aphasia types.

She recently co-authored a paper (with Dr. Jessica de Leon) showing that highly educated bilingual speakers in the United States who presented with one type of primary progressive aphasia (logopenic) showed initial symptoms significantly later than monolingual speakers. This adds to prior research findings that also indicate bilingualism may be associated with a later age of symptom onset in certain forms of neurodegenerative disorders.

“It’s an exciting time in the field because a major question remains: What are the mechanisms that lead to these observed delays in age of symptom onset in bilingual speakers with distinct types of dementia?” Grasso said.

Many factors are associated with a later age of symptom onset, including active, lifelong learning. More research-generated knowledge about the different factors that delay onset could contribute to developing preventative programs.

The research conducted by Grasso and other faculty can inform clinical care that will help individuals fully participate in their lives and equip them with the tools necessary to communicate effectively.

“When we think about what makes life really meaningful for all of us, at the end of the day is being able to maintain relationships,” Grasso said, “and the way that we do that is by communicating with each other.”