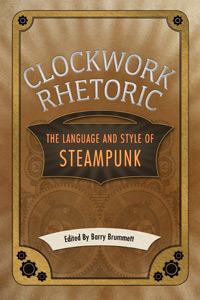 Barry Brummett, chair of the Department of Communication Studies in the Moody College of Communication, released the anthology “Clockwork Rhetoric" last month on steampunk.

Steampunk is an aesthetic style grounded in Victorian iconography, including steam engines, mechanical works, locomotives, gears, pistons, induction motors and goggles. Much of steampunk style has been seen in the American West and made famous by individuals such as authors Jules Verne and H.G. Wells.

While many individuals are unaware of the style, some follow it with a cult-like reverence. Acting not only as a sub-genre of science fiction for media, steampunk is also an artistic style, clothing and jewelry fashion, music, culture and community.

Examples of steampunk in popular culture include many of the films by Tim Burton such as “Edward Scissorhands” and “Coraline,” and the action movie “Wild Wild West.”

Edited by Brummett, the collection has 15 chapters with essays by 11 authors including Associate Professor Joshua Gunn, also of the Department of Communication Studies. The University of Mississippi Press published the 224-page anthology on Sept. 2.

“Acting not only as a sub-genre of science fiction for media, steampunk is also an artistic style, clothing and jewelry fashion, music, culture and community."

Q: One point you make in the introductory material is that there have been few scholarly studies of steampunk, and fewer still of the rhetoric of steampunk.  Why is that, do you think?

A: One of the most fascinating things about steampunk is the gap between its public popularity and its scholarly study. If you will Google steampunk, millions of entries pop up. I think one reason is that it is a fairly new phenomenon, having grown out of youth culture’s fascination with Goth a couple of decades ago. It just hasn’t been around that long; on the other hand, that makes it a new and exciting field of study! Another reason may be that steampunk grew in several different fields: Goth, as I mentioned, or as the Birmingham chapter shows us, in Japan, or out of science fiction literature and film. Steampunk has emerged as a merged aesthetic and cultural movement, and that divided genesis may have to do with a divided attention to it. Finally, I have found that many people know what steampunk is, but they didn’t have that particular term to apply to it. If you show them examples they will realize they’ve experienced it, but maybe not by that name! 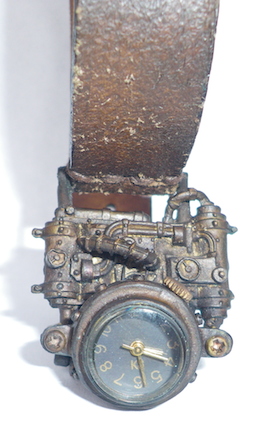 A belt designed with
steampunk style.

Q: Do you anticipate increased scholarly attention to steampunk now?

A: I hope so. I was grateful to the University Press of Mississippi for taking on the project, since some other presses declined, giving the reason that they had never heard of the topic! I think one effect of this book will be to generate academic interest in steampunk. You will note what a wide disciplinary range we have among the authors, and I think that will help to attract scholarly interest across many fields. For instance, at the last convention of the National Communication Association, two or three panels were offered on steampunk, which was a welcome new development, and I expect to see more.

Q: Do you think the book has only academic applications?

A: Oh, not at all. Note the interesting, very popular real-life texts that are studied in the book. I think people who are not scholars can find a lot of valuable insight in the book. And let’s remember, there are a lot of people outside of the academy who are interested in steampunk. Just search on eBay for the term steampunk and see what a wide variety of products are being offered. In my chapter, I study some products I actually purchased on eBay; I’m not the only one doing so, and so I think the general public will find many interesting connections with our essays.

A: Steampunk is a continually evolving aesthetic form, but I think it will be around for a while. What is next is more in the hands of the artists, cosplayers, cartoon and comicmakers, and musicians than it is academics. New social and cultural forms will emerge that connect with steampunk. For instance, steampunk bars are popping up here and there in some interesting cities, and how those come to anchor small communities of aesthetically progressive people will be interesting to see. Steampunk has an interesting and changeable future.