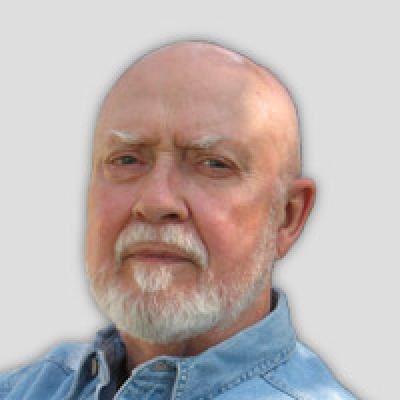 Bill Korbus discovered the possibility of being a designer during his freshman year of college. A BFA in Industrial Design in '57, another BFA in Art Education in '60, and an MS in Journalism in '74 -- all from the University of Illinois -- make up his academic history.

From 1960 through 1974, he was the art director at WILL-TV, AM & FM, the educational broadcasting arm of the University of Illinois. He did photography, scenic design, graphic design and art direction, and for several years was the on-air host of a children's show. In addition to his work as art director, he taught graphic design in the Department of Art and Design at the U of I for four years.

After earning his Master's degree, he became the Art Director for the Nebraska Educational Television Network (NETV), a state-wide network headquartered in Lincoln, Nebraska. While working as the Art Director, he also taught at the University of Nebraska for a year on a teaching fellowship. Under his leadership at NETV, the Art Department won more than 80 national and international design awards.

At UT-Austin, he created and launched Visual Design in Journalism in 1978, a course he taught for the next 20 years until his retirement in 1998. The class provided students the opportunity to do visual design projects for many non-profit organizations in Texas, and to win numerous awards from the AEJMC.

The course began with very little equipment and class work was done entirely by hand. It transitioned into the computer age during Korbus' tenure and continued to prepare students for the new world of communication and technology.

He now invests his time reading all those books he collected over his teaching years and never found time for, spending time with friends and his dogs, traveling, and catching as many live theatre performances as possible. He most enjoys not conforming to anyone else's agenda.