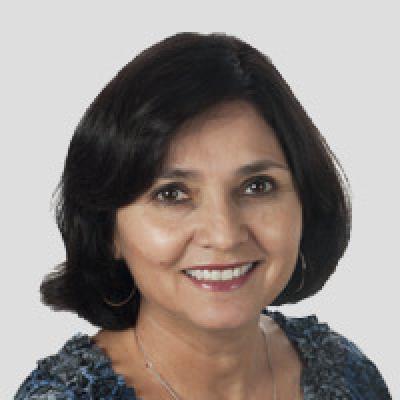 Maggie Rivas-Rodriguez has more than 17 years of daily news experience, mostly as a reporter, for the Boston Globe, WFAA-TV in Dallas and the Dallas Morning News. Her first job was as a copy editor for UPI in Dallas. She served as the Morning New U.S.-Mexico border bureau chief, based in El Paso.

Her research interests include the intersection of oral history and journalism, U.S. Latinos and the news media, both as producers of news and as consumers. Rivas-Rodriguez founded the Voces Oral History Project (formerly the U.S. Latino and Latina World War II Oral History Project) in 1999, which has videotaped interviews with over 960 men and women throughout the country. Stories based on those interviews are written mostly by UT journalism students, as part of their coursework. The project has several components designed to reach audiences ranging from school children, to academics, to the general public. Voces has organized conferences, produced books and mini-documentaries, co-produced a two-act play, (through Arizona State University Public Events and the University of Texas' Performing Arts Center), created educational materials. Voces has become an international resource for documentary film producers, scholars, journalists and the general public. It is supported by grants, state funds, and private donations.

Rivas-Rodriguez has been active since her college years in volunteer efforts to bring greater diversity to the news media. She was on the committee that organized and founded the National Association of Hispanic Journalists in 1982. She began one of the NAHJ's most successful student projects: a convention newspaper produced by college students and professionals. The convention newspaper became the model for other industry organizations (ASNE, NABJ, AAJA) as a way to develop mentoring relationships and to train students.

Oral History
Inclusion
Latina/os in the US