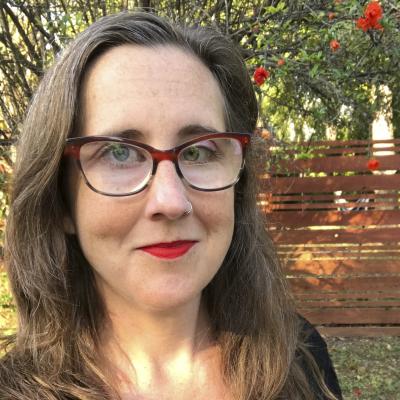 Katherine Craft is a born and raised Texan with low vision. She has extensive experience as a playwright and theatre maker - she has an MFA in Screenwriting from the University of Texas at Austin, and holds an MA in Applied Drama from Goldsmiths College at the University of London.
She's the creator and writer of the Snap Original Series Kappa Crypto, an NBC/Snap production, and was recently staffed on a new Apple TV+ comedy series. She received a 2017 HBOAccess Writing Fellowship, and her pilot Halfway, written as part of the program, premiered at Tribeca Film Festival in April 2019. She has written and produced several short narrative films, including June (2018), which won first place in the HBO 2018 Asian Pacific American Visionaries showcase, and Charlotte and Charlie (2018), which was a finalist in the 2018 PBS Online Film Festival. ​
She also founded Conspire Theatre, a nonprofit that uses theatre to work with women during and after incarceration, and was a teaching artist for arts education organizations in Austin, Chicago, and London. She was the Hotline Coordinator for the Lilith Fund, an abortion fund in Austin, TX, for six years. She currently splits her time between LA and Austin. ​