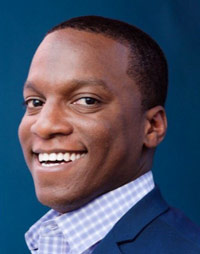 Jerren Wright is a native of Houston, Texas.  He was a student athlete at The University of Texas at Austin as a member of the Longhorns’ 2005 National Championship team. In addition to playing football, Jerren was involved in numerous on-campus activities including serving as an officer for UT Austin’s oldest and most prestigious men’s service organization The Texas Cowboys.  Upon graduating from UT Austin with a B.S. in Corporate Communications and a Minor in Business, Jerren moved from Austin, TX to Malibu, CA to attend Pepperdine University School of Law where he would eventually serve as its Student Body President.  While obtaining his J.D., Jerren simultaneously secured his certificate for Alternative Dispute Resolution from Pepperdine School of Law’s Straus Institute for Dispute Resolution. Upon graduating from the law school in 2009, Jerren also obtained his M.B.A. from Pepperdine’s Graziadio School of Business and Management in 2011.

Since completing graduate school, Jerren has practiced entertainment law at prominent entertainment law firms and television studios in and around Los Angeles including NBC-Universal and ABC Studios. He has also been an active member in the music industry as a drummer and songwriter for various artists and founded a music management/consulting company in 2013.  Jerren has also concurrently served on various non-profits and community service efforts from mentoring children via Big Brothers Big Sisters of Los Angeles to sitting on the Leadership Advisory Board for Vista Del Mar – a program which provides comprehensive rehabilitation services for at-risk children and families in the greater Los Angeles area. Jerren currently serves as Legal Counsel for Google/YouTube Originals and prior to that served as Corporate Counsel for Amazon Studios where he oversaw numerous multi-media and television projects from development through distribution for both domestic and international exploitation.