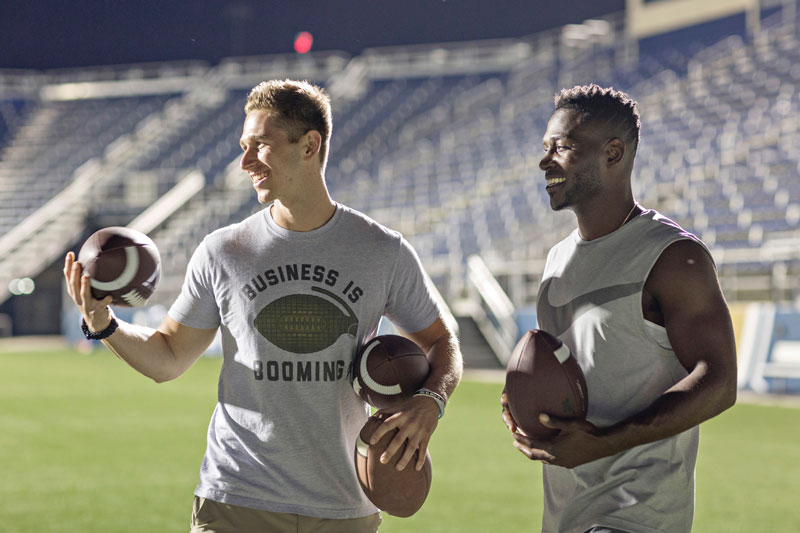 "Journalism taught me to dig for information and understand a situation. As a journalist, you have to be curious. It taught me to hustle, and I hustle to get information in my job now." -- Adam Beard

He enjoyed playing football and basketball, and after writing a story in fourth grade about his grandfather’s necklace, he discovered joy in telling stories.

His dream to be a sports journalist was born.

Beard first attended the University of Missouri and transferred to the Moody College of Communication’s School of Journalism in 2012. Throughout his time at UT Austin, he worked for many different student-run organizations such as The Daily Texan, TSTV and KVRX-FM. He also interned at local broadcast stations in Dallas and Austin, worked as an assistant to former Dallas Cowboys football player Michael Irvin and on the social media team at USA Today.

Through broadcast internships, he discovered he did not want to pursue traditional journalism. However, he used these opportunities to connect with multiple people who worked in the sports, media and marketing industries. These connections and lessons led him to work at ESPN, which he soon left to work for Nike and now serves as the communication manager for the Jordan Brand.

As told to Landry Allred

The first or second week of summer between my sophomore and junior year, I was home in Dallas. I had no internship lined up. True to routine, I went to the gym on a regular weekday morning, but this one turned out to be different. Michael Irvin was there, having fun and playing basketball. At that point, I was interested in broadcast journalism and was still trying to land a summer internship. I knew he worked for the NFL Network.

My mom and dad taught me this phrase, “It never hurts to ask. Don’t be afraid to ask.” So, I thought, “You know what? There’s nothing to lose here. The worst that could happen is he says no or completely ignores me.” I introduced myself, and he gave me his card.

I didn’t think anything would come out of that, but when I reached out to him over email, he gave me a call and asked me to come to his house and talk.

He brought me into his home office. I was sitting in a suit, and I brought my resume. It felt like he was interviewing me for a job, but I didn’t know what job.

By the end, I remember him saying, “Why don’t you work with me one-on-one over the summer? You can come to the house every day, nine-to-five, like a normal job, and we’ll work.” Of course, I said yes and but didn't have a clue what I was getting into. I just knew it was going to be amazing.

That summer changed my life.

Growing up, my dad worked worked for a company that worked closely with Nike, so I grew up wearing Nike. But for me, ESPN was always the dream.

My marketing professor Herbert Miller always talked about self-branding and used one of his former students as an example — Hans George, who always wanted to work at Nike. He did everything to find an opportunity at Nike as a graduate student, but he never heard back. Ten months after he graduated, he got a call from Nike and has now been with the company for 26 years.

I was so fascinated by that story. I wrote his name down, went home, Googled him, found him on LinkedIn and messaged him cold, mentioning that our mutual professor shared his story in class. It was all out of curiosity.

He responded within 24 hours, and we got on the phone. Hearing about the culture and different opportunities at Nike, I was truly in awe and did everything I could from that day forward to put myself in a position to potentially work at Nike.

All of my internship experiences helped me understand what I want to do and what I don’t want to do.

During my internship at KXAN in Austin, I had multiple experiences in this industry where I was sitting in the greatest seat possible, with access to tell stories that people wanted to hear, but for whatever reason, I was not enjoying it.

I never felt fulfilled covering games, but I felt so fulfilled that summer with Michael Irvin. I knew then that I wanted to support these athletes and help them inspire others because there’s so many kids who look up to athletes.

I tried to think of ways I could still use journalism but apply it to a different field or job.

After I got off the phone with Hans, I applied for a Nike internship, but I didn’t get it. The next week, some random Facebook post in a UT group said there was a USA Today internship open on the social media marketing team. I applied, emailed, interviewed and got it.

That was one of my best internship experiences. I learned basic office skills and how to manage a social media account for a publication, which has helped me in my current role.

But something struck me about Nike. Hearing Hans talking about not only what the brand does but how they do the work seemed like something cool to be a part of.

Your Class is More Important Than You Think

At graduation, I had nothing lined up. But I had this weird confidence that everything was going to work out. One of my mentors always uses the phrase, “It’ll work out in the end. If it doesn’t, it’s not the end.”

Near the end of my last semester, my journalism professor Kevin Robbins brought in Kirk Goldsberry, who worked at Grantland, an ESPN affiliate. After class, I asked Kirk to get coffee and told him my aspirations of working at ESPN. He had me work on one project and then introduced me to two people at ESPN. One of them helped me understand what job was possible, which was the one I ended up getting.

After I graduated, I visited Nike’s campus in Portland to meet Hans and found out he set me up to also meet with eight different people.

In Professor Miller’s class, he gave advice to create a personal brochure and said to tailor it toward what company you want to work for. I took it to heart and created one tailored toward Nike. I made copies of that brochure and gave it to every person I met that day.

I was only at ESPN about six months because one of the people I met with at Nike reached out to me and wanted me to work at Nike as a contractor.

I was fortunate enough to be remembered.