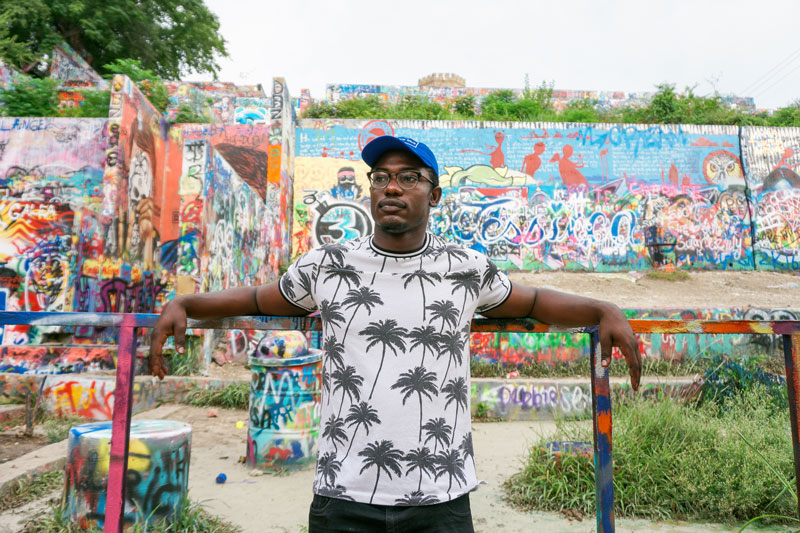 Timothy Cole Jr. is the author his own life, and he’s writing himself into many characters — the “skinny” teenager turned buff, the high school football star who became an emotional anchor for the Texas Longhorns football team and the college student-athlete who pursued two Moody College of Communication degrees before starting his own company.

Cole views challenges as opportunities to write more life chapters, and all his experiences add up into a fearlessness that silences adversity and activates optimism.

“We’re beings with infinite potential,” Cole said. “There’s an answer to every question, and a solution to every problem. I’m just one of those determined individuals to figure them out.”

Growing up in Brenham, Texas, he focused on school and football, quickly claiming the outdoors as his playing field. Cole started playing football at 6 years old and dreamed of college ball. His potential bloomed into tangible skills when he started on varsity as a high school sophomore.

His peers often called him “skinny,” and that drove Cole toward motivational videos online, where he learned how to develop his own training programs. Glen West, Cole’s high school coach, witnessed Cole’s transformation, which included 20 additional pounds of muscle and a powerful mindset.

“Football players have to be very disciplined,” West said. “Tim could do whatever he was asked.”

Throughout high school, Cole demonstrated maturity beyond his years, especially under pressure. West is an emotional coach, and he admits he raised his voice a time or two during practice. Instead of rebelling or shutting down, Cole responded with reassurance – a signal to his teammates that everything was under control – and focused on West’s message instead of the intense delivery.

“Sometimes you need somebody to push you because they see what you can do,” Cole said. “It’s helpful to have someone on the outside looking in, who’s says, ‘You can be this.’”

With his athletic ability and leadership aptitude, Cole earned the right to pursue his education at The University of Texas on a football scholarship. He majored in communication studies as an undergraduate, and then followed his curiosity about the psychology of advertising into the graduate program at Moody College’s Stan Richards School of Advertising & Public Relations.

During his college years, Cole’s journey grew more arduous. However, adversity’s arrival only revealed more clearly the depth of his character.

Not long after his 21st birthday, Cole’s older brother unexpectedly passed away. He was only four years older, and Cole realized life was fleeting.

“I was living in this bubble of comfort,” Cole said. “I had my savings, parents, school, great things. And then your world stops.”

Instead of abandoning his goals or backing down against the brick wall of grief, Cole chased harder. He re-evaluated his future and built a fearless mentality.

And it was put to the test during his senior football season. Moments before taking the field to play West Virginia, Cole was notified his father was hospitalized following a heart attack. Knowing his dad was stable, but still emotionally drained, Cole thought of others more than himself, choosing to play in honor of his father and deceased brother, and once again demonstrating to teammates a leader’s calm resolve in a stressful situation.

"I had so many different emotions," Cole said. "I didn't want to sit around and just mope and be down on myself. I decided to use those emotions and pour them out and play for them."

Cole attempted to pro football but did not receive a call on draft day. While the door to football closed, the door to advertising opened. He transferred skills from football — motivation and hard work — to another area in life.

“I pushed this dream until the wheels fell off,” Cole said. “Once I got the sign, I had a gut feeling to keep going and try something else. I never put all my eggs in one basket. I don’t want to put myself in a box and say I’m just this one person.”

By taking time in college to explore other interests and hobbies, Cole’s identity was never strictly tied to football.

In Summer 2017, Cole connected with the football program’s creative director, Matt Lange, who hired him as a graphic design intern for the following school year while Cole also worked on his master’s degree plan. Cole also joined forces with football teammate Caleb Bluiett, one of his equipment managers Amin Bahari, and Amin’s twin brother Amir Bahari to start Elite Sweets, a protein donuts company. It officially became a business in early 2018.

Amin Bahari watched Cole grow into the nuanced role and expectations of a start-up business co-founder. He overcame an uneasiness with public speaking by pushing out of his comfort zone. Cole’s authenticity and conviction to his values and morals assert him as a natural leader.

The next phase in Cole’s life includes marketing Elite Sweets to a national level, pursuing fashion and music, diversifying his skills and challenging himself creatively. As a dreamer, doer, leader and explorer, Cole fully seeks his own characters and combs through opportunities to burst forth into the life he creates.

“You’re in charge of your own story,” Cole said. “We all have our own identity. We just use each other’s success stories to tie to our own and carve out our own niche in life.”