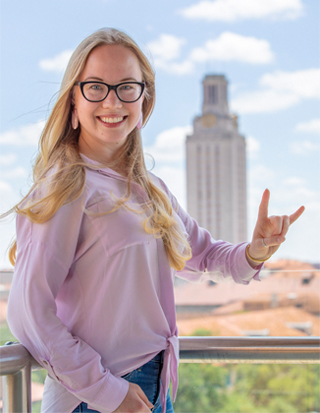 I was born and raised in Ukraine, in a tiny, tiny town. I knew every corner of the town and every face. Everyone knew each other.

My walk from home to school took only five minutes, and my friend and I would meet before classes to walk together. We had a morning routine to stop by the local grocery, get our lunch and talk about TV shows and books we were watching and reading.

I didn’t have a privileged childhood, so I always had to fight. My first job was in middle school, and since then I have always worked. I got a job babysitting three kids. My parents were getting divorced, and we did not have a stable financial situation. I thought this small side job could assist my mom with getting me ready for graduation. I went to classes for the first half of the day, and then went to work straight after. Neither of my friends worked, and they had a hard time understanding why I could not go out with them or have enough time to help with homework.

My last year of high school, we had to move to east Ukraine because of the war. We left our apartment and all the things we owned behind. I didn’t expect that I would not ever go back, but it has been four years since I last saw the place where I grew up.

I was accepted to the oldest university in Ukraine, but my family and I decided to move here to the United States. It was intense moving from Ukraine. I didn’t know the culture and what was appropriate here. The English I learned was from the textbook, and it’s not the same – it’s not how people talk in normal life. People use words every day, but I could never find them in the dictionary. I had to listen precisely for context.

When my family settled in Austin, it was September 2015. School had already started, and I needed to figure out how to enroll in any kind of higher education. That’s when I thought about community college, and I began taking SAT courses. The first time taking the test, I passed everything except English. The second time, I again couldn’t pass it. By the third time I was ready to give up, but I passed. I finally enrolled in college classes in October.

I thought to be successful, moving into this new environment, I had to become American. I thought that I had to become like everyone else around me. Later I realized, no – I have to be authentic. That’s how I stand out. That’s what makes me different. My first two years, I tried so hard to become someone I wasn’t, but my junior year at UT, when I met the right people, they showed me I was special, that my accent makes me stand out. And I finally realized I can be as successful as everyone else just being myself.

All of my experiences have combined to teach me one important thing – the only way to improve your life is to move forward. Ignore the obstacles in your way.

Every "no" was an opportunity for me to become who I am now. 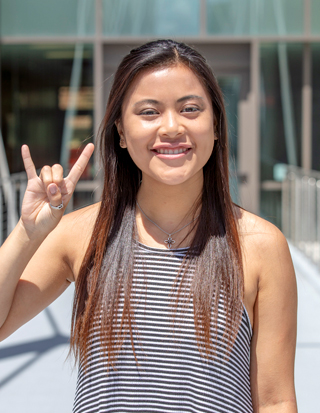 I was convinced I was going to be a doctor. I guess that’s just the idea I had ever since I was young.

My ninth-grade biology class – that was my first real science class, and I knew that was not for me. What’s the point in memorizing all those facts and numbers?

My brother, Charles, went to The University of Texas for business, so I figured I’d follow in his footsteps. I applied to the Moody College of Communication, and my whole thought process was that I would transfer to business after my freshman year. Then I took calculus and microeconomics, and those were the hardest classes I’d ever taken, mostly because I was not interested or motivated to learn about the particular topics. When I struggled to bring myself to study the material, I realized business was also not for me.

I originally started at Moody as a corporate communications major, but I transferred to advertising. I talked to my brother, once I knew business was not supposed to happen, and he suggested advertising because I was already at Moody. He knew the Stan Richards School was highly ranked.

When the application came out for TexasCreative, my friend and I applied on a whim, but we ended up getting in. That’s when things clicked for me.

I trust my brother. I talk to him about big life decisions, and even my small ones. He encouraged me to see advertising through, because he knew there was potential in the industry where I could find something where I fit. He was happy that I found a career path I enjoyed.

This summer, I interned at R/GA Chicago, a big agency. I worked as a strategist there. It was interesting to see a different side of the industry and work with professionals in the agency life. The whole experience confirmed that I want to go to a big agency after I graduate.

I’d like to blend the creative side and the strategic side. I think you can be open to different paths in advertising.