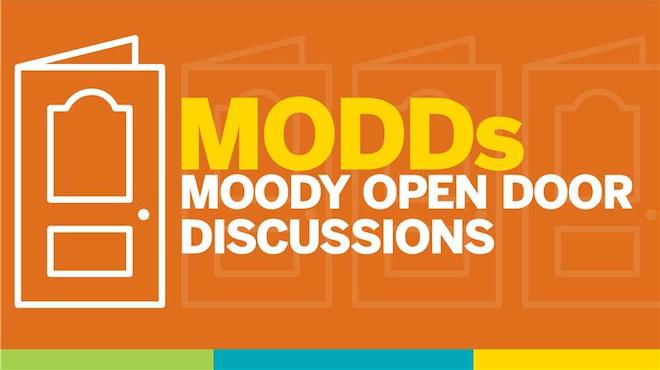 MODDs are designed so students and faculty can connect, ask questions and learn more about each other. Students, we encourage you to seek this opportunity to learn more about Moody College and how your curiosities fit into the whole spectrum of communication.

You are welcome and invited to register for a MODD session featuring any faculty member, including those outside of your major, as well as the Dean's Office team.

MODDs are conducted online via Zoom. Participation is limited to 12 students.

Please register online -- and encourage your friends to do the same.

Each academic unit and the Dean's Office will conduct at least one MODD session per week, from Sept. 21 to Nov. 23.

Wednesday, March 10, 4 p.m.: Michael Butterworth - "The Politics of the Playing Field: Why We Can't Stick to Sports"

Wednesday, March 24, 4 p.m.: Cassandre Alvarado - "What the most successful students do"

Thursday, March 25, 3 p.m.: Johanna Hartelius - "Expertise in Public Discourse: Why is it so contentious?"

Thursday, April 8, 6 p.m.: Joshua Barbour - "Mapping the Web of Connections that Shape Who You Are, What You Do, and Why"

Wednesday, April 28, 3 p.m.: Josh Gunn - "The Persuasion of Conspiracy: QAnon and Beyond"