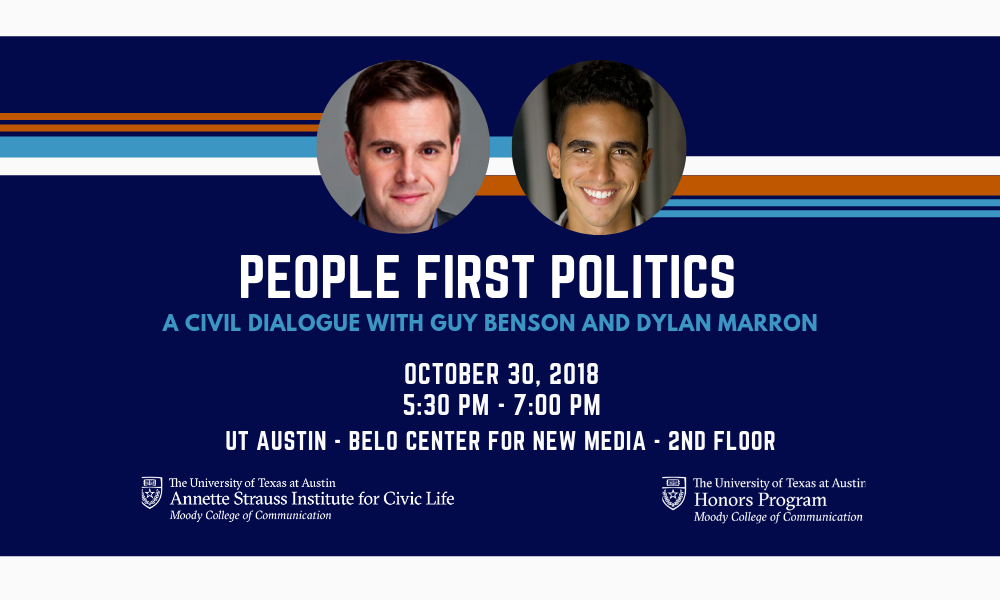 Guy Benson is a well-known millennial conservative and co-author of “End of Discussion,” whose work is praised by the likes of Fox News hosts Tucker Carlson and Dana Perino. Dylan Marron is a passionate critic of transphobia and the underrepresentation of minorities, famous for webcasts with titles like “Sitting in Bathrooms with Trans People” and “Conversations with People Who Hate Me.”

Though they seem to be worlds apart politically, both believe strongly in fostering meaningful conversation through mutual respect. Join us on Tuesday, October 30th at the Belo Center for New Media as we learn about how two media sensations are bridging the divide and tackling tough topics, one conversation at a time.

Sponsored by the Annette Strauss Institute for Civic Life and the Moody College Honors Program, the event is meant to promote their shared missions of fostering civic engagement and critical dialogue on matters of public importance, and in particular among the students who will be tomorrow’s leaders.

Guy Benson is the Political Editor of Townhall.com and a Fox News Contributor. He co-authored End of Discussion in 2015, an updated edition of which was published by Random House in 2017. He is a familiar voice on the nationally-syndicated Hugh Hewitt radio show -- which he regularly guest hosts -- and contributes to NPR's All Things Considered. A fixture on the national speaking circuit, Guy was named to Forbes magazine's 30 under 30 law & policy list in 2015. The Huffington Post included Guy in its 2017 roster of the 25 top millennial broadcasters in American news and politics. That same year, he received the College Republican National Committee's biannual Lee Atwater Outstanding Young Conservative award. Guy served as a Media Fellow at Stanford University's Hoover Institution, and a Visiting Fellow at Harvard University's Institute of Politics.

Dylan Marron is an IFP Gotham Award and Drama Desk-nominated writer, performer and video maker. He is the voice of Carlos on the hit podcast Welcome to Nightvale, an alum of the New York Neo Futurists, and the creator of Every Single Word (Tumblr’s “Most Viral Blog” of 2016 and Short Award Nominee). In 2017 Dylan launched his Podcast “Conversations with People Who Hate Me” - in conjunction with Nightvale – where Dylan engages his internet trolls in a lively and funny way. The podcast has been a hit and racked up 2,000,000 downloads and a New York Times magazine profile of Dylan to boot. Dylan is a writer, correspondent and the most recognized face of Seriously.tv, where he created the viral smashes “Sitting in Bathrooms with Trans People,” “Shutting Down Bullsh*t,” and his signature “Unboxing” series.

At the event on Oct. 30, Guy and Dylan will share their ideas about healthy dialogue across difference, followed by a Q&A session led by a table of student respondents selected from the New Politics Forum (an initiative of the Strauss Institute) and the Moody College Honors Program. After the Q&A led by student respondents, the floor will be opened for questions from the audience.

This event is free and open to the public and is sponsored by Annette Strauss Institute for Civic Life and the Moody College Honors Program at The University of Texas at Austin.

The University of Texas at Austin

Registration details: Free, but please register so that we might have enough snacks for everyone!

Who should attend? Students from any Texas college or university are encouraged to participate. Members of the public are also welcome.

Please be advised that New Politics Forum events may be photographed and/or filmed. Your attendance constitutes your authorization for NPF to use your photograph, voice, or other likeness for purposes related to the mission of the program including but not limited to marketing and promotion in both print and electronic forms.

Please request ASL or ADA accommodation in advance by contacting Taylor Foody at 512-471-2135 or via email at taylor.foody@austin.utexas.edu.