The Woman Behind the White Coat

The Woman Behind the White Coat

The Woman Behind the White Coat: Mary Beth Bennett 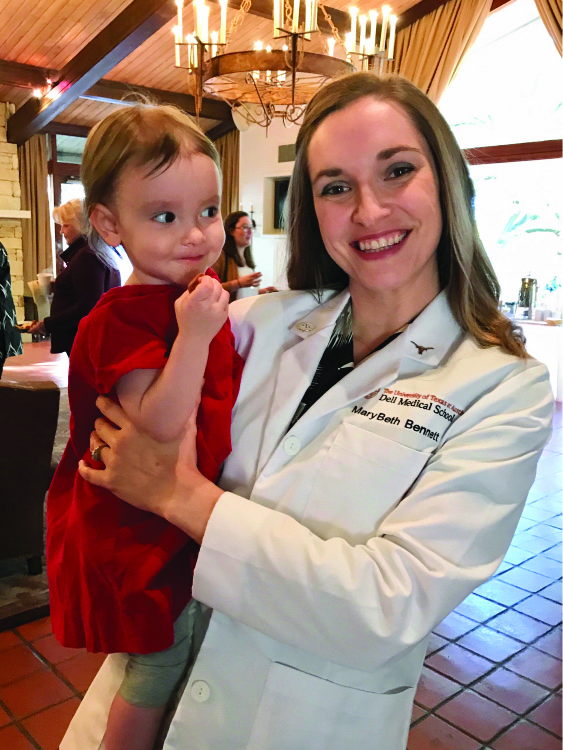 Guided by a passion for persuasion and the art behind ads, Mary Beth Bennett was drawn to the creative advertising program at Southern Methodist University after high school. Already an exceptional student, she was offered a scholarship from the President’s Scholars Program, the University’s highest academic merit awarded to 20-25 of the most gifted incoming first-years. As an awardee, Bennett received full tuition for the regular academic year as well as a semester abroad, which she spent in Paris, France as a double-major in French.

Upon graduating from SMU in May of 2008, Bennett traveled as far as New York, San Francisco, and even back to Paris in search of copywriting internships. At home during the year, Bennett worked in a restaurant and met Adam, her now husband, who was attending law school alongside her brother’s wife in Cincinnati. The two maintained a long-distance engagement after the summer of 2009 while Bennett began grad school at UT.

Events in her personal life caused Bennett to take a particular interest in women’s health issues and the skills needed to take on her dream role of a marketing director for a non-profit. Courses such as non-profit communication management attracted Bennett to the advertising masters program and RGK Portfolio Program in Nonprofit Studies here in Austin. This certification was open to graduate students willing to put in the work for ten to twelve credit hours and an optional thesis. Bennett conducted a study on the promotion of the Texas Medicaid Women’s Health Program. Here she met Dr. Mike Mackert, who worked with her on diving into the policies and communication strategies of the program. Dr. Minette Drumwright is credited as thesis supervisor and a “real mentor” by Bennett.

With her masters, Bennett worked for the University on a project called the Dell Social Innovation Challenge as program coordinator. She got involved in the social innovation start-up scene while working with students from around the world; setting up mentorships, evaluating business plans, and awarding prize money. Health-related enterprises were catching Bennett’s eye as she heard about a new med school being built nearby.

After the birth of her first child, a son, and transitioning to a new job with a software company building online communities for non-profits, Bennett was pregnant once again with a girl. Her past experience in women’s health and the desire to set a strong example for her daughter brought Bennett back to the thought of med school. She signed up for a single biology course, which she attended at night after work.

“I didn’t have any confidence at first. I sat down in my first chemistry course next to a woman and asked her ‘what do you want to be?’ She said ‘I think a neurosurgeon,’ and I’m like ‘Great… I just think I want to be a med student!’ I’ve always loved the human body, but no one had ever told me ‘you could be a doctor!’"

With so many new female role models in the medical field, and knowing herself as a truly hard-worker, Bennett “retired” from the software company and went back to school full-time. Over the course of eighteen months, she had fulfilled all remaining pre-requisites to apply for med school. In one summer, Bennett juggled Chem 1, Chem 2, General Chemistry Lab, Physics 1, and Physics 1 Lab.

The next fall, Bennett was taking twelve hours of science while pregnant with her third child. Studying for just over a month, she took the MCAT and earned a score worthy of interview invitation from med schools all over the state. After taking a year to visit potential schools and enjoy maternity leave, Bennett found her home at Dell Medical School.

“The people at Dell Med really saw my advertising and communication background as a positive, added value. If you want to go work for a few years before med school I don’t think that will hurt you, in some cases I think it can really help. But not all schools see it that way. Dell Med is different because they prioritize innovation and good communication, both between doctors and patients and from a public health standpoint.”

As a student, Bennett says life is busy. Everyone in the cohort participates in interactive lectures, team-based learning through case studies, anatomy labs and self-paced study.

Dell Medical School’s leading-edge curriculum fits basic science into the first year allowing students to begin clinical clerkships in their second year rather than the third, as is in traditional programs. The time gained by compressing the basics is used in the third year as an innovation block that can be used for a community project or a dual degree, like a Masters in Public Health, Business Administration, Biomedical Engineering, or Educational Psychology; something interdisciplinary that prepares them to make an impact in healthcare and beyond. After discovering Dr. Mackert had been named director of the Center for Health Communication at a Dell Med All-Hands Meeting, Bennett thought “This is fantastic! My third year project has to be with the Center!”

What would you consider the top three struggles you’ve encountered during your first year as a med student?

“First I’d say the realization of fears. I knew there was a chance I’d become a hypochondriac, but I didn’t realize the extent to which it could be somewhat paralyzing. If you learn something about your family and this condition comes up in class a few days later, it can be scary. I was learning about these devastating diseases with very sad outcomes around the time my young daughter started realizing what death is. She’d come up to me saying things like ‘Mommy I don’t want you to die. Never die.’ Having that at home and being in med school it wasn’t surprising I was facing my own mortality and becoming worried about health.

Second, well I’ll start by saying I’m pleased that I’ve still been able to spend time with my family and have a life outside of school, but it’s hard as a non-traditional student to have the same amount of connection with the class as someone without a family. While I do have connections with classmates and a lot of support from them, I’m aware that I’m not able go out with them as part of the social pack.

Lastly, and I spoke on this in a panel the other day to perspective med students, Dell Med relies on the students a lot. We’re the ones that really staff the interview days and take tours around, but we also want to be a part of lectures and go to meetings. We want to volunteer, shadow, and hear speakers, but especially for someone like me, sometimes there’s just no time. I can do basically nothing more than be a mom and be a med student. The biggest downside I see is that I wish I could do more.”

How have you managed to find a balance between school and your personal life?

“Like I mentioned, I have a lot of school support. My classmates are wonderful and they all bring a diversity to the cohort. That being said, I have high expectations of myself and I want to do the best I can for my family so there is pressure.

For the first time in my life, I experienced anxiety in the first few months of med school. It’s not easy but you learn things about perspective, mindfulness, breathing, and being calm in these situations that I hope will serve me later in life. I have to take time to just watch a TV show. I’ve started to do yoga more, which is something I’ve always known to be good for me but I’ve just never put it into play, getting more and better sleep, drinking less alcohol or caffeine, and just being a little more intentional about my health.

Some days you think ‘I could either do advanced prep for this class or do something that’s just for me and sometimes you just have to choose you. It doesn’t mean you’re a bad person or a bad student, you just have many priorities along with med school.”

Is there a way to know when it’s time to choose yourself?

“My guide is, honestly, if it’s not due tomorrow and the kids are at school I’ll take the time for myself when I need it. You have to find time to prioritize yourself and realize it will have to be intentional. But for me it’s only on weekdays, the weekends are impossible in my house.”

Do you have any advice for other, or potential, med students?

“I feel like a lot of people are worried about how competitive they’re going to be. Because of my life and other field experience, I had less background in healthcare volunteering or working in clinics than others. I did some shadowing, but really just what was required. There are places like Dell Med that view everything holistically so even if you haven’t done hours of volunteering or research, if you’ve spent your time doing something you’re really passionate about, it’ll be appreciated.

Also, let’s face it. This is hard. A lot of people who hear about my story are like ‘Oh my goodness, how have you done that? You’re Superwoman!’ but I really don’t want people to think that it’s been without effort. Nobody’s perfect. No one can pull everything off without a hitch. There are hard days, and we can only get through them by relying on others."

Bennett reports a love for her current courses and an excitement for plans post-graduation. She is now particularly passionate about women’s health issues during the time of their first pregnancy. From breastfeeding to postpartum depression, she hopes to gain experience as a pediatrician that, in combination with her own lessons through motherhood, will help her affect policy in the future while providing high-quality care to women and children.