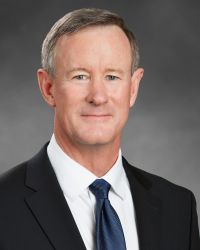 University of Texas System Chancellor William H. McRaven, a retired U.S. Navy four-star admiral, leads one of the nation’s largest and most respected systems of higher education. As the chief executive officer of the UT System, Chancellor McRaven oversees 14 institutions that educate 221,000 students and employ 20,000 faculty and more than 80,000 health care professionals, researchers and staff.

Since he became chancellor in January 2015, Chancellor McRaven has recommitted the UT System and its institutions to improving the lives of Texans and people all over the world through education, research and health care.

McRaven’s ambitious vision for the UT System includes nine  “Quantum Leaps,” that address many of the most significant challenges of our time, including building the nation’s next generation of leaders through core education in leadership and ethics; leading a brain health revolution by accelerating discoveries and treatments for neurological diseases; elevating higher education’s role in national security; driving unprecedented levels of collaboration between higher and K-12 education; and increasing student access and success.

Prior to becoming chancellor, McRaven was the commander of U.S. Special Operations Command during which time he led a force of 69,000 men and women and was responsible for conducting counter-terrorism operations worldwide. McRaven also is a recognized national authority on U.S. foreign policy and has advised presidents George W. Bush and Barack Obama and other U.S. leaders on defense issues. And his book, “Spec Ops: Case Studies in Special Operations Warfare: Theory and Practice,” published in several languages, is considered a fundamental text on special operations strategy.

McRaven’s military legacy goes beyond strategy and warfare. As commander of U.S. Special Operations Command, McRaven spearheaded the creation of the Preservation of the Force & Family initiative to ensure the mental, spiritual and physical well-being of those who serve, as well as their families. His wife, Georgeann, has dedicated much of her career to playing a leadership role with military families and wounded warriors.

McRaven has been recognized for his leadership numerous times by national and international publications and organizations. In 2011, he was the first runner-up for Time magazine’s Person of the Year and was named Texan of the Year by the Dallas Morning News. In 2012, Foreign Policy magazine named McRaven one of the nation’s Top 10 Foreign Policy Experts and one of the Top 100 Global Thinkers. In 2014, Politico magazine named McRaven one of the Politico 50, citing his leadership as instrumental in cutting though Washington bureaucracy.

He also has received the Republic of France’s Legion d’Honneur, the Federal Law Enforcement Officers Association’s National Award and the National Intelligence Award.

More recently, in 2015, the Intrepid Sea, Air & Space Museum selected McRaven to receive the Intrepid Freedom Award for his distinguished service in promoting and defending the values of democracy. Also in 2015, he was presented with the Distinguished Service Award from the FBI Agents Association, which represents more than 13,000 active and retired FBI Special Agents. In 2016, McRaven was named the recipient of the Ambassador Richard M. Helms Award by the Central Intelligence Agency Officers Memorial Foundation.

Born in North Carolina, the son of an Air Force colonel, McRaven spent most of his childhood in San Antonio where he graduated from Roosevelt High School.

McRaven graduated from The University of Texas at Austin in 1977 with a degree in journalism and received his master’s degree from the Naval Postgraduate School in Monterey in 1991. In 2012, the Texas Exes honored McRaven with a Distinguished Alumnus Award.

He met his wife, Georgeann, while they were students at UT Austin, and they have three grown children.