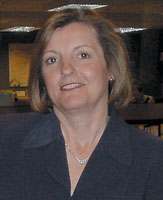 Walsh earned a bachelor's degree in journalism from The University of Texas at Austin. During her time at the university she served as editor of The Daily Texan. She is also a member of the Friar Society.

Walsh began her career at CBS News as assistant to the political director in Washington, D.C. In her time as a journalist she has covered some seminal stories, including the explosion of the space shuttle Challenger, the bombing of Pan Am Flight 103 and then-Vice President George H.W. Bush’s successful campaign for president.

Now national security producer for CBS News, the two-time Emmy winner produces stories for "The CBS Evening News" and "60 Minutes." Walsh has also been assigned to the Pentagon since 1993 covering the American military throughout Southeast Asia, Europe and the Middle East. Her outstanding work has won her two Alfred I. DuPont awards from Columbia University, the Joan Shorenstein Barone Award for Excellence in Journalism and a Wilbur Award from the Religious Communicators Council.

When asked in 2006 if she could change anything about the journalism profession, Walsh said, “I would go back to the days when television news was considered a public service and not a profit center for the networks. Sometimes we worry too much about how much a story will cost rather than the best way to cover it.”