The Moodys of Galveston are among the most distinguished Texas families. Through hard work and commitment to family, the Moodys established one of the most prosperous entrepreneurial and philanthropic legacies in the country and have come to represent the essence of Texas and the notion that learning and innovation can spark civic transformation.

Their story begins in Virginia, where Col. William Lewis Moody, owning not much more than a law degree from the University of Virginia, ventured west in 1852 seeking opportunity and a comfortable place to settle a family. After visits to Austin, San Antonio and Houston, he decided on Galveston because of its potential as a port and mercantile center.

Col. Moody started the family business in the 1850s through cotton trading, and it was brought into the 20th century by his son, W. L. Moody Jr., who expanded their business with credit lending, banking and the development of a national insurance company. Mary Elizabeth Moody Northen, Col. Moody’s granddaughter and eldest child of W. L. Jr. and Libbie Rice Shearn, ushered the family’s interests into the 1980s, and they endure today in numerous businesses, nonprofits and family trusts still operated by Moody descendants. 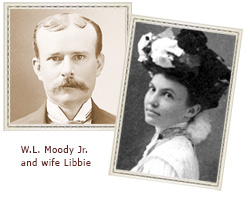 Family loyalty stood behind the Moodys’ success in business. The Moodys understood they were only as good as their name, and instilled this lesson to their children. “All that is accomplished in life is by will, by effort, by patience, by perseverance,” Col. Moody once wrote to his son, W. L. Jr. “Riches will not buy wisdom.”

In a chaotic Galveston cotton market in the 1860s and 1870s, Col. Moody gained prestige as an honorable and principled businessman who grew to be influential among his peers because of his cool, clear-headed nature. 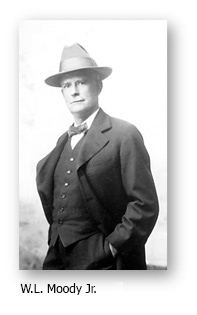 When W. L. Jr. joined the family operation in 1886, the Moodys had already expanded into banking – first with the opening of Moody Bank and later through a merger with the National Bank of Texas. W. L. Jr. quickly demonstrated his financial genius, and he began to take charge of the wide-ranging Moody enterprises in the 1890s.

W. L. Jr. focused his energy on growing the family business, often working every day of the week except Sunday. He and his wife Libbie had four children – Mary Elizabeth, William Lewis III, Shearn and Libbie. 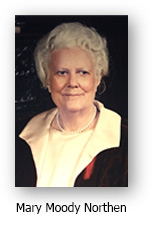 As Mary Elizabeth grew up, W. L. Jr. educated her on the intricacies of finance and corporate politics. By the 1940s, Mary Elizabeth Moody Northen, who had married Edwin Clyde Northen, was taking a prominent role in the family business, and W.L. Jr. had placed her on the boards of several Moody companies.

When W. L. Jr. passed away in 1954, Northen became his designated successor. She oversaw more than 50 national corporations, including as president of the American National Insurance Corporation. 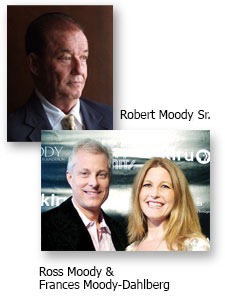 Northen continued the work of the Moody Foundation, which W. L. Jr. established “to benefit in perpetuity present and future generations of Texans.”

The Moody Foundation grew to be one of the largest private foundations in Texas, awarding grants across Texas to private colleges and universities, children’s health projects, preservation projects and libraries.

Northen served as a foundation trustee until her death in 1986. Since then, the Moodys’ businesses have remained in family hands. Northen’s nephew, Robert L. Moody Sr., has continued to direct the family’s Foundation along with his children, Ross R. Moody and Frances Moody-Dahlberg.

Currently, all three serve as trustees of the Moody Foundation, which continues to provide grants primarily in Austin, Dallas, Galveston and Houston with an emphasis on education, social services, children's needs and community development.

More information can be found at the Moody Foundation website -  moodyf.org